George Floyd has been identified as the Minnesota man who died in police custody after a harrowing video showed a Minneapolis police officer kneeling on the back of his head and neck for several minutes. Floyd, who was 46, was identified as the victim by his sister on Facebook. Floyd was a beloved security guard at a Minneapolis bar.

Attorney Benjamin Crump, who has represented the families of several victims in civil rights cases, including the families of Trayvon Martin and Michael Brown, said on Twitter, “We have been informed that the man killed by Minneapolis police was named George Floyd. #JusticeForFloyd #icantbreathe.”

Crump will be representing Floyd’s family. He said in a statement, “We all watched the horrific death of George Floyd on video as witnesses begged the police officer to take him into the police car and get off his neck. This abusive, excessive and inhumane use of force cost the life of a man who was being detained by the police for questioning about a non-violent charge.”

The incident occurred on Memorial Day, Monday, May 25, in the 3700 block of Chicago Avenue South, Minneapolis Police say. The Minnesota Bureau of Criminal Apprehension and the FBI are investigating Floyd’s death.

The officer in the video seen kneeling on Floyd has been identified by the Minneapolis Star Tribune as Officer Derek Chauvin. Chauvin’s partner, Tou Thao, can be seen in the video ignoring bystanders who were begging Chauvin to get off of Floyd. A photo shows two other unidentified officers, who are blocked by the SUV in the video, were also holding Floyd down.

Read more about the incident and Floyd’s life below. Warning: the video footage in this post is disturbing.

The Video Shows Floyd Saying ‘My Stomach Hurts, My Neck Hurts, Everything Hurts’ & ‘I’m About to Die’

Video of the incident was posted on Facebook. Floyd can be seen on the ground near a police SUV, yelling out that he is in pain. “Please, please, please I can’t breathe, please man,” Floyd can be heard saying, while moaning and crying. The officer, Chauvin, can be seen with his knee pressed into the back of Floyd’s head and neck while another officer, Thao, walks around.

As bystanders record the incident and beg the officers to let him up and to let him breathe, Floyd cries out, “I’m about to die.” Chauvin tells him to relax and asks, “what do you want?” Floyd then responds, “I can’t breathe. Please, the knee in my neck, I can’t breathe sir.” Floyd then calls out “momma” as Chauvin yells at him. Floyd then says, “my stomach hurts, my neck hurts, everything hurts,” and asks for water.

According to Minneapolis Police, officers were called at 8 p.m. for a report of a “forgery in progress.” Police said in a statement, “Officers were advised that the suspect was sitting on top of a blue car and appeared to be under the influence.” Floyd was not armed.

Police said in the statement, “Two officers arrived and located the suspect, a male believed to be in his 40s, in his car. He was ordered to step from his car. After he got out, he physically resisted officers. Officers were able to get the suspect into handcuffs and noted he appeared to be suffering medical distress. Officers called for an ambulance. He was transported to Hennepin County Medical Center by ambulance where he died a short time later.”

A photo from the other side of the street shows two other officers kneeling on Floyd and holding him down during the incident. One officer has his knee near Floyd’s back and the other is holding down his legs. Those officers have not been identified. They are blocked from view by the police SUV in the video:

Police were called to Cup Foods at 3759 Chicago Avenue, the Star Tribune reports, citing police scanner audio. The call was for someone trying to pay with a counterfeit bill there. According to the scanner audio, officers found a man matching the description of the suspect sitting on the hood of his car.

The incident was recorded on police body camera, according to the department.

We have been informed that the man killed by Minneapolis police was named George Floyd. #JusticeForFloyd #icantbreathe pic.twitter.com/76e3UA9JAK

Minneapolis Police Chief Medaria Arradondo said at a press conference Tuesday morning that he contacted the FBI to investigate after receiving unspecified “additional information” about the incident. “They will be taking the lead in this investigation,” he said. “This is very impactful to so many involved and as chief we will be cooperating fully. The Minneapolis Police Department will cooperate fully.”

Chauvin and Thao have been placed on paid leave. The Hennepin County Attorney’s Office issued a statement Tuesday saying prosecutors are assisting in the investigation. “At the end of the investigation, the findings will be presented to our officer for consideration for prosecution. We promise a thorough, expedited review consistent with our ongoing commitment to justice. Every person is entitled to fairness; no person stands above the law.” 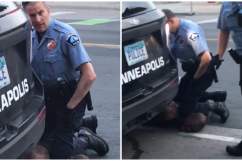 He Was Known as ‘Big Floyd,’ Originally From Houston, Texas, & Worked at a Minneapolis Restaurant as a Security Guard

Floyd’s sister, Vanita Williams-Dabney, wrote on Facebook, “My bro was killed by Minneapolis police on Memorial Day …R I.P. bro we will get Justice for u ..gone2soon ..loveU4life.”

According to his Facebook page, Floyd was originally from Houston, Texas. He was known by the nickname “Big Floyd.”

DEVELOPING: We are hearing from George Floyd’s roommate here in MN, “it’s real painful to see… he wasn’t a bad person.” He says they both worked together at the Conga Latin Bistro in #Mpls #GeorgeFloyd pic.twitter.com/4RcatEuuTj

A woman who said she is a regular at the restaurant wrote on Facebook:

If you have ever been to Conga or just had the honor of meeting the gentle giant we call Floyd please stand with us. Everyone who knows him knew he loved his hugs from his regulars when working as a security guard and would be mad if you didn’t stop to greet him because he honestly loved seeing everyone and watching everyone have fun. I remember him taking care of me when drunk to make sure no one would try to get too close without my approval and on the days I didn’t bring extra change for coat check he would keep my stuff in his closet and made sure I got it back. He made a mistake, had a bad day maybe but did not deserve to die at the hands of mpls police at that.

Christina Unique Dawson wrote a tribute to Floyd on Facebook, “They really killed my baby!! 😭😭I don’t even know what to do y’all!! This is not real! And all I can think is if I would have seen that video!! He would have just been another black dead body in the hospital!!”

Another frequent patron wrote on Twitter, “RIP Big Floyd. Thanks for treating us like royalty at Conga. This happens to too many people we know in our cities. No 1deserves that. No 1. Man I wish I wouldn’t have seen that video. to find out it was the security guard who made us feel safe at Conga just sucks.”

RIP Big Floyd. Thanks for treating us like royalty at Conga. This happens to too many people we know in our cities. No 1deserves that. No 1. Man I wish I wouldn’t have seen that video. to find out it was the security guard who made us feel safe at Conga just sucks. 😔#GeorgeFloyd

Another wrote, “He was the most polite and respected bouncer.”

Minneapolis Mayor Jacob Frey said in a statement on Tuesday, “Being black in America should not be a death sentence. For five minutes, we watched as a white officer pressed his knee into the neck of a black man. For five minutes. When you hear someone calling for help, you are supposed to help. This officer failed in the most basic human sense.”

Frey added, “What happened on Chicago and 38th last night is awful. It was traumatic. It serves as a reminder of how far we have to go. Whatever the investigation reveals, it does not change the simple truth, he should still be with us this morning.”

Governor Tim Walz said on Twitter, “The lack of humanity in this disturbing video is sickening. We will get answers and seek justice.”

Minneapolis activist Nekima Levy-Armstrong told the Star Tribune, “It just reminds me of Eric Garner once again: a black man being accosted by police and pleading for his life saying he couldn’t breathe. I’m fully convinced that if police wouldn’t have been called to the scene, then he would still be alive.”

Arradondo said he and other department leaders would be meeting with stakeholders and provide as much information as possible. “There is clearly going to be a time for healing, but in order for that to even begin, we have to recognize the impact that this has had on our city,” the police chief said.

Levy-Armstrong told the newspaper, “Whatever the man may have done should not have ended in a death sentence. What started as an alleged economic incident once again turned deadly for a black man.”

Loading more stories
wpDiscuz
0
0
Would love your thoughts, please comment.x
()
x
| Reply
George Floyd has been identified as the Minnesota man who died in police custody after a video showed him saying "I can't breathe," and an officer kneeling on the back of his head.