Twitter/@Stribjany A Minneapolis man lies on the ground following a police incident.

Dramatic video has emerged in which a man is pinned on the ground by a Minneapolis police officer and repeatedly says he can’t breathe before he stops speaking and moving altogether. Police say he later died at the hospital.

BREAKING: A video shows a Minneapolis police officer pinning down a black man by the neck with his knee for several minutes as the man screams: "I can't breathe."pic.twitter.com/V9K3IU36ap

A longer version of the video was posted on Facebook:

A photo from the other side of the street shows two other officers kneeling on Floyd and holding him down during the incident. One officer has his knee near Floyd’s back and the other is holding down his legs. Those officers have not been identified. They are blocked from view by the police SUV in the video:

In the video, filmed at the intersection of Chicago Avenue and East 38th Street in Minneapolis about 8 p.m. on Monday, an African-American man, now identified as Floyd, can be heard saying he can’t breathe as a white officer pins him down by the neck for several minutes.

The man can be heard calling out for his mother.

Bystanders are heard pleading with the officer on the scene to let the man breathe.

“Why you got to hold him down? He’s not even resisting arrest.

“He’s not doing nothing, he was just getting in the car.”

“His nose is bleeding,” a female voice says.

“Get him in the car,” the male bystander’s voice continues.

A male police officer then replies, “We tried that for 10 minutes.”

The witnesses can then be heard saying, “You’re going to just sit there with your knee on his neck? He’s not moving. Did you kill him?” before the camera centers in on an image of the man’s motionless body, his head resting on the ground and his eyes closed.

Minneapolis Police released a statement saying the man, who was in his 40s, died following a medical incident, claiming he suffered medical distress during a police interaction. They did not immediately release his name or the names of the officers involved. But the officers have been identified by the Star Tribune as Chauvin and Thao. 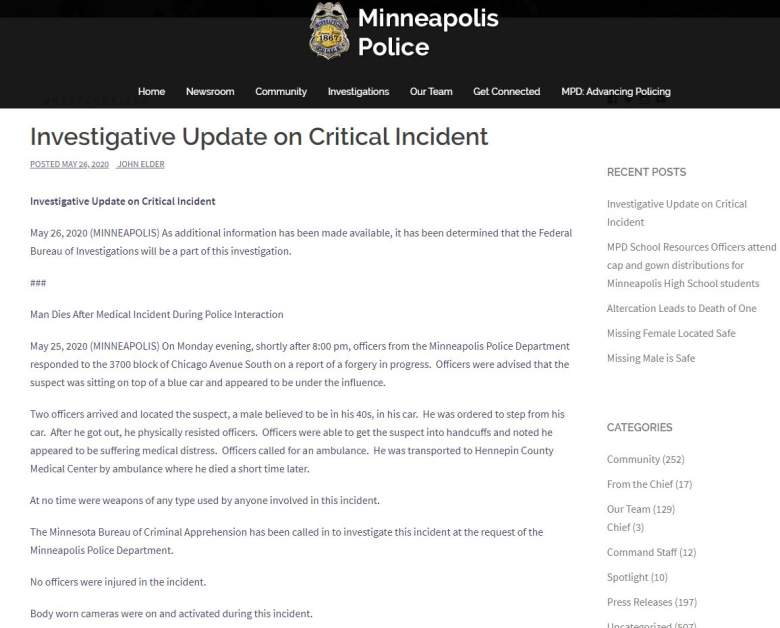 The statement said officers were responding to reports of a forgery in process and that the man, who “appeared to be under the influence … physically resisted officers.”

“Officers were able to get the suspect into handcuffs and noted he appeared to be suffering medical distress. Officers called for an ambulance. He was transported to Hennepin County Medical Center by ambulance where he died a short time later,” according to the statement.

The statement confirmed that no weapons were used during the incident and no officers were injured.

Minneapolis Police say the FBI has now joined with the Minnesota Bureau of Criminal Apprehension to investigate the incident.

An update from the department’s PIO: pic.twitter.com/DZDLHp99Wd

Police were called to Cup Foods at 3759 Chicago Avenue, the Star Tribune reports, citing police scanner audio. The call was for someone trying to pay with a counterfeit bill there. According to the scanner audio, officers found a man matching the description of the suspect sitting on the hood of his car.

Minneapolis Mayor: ‘This Officer Failed in the Most Basic Human Sense’

News One reports that social media users “quickly accused the Minnesota Police Department of killing the suspect. Some said the suspect was suffocated. Others described it as being choked.”

The incident was livestreamed on Facebook. In the original video posted online, Facebook user Darnella Frazier says “they killed him right in front of cup foods over south on 38th and Chicago! No type of sympathy. #POLICEBRUTALITY.”

Minneapolis Star Tribune reporter Libor Jany, who has been posting regular updates following the event, said the bystander video “casts doubt on the police’s account and raises questions about whether their aggressive takedown led to the man’s death.”

For now, the case is in the hands of the FBI and BCA. The department will also likely undertake its own internal investigation into whether policy was followed. In the meantime, officers involved have been put on paid administrative leave.

Minneapolis Mayor Jacob Frey addressed the incident in a Tuesday morning press conference, calling it “simply awful” and saying “it was traumatic and it serves as a clear reminder of just how far we have to go.” Frey said:

I believe what I saw, and what I saw was wrong at every level. This does not reflect the values that Chief Arradondo has worked tirelessly to instill. It does not represent the training we’ve invested in or the measures we’ve taken to ensure accountability.

Being black in America should not be a death sentence. For five minutes, we watched as a white officer pressed his knee into the neck of a black man. For five minutes. When you hear someone calling for help, you are supposed to help. This officer failed in the most basic human sense.

More information will be posted as this story develops.

Loading more stories
wpDiscuz
0
0
Would love your thoughts, please comment.x
()
x
| Reply
Dramatic video has emerged of a Minneapolis man's death as he is held down by a cop and appears to struggle for breath.