FBI The FBI is seeking the "Granddaddy Bandit" after two bank robberies in Houston.

A man dubbed the “Granddaddy Bandit” is being sought by the FBI after two bank robberies in Houston. Authorities say the unidentified man robbed two banks in January 2022 and has not been located. The man showed a concealed handgun to bank tellers in both robberies and stole an undisclosed amount of money, the FBI’s Houston field office said in a press release on January 24.

“The FBI Violent Crime Task Force seeks the public’s help in identifying and locating an armed suspect dubbed the “Granddaddy Bandit” who struck two Houston banks on Friday, January 21, 2022. Crime Stoppers of Houston is offering a reward of up to $5,000 for information that leads to the identification and arrest of the suspect,” FBI Houston said in a statement.

According to the FBI, “Witnesses describe the ‘Granddaddy Bandit’ as a white male, approximately 5’9” or 6’0” tall in his mid to late 50s or early 60s, with a medium to heavyset build. He wore a black baseball-style cap with a Texas Tech University logo on the front, a black or dark color long sleeve shirt, a COVID style face mask, and dark pants. He was last seen driving a black Ford F-150 single cab pickup truck.”

The FBI added, “Crime Stoppers may pay up to $5,000 for information leading to the identification, charging, and/or arrest of the suspect in this case. Information may be reported by calling 713-222-TIPS (8477), submitted online at www.crime-stoppers.org, or through the Crime Stoppers mobile app. Only tips and calls DIRECTLY TO Crime Stoppers are anonymous and eligible for a cash reward.”

The 1st Robbery Happened at a Chase Bank Branch on Friday, January 21, 2022, According to the FBI

According to the FBI, the first bank robbery happened at the Chase Bank at 12017 Northwest Freeway on Friday, January 21, 2022, about 2:15 p.m. The FBI said the man dubbed the “Granddaddy Bandit” entered the bank carrying a black backpack.

“He walked to a teller station, showed the teller a concealed handgun, and demanded cash. The teller did not have access to money and the suspect left empty-handed,” the FBI said.

The 2nd Robbery Took Place at a Capital One Bank Branch Hours Later, the FBI Says

According to the FBI, the suspect then showed the teller a handgun that he had concealed in his backpack. The teller complied and the suspect ran out of the bank with an undisclosed amount of money, the FBI said in its press release. He left the scene in a pickup truck. 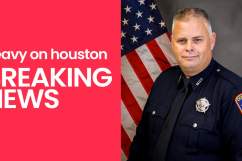 Loading more stories
wpDiscuz
0
0
Would love your thoughts, please comment.x
()
x
| Reply
A man dubbed the "Granddaddy Bandit" is being sought by the FBI after two bank robberies in Houston.