OnScene TV Several people were shot and three were killed during a bloody early morning on January 17, 2022, in Houston, Texas.

Six people were shot and three were killed in four separate incidents in Houston early on Monday, January 17, 2022, police said. Shots were fired in a fifth incident, an attempted robbery at a poker room, during the busy and bloody early morning hours, according to police. There have been no arrests made in any of the shootings as of Monday afternoon. The two homicide victims have not yet been identified. An off-duty Harris County deputy also died of an apparent self-inflicted gunshot wound to the head in an incident outside of a city fire station, police said.

The first shooting occurred about 1 a.m. on Cullen Boulevard. Police responded to a ShotSpotter activation and found a man dead of gunshot wounds, officials said. The second shooting happened about a half-hour later on Curry Road, according to police. Two men were shot during that incident, but both are expected to survive. The third shooting happened just after 5 a.m. on West Little York Road, Houston Police said on Twitter. A man was found dead of gunshot wounds at the scene and a woman was taken to a local hospital in critical condition, according to police.

Officers also responded about 1 a.m. to an attempted robbery at a poker room on Richmond Avenue, where a rifle-wielding suspect fought with a security guard and fired several shots, according to police. No one was injured, police said. Additionally, an off-duty Harris County deputy suffered a gunshot wound while in a pickup truck with her boyfriend, a Houston firefighter, following an argument at a bar just after midnight. The firefighter drove to a city fire station, where 33-year-old Deputy Amanda Crowder was rushed to a local hospital and later died, Harris County Sheriff Ed Gonzalez said on Twitter.

Anyone with information on any of the incidents is asked by the Houston Police Department to contact the Crime Stoppers tipline at 713-222-TIPS or to submit information anonymously at crime-stoppers.org. Detectives are investigating each incident, including the deputy’s death, and Heavy on Houston will provide updates as more is available.

A Man Was Found Dead of a Gunshot Wound on Cullen Boulevard After a Dispute at a Gas Station, Police Say

The Houston Police Department tweeted, “Southeast officers were responding to a ShotSpotter at 6800 Cullen. Officers found one adult male deceased upon arrival from an apparent gunshot wound.” Lieutenant Larry Crowson said at the scene that the officers responded about 1 a.m.

“One of our sergeants was in the area and got there in a couple of minutes,” Crowson said. “When he arrived there was a large crowd at a gas station. He started checking the area and found an adult male in a car here behind me. That adult male is unfortunately deceased here at the scene.” Crowson said homicide investigators were at the scene talking to witnesses and looking for surveillance video.

Crowson added, “The information we have right now is the male was in the parking lot of the gas station when there was some kind of a confrontation with another male. There was at least one shot fired. That’s when our victim was struck. He ran back here and it looks like people in that car were going to try to take him to the hospital. Unfortunately, he expired here at the location.” Crowson said more information would be released as it is available.

A Man Was Killed & a Woman Was Critically Injured in a Shooting at a West Little York Road Apartment Complex, Police Say

Houston Police tweeted about 5:30 a.m., “North officers are on a shooting at 300 W. Little York. One male was found deceased on arrival. One female was transported to an area hospital in critical condition.”

A photo tweeted by the department shows officers at an apartment complex investigating the shooting. No other information about the incident has been released by police.

2 Men Were Shot After Dropping Someone Off at a Curry Road Apartment Complex, According to Police

Houston Police tweeted about 2 a.m., “Northeast officers are on a shooting at 7500 Curry. Two adult males shot and transported to an area hospital.” The shooting happened about 1:38 a.m., according to police.

According to police, two men were dropping someone off at an apartment complex when they were shot at as they drove down a street. One of the victims was shot in the stomach and back and the other was shot in the foot. Both were taken to local hospitals by ambulance. No information about the suspect or suspects was immediately available.

Houston Police responded to Houston Fire Department Station 6 about 12:45 a.m. for a report of a shooting. According to police at the scene, a couple left a local bar, Kung Fu Saloon at 5317 Washington Avenue, and got into an argument while the boyfriend, an off-duty Houston firefighter, was driving.

The girlfriend, an off-duty Harris County Sheriff’s deputy, then shot herself in the head, according to her boyfriend, police said. He pulled over in front of the fire station at 3402 Washington Avenue to get help, police said. Houston Police are leading the investigation.

According to police, the deputy, identified as Amanda Crowder, 33, was taken to a local hospital. Harris County Sheriff Ed Gonzalez tweeted about 4:30 a.m., “An off-duty HCSO deputy sustained a possible self-inflected gunshot wound. She’s currently hospitalized in critical condition. Please keep her and her family in your prayers.” Just after 9:30 a.m., Gonzalez tweeted, “It is with heavy hearts that we confirm the death of our deputy. Please keep her, her family, and our agency in your thoughts and prayers.”

About 10 to 15 Shots Were Fired During an Attempted Robbery at a Poker Room, Police Say

No one was injured in a fifth violent incident in Houston early Monday morning, but several shots were fired. The Houston Police Department tweeted, “Mid West officers are at a robbery scene 9200 Richmond. Suspect with a rifle tried to rob a business and was tackled by a security officer. Rifle discharged during the struggle but no none was hit. Suspect is in custody.” The suspect has not yet been identified by police.

The incident happened at Legends Poker Room at 9275 Richmond Avenue about 1:11 a.m., according to police. Lieutenant Crowson told reporters at the scene that officers initially were told several people had been shot, but learned when they arrived that no one had been injured. “We had a male armed with a rifle come in the door of a poker room, announced that it was a hold-up,” Crowson said. “As he was doing that a security officer was able to get behind him and tackle him.”

Crowson added, “They then started fighting over the gun. As they were fighting over the gun, the gun discharged about 10 to 15 times. Fortunately, no one was hit. There were about 45 to 50 people inside the business when this happened. We are very lucky nobody was shot. The security officer and I believe some other people in the business were able to hold the male down until officers got here and he is in custody. We’re very fortunate nobody was shot.” 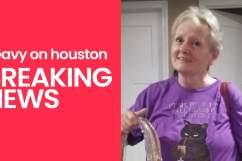