Jimmy and Alyssa Maldonado are among the victims of the Denver and Lakewood gunman. He survived, but she has died, according to posts from loved ones on social media.

Authorities said in a press conference that the gunman first targeted employees of Sol Tribe Custom Tattoo and Body Piercing of Denver.

The two women who were killed in the rampage – Alyssa Maldonado and Alicia Cardenas – were both affiliated with Sol Tribe, social media posts indicated, and Jimmy Maldonado, Alyssa’s husband, works as a body piercer there. Cardenas was a beloved and well-known tattoo artist who owned the business. You can read more about her and the third deceased victim, Daniel Schofield, who was also a tattoo artist, here. The fourth victim has not been named. The fifth victim was a hotel clerk named Sarah Steck, authorities revealed in the press conference. 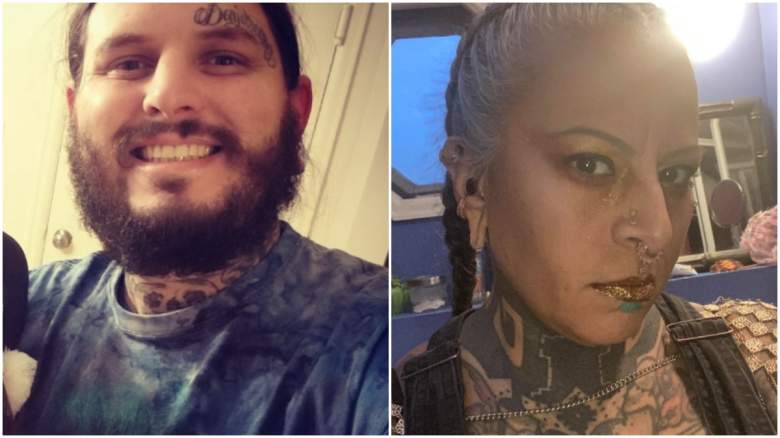 Several of the victims were well-known in the tattoo and body art community, so their names circulated widely on social media in tributes. The suspect was named by authorities as Lyndon McLeod, who once owned a tattoo parlor of his own; he was also an author of violent fiction who knew the victims.

Sol Tribe, which is based in Denver, wrote on its Facebook page, “We’re baaaaaaaack! And ready to make your tattoo dreams come true! Give us a call and let’s get your dermis enhanced.” Schofield was affiliated with Lucky 13 Tattoo & Piercing in Lakewood, according to his Facebook page.

Here’s what you need to know about Jimmy and Alyssa Maldonado:

Jimmy Maldonado Was a Well-Known Body Piercing Artist; He & Alyssa Have a Young Son Together

On its website, Sol Tribe describes itself as “a body art studio committed to offering the safest and cleanest body art available. A modern studio with an ancient feel.”

Kimberley Montoya wrote, “I am soooooo Broken hearted for my Grandson Tenoch 💔💔💔💔💔😥😥😥😥😥His father Jimmy Maldonado was shot in this random tattoo shooting s yesterday in Denver metro area! He is alive thank you God and in ICU!!!! Unfortunately his wife Allisa and owner Alicia did not survive the shooting s💔💔💔💔🙏🙏🙏🙏🙏I asked for prayers for my grandson his father Jimmie that we all love and for all the family members that lost a love one yesterday.”

“Waking up to a message from my brother/friend Jimmy Maldonado family I knew it wasn’t good,” wrote Ernest Burbank on Facebook. “It’s hard to even believe it’s real, I reread the message hoping it was a mistake or the wrong number but it’s all real and so painful to accept. A shooter came to Sol Tribe Custom Tattoo and Body Piercing and began his shooting spree, my beautiful and ceremonial sister Alyssa Gunn Maldonado was shot and murdered along with my friend/tattooing sister Alicia Cardenas owner of sol tribe. Jimmy is currently in the hospital so please keep him in recovery prayers and please give your prayers of comfort for our sisters and their families. I just don’t understand how so much hate can live in people and how the innocent always pay the price. Please tell your friends and family you love them……”

James Maldonado, called Jimmy Maldonado, is featured in an artist bio on the Sol Tribe website: “James ‘El Bato Loco’ Maldonado has been piercing and spreading good vibes in Denver since 1996. He was first apprenticed at Denver’s oldest tattoo shop, Bound By Design, but found his home at Alicia Cardenas’ first shop, Twisted Sol, for many years,” it reads.

“James also did a stint in the world famous and first ever body piercing studio in the United States, Gauntlet, in San Francisco. James is a fully trained and well rounded piercer who can help you with all of your piercing needs including child lobe piercing and specialty genital piercing. In addition to piercing, James is a longtime Denver activist and Aztec Dancer. James has begun offering ritual piercing and cleansings for his clients; please inquire with him about a consultation. James is fluent in Spanish and is passionate about keeping his piercings attainable by all people of all walks of life. Because of the years James has been piercing, he is an excellent resource for problematic piercings and anything piercing-related you could ever need!”

In November, Jimmy wrote on Facebook, “So, I’m officially in my own space. I’m mean I’m still at sol tribe for now, but I have my little spot in the back that’s kinda my space and I’m f***in lovin it! It still needs a little bit more work but once I have it to my liking (which will be never😂) it’s gonna be more dope. Many years ago I worked at a shop here in Denver called Twisted Sol.”

There Were Multiple Shooting Scenes

The first incident was shortly after 5 p.m. December 27, 2021, at 1st and Broadway, Denver’s police chief said in the briefing. Two adult women were shot dead, and one adult male was injured. They were the Sol Tribe victims.

Shortly thereafter, a second shooting occurred at 12th and Williams, where a man was killed. There was also an incident near 6th and Cherokee. Police believe a gun was fired, but there were no injuries, the chief said.

John Romero, public information officer for Lakewood police, said in the news briefing that “we still have a lot of details we’re sorting out at this point.”

Just before 6 p.m., Lakewood police received a call of shots fired at a business along the 1500 block of Kipling. The victim, Schofield, was pronounced dead at the scene. Authorities got a description of the car and the shooter, Romero said.

A little while later, at the Belmar area, Lakewood agents identified the car. When they tried to make contact with the driver, he opened fire on Lakewood agents, who returned fire, Romero said.

The driver then fled on foot to the Belmar shopping area, where he “felony menaced another business with a firearm before retreating to the Hyatt Place,” Romero said. He then shot one of the clerks there, Steck, who later died.

The shooter fled the area again and fired at a Lakewood agent, hitting her. She underwent surgery for a wound to the abdomen. At that time, the shooter was taken down; Romero said it’s not clear whether he was killed by police. He said authorities don’t believe there are additional safety concerns.

“Terrifying night for shoppers as the shooter fled Denver officers to the Belmar Shopping center in Lakewood. The gunman shot at officers and went into a business. He shot a clerk who is now in the hospital and an officer. No word on a motive,” Denver journalist Jessica Porter wrote on Twitter.

Denver police wrote at 6:43 p.m. on December 27, 2021, “ALERT: #Denver officers are investigating a shooting in the area of 1st and Broadway. 2 victims have been located with unknown extent of injuries. No arrests at this time. Updates will be posted as they become available.”

Loading more stories
wpDiscuz
0
0
Would love your thoughts, please comment.x
()
x
| Reply
Jimmy and Alyssa Maldonado are among the victims of the Denver and Lakewood gunman. He survived, but she has died, according to posts from loved ones on social media. Posts indicate that the gunman first targeted employees of Sol Tribe Custom Tattoo and Body Piercing of Denver.