Miami-Dade Police Maxwell Berry was duct-taped on a Frontier Airlines flight after he was accused of assaulting crew members, police say.

Maxwell Berry is an Ohio man who was duct-taped by crew members on a Frontier Airlines flight to Florida after he was accused of assaulting and groping three flight attendants. The incident occurred on a flight from Philadelphia to Miami on July 31, 2021, and was caught on video.

Frontier Airlines said in a statement, “During a flight from Philadelphia to Miami on July 31, a passenger made inappropriate physical contact with two flight attendants and subsequently physically assaulted another flight attendant. As a result, the passenger needed to be restrained until the flight landed in Miami and law enforcement arrived.”

Here’s what you need to know about Maxwell Berry:

1. Max Berry, Who Had Ordered 3 Alcoholic Beverages on the Plane, Spilled a Drink on His Shirt, Returned to His Seat Shirtless & Then Groped a Flight Attendant’s Breasts When She Told Him to Put His Clothes On, Police Say

Frontier passenger allegedly touched 2 flight attendants breasts, then screamed his parents are worth $2 million, before punching a flight attendant. Frontier suspended the crew for duct taping the passenger to his seat as they landed in Miami. 22 yr old Max Berry is in custody. pic.twitter.com/4xS9Rwvafx

Max Berry was on Frontier Airlines Flight 2289 from Philadelphia to Miami, which left Philadelphia about 10:40 p.m. on Saturday and landed in Florida two hours and 37 minutes later, according to a police report obtained by The New York Times. Police said in the report that Berry had consumed two alcoholic beverages on the flight and ordered his third drink.

According to police, Berry touched a flight attendant’s butt with his empty cup and she told him, “don’t touch me.” Police said in its report that Berry spilled his third drink on himself and went to the bathroom from seat 28D, and emerged from there with no shirt on. A flight attendant told him he needed to be fully dressed and helped him find a shirt in his carry-on, police said. 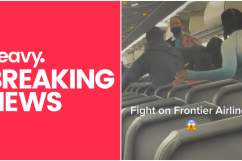 2. Berry Was Restrained by Passengers & Crew Members & Video Shows Him Taped to His Seat & Tied Down With Seatbelt Extenders

Berry was restrained by passengers and crew members using duct tape and seatbelt extenders, according to the police report. He was arrested when the plane landed at Miami International Airport.

Frontier Airlines received backlash after saying in its initial statement that the crew members who restrained Berry had been suspended pending an investigation. The statement said, “The flight attendants will be, as required in such circumstances, relieved of flying pending completion of an investigation.” The airline also initially said “proper policies for restraining a passenger were not followed.”

Flight Attendants have faced an onslaught of disruptions on our flights this year. The situation on Frontier this weekend is one of the worst examples. A drunk and irate passenger verbally, physically, and sexually assaulted multiple members of the crew. When he refused to comply after multiple attempts to de-escalate, the crew was forced to restrain the passenger with the tools available to them onboard. We are supporting the crew.

A second statement added, “Frontier Airlines maintains the utmost value, respect, concern and support for all of our flight attendants, including those who were assaulted on this flight. We are supporting the needs of these team members and are working with law enforcement to fully support the prosecution of the passenger involved. The inflight crew members’ current paid leave status is in line with an event of this nature pending an investigation.” 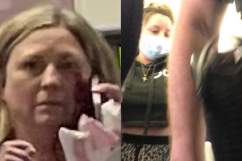 3. Berry Recently Graduated From Ohio Wesleyan University, Where He Was a Member of the School’s Golf Team

Maxwell Berry graduated from Ohio Wesleyan University in Delaware, Ohio, with degrees in finance economics and finance, according to his LinkedIn profile. Berry is from Norwalk, Ohio, according to his Facebook profile.

According to his LinkedIn profile, Berry has worked on the grounds crew of an Ohio golf course and was a server at a restaurant while in college. Berry was a member of the golf team at Ohio Wesleyan, according to a now-deleted profile on the school’s website.

Berry was also involved in Greek life at the college and was given an award for being a “perfect role model,” and for leading the “fight to dismantle fraternity stereotypes,” a Zoom video posted by Ohio Wesleyan shows.

Ohio Wesleyan told The New York Times in a statement, “Ohio Wesleyan is saddened to learn of this situation with one of our graduates. The case does not involve the university, and the incidents depicted do not reflect Ohio Wesleyan’s values.”

4. Berry’s Bail Was Set at $1,500 After He Was Charged With 3 Misdemeanor Counts of Battery

Berry was charged with three misdemeanor counts of battery. According to police, the FBI declined to investigate the case for potential felony federal charges. He was booked into the Miami-Dade County jail and his bail was set at $1,500, according to online court records. He is no longer listed in the jail’s inmate database.

Berry could face up to a year in jail, along with fines and probation, if convicted of the first-degree misdemeanor battery charges, according to Florida state law.

5. The Incident Involving Berry Is the Latest in a String of Passengers Accused of Behaving in Unruly Ways & Assaulting Crew Members on Flights

The incident involving Berry is the latest in a string of passenger disruptions on flights. Both the Federal Aviation Administration and the flight attendants’ union have issued statements in recent months calling attention to the issue, which has become more prevalent as travel increases amid the lessening of COVID-19 restrictions and the uptick in coronavirus vaccinations.

While police say Berry is not expected to face federal criminal charges, the FAA could issue a large fine as a result of his conduct and he could be banned from flying.

The FAA said in May 2021, “The U.S. Department of Transportation’s Federal Aviation Administration (FAA) has proposed civil penalties ranging from $9,000 to $15,000 against five airline passengers for allegedly interfering with and, in two cases, assaulting flight attendants who instructed them to obey cabin crew instructions and various federal regulations.”

After Berry’s arrest, the FAA told The New York Times it would be investigating and added that, “cabin crews are responsible for deciding how to respond to unruly-passenger incidents,” and declined to comment on the individual incident.

Loading more stories
wpDiscuz
0
0
Would love your thoughts, please comment.x
()
x
| Reply
Maxwell Berry is an Ohio man who was duct-taped by crew members on a Frontier Airlines plane after he was accused of assaulting and groping three flight attendants.