Drone videos from the sky show the breadth of the tornado damage in Mayfield, Kentucky. You can watch multiple drone videos throughout this article. They were recorded on December 11 and December 12, 2021, the two days after the massive tornado demolished large sections of this small town of about 10,000 people.

The historic courthouse was severely damaged. The Police Department too. The Fire Department and multiple businesses suffered devastation. The tornado destroyed swaths of family homes. It heavily damaged churches. And it collapsed the roof at a candle factory, resulting in at least dozens of deaths and 70 people missing as search and rescue operations continued.

The governor has estimated that the death toll could exceed 100 people throughout Kentucky.

It was Mayfield where ground zero for tornado damage occurred, but it was not the only community to suffer terrible losses. About an hour down the road, the small town of Dawson Springs also suffered great devastation, including multiple deaths and obliterated apartment complexes. One man and his wife erected an American flag outside the demolished restaurant that had been in their family for 75 years; he said it represented freedom, and if he can rebuild the restaurant starting next week, he would. Such was the resilient nature of the people of Mayfield. The man pointed across the street to a pile of shredded wood and other building materials and said it used to be the steak restaurant across the street.

Here are the drone videos.

“Kentucky is united today,” he said. “…This is not a one day thing.”

The videos were provided to Heavy by James Piwowarczyk, who recorded them in Mayfield. 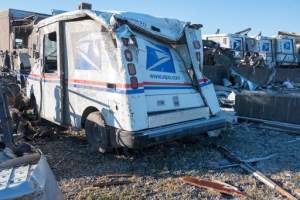 Photos also captured other stark scenes throughout Mayfield. There was severe damage at the post office, for example, where postal trucks were tipped over and destroyed.

The National Guard was posted at the road leading to the candle factory, where rescue operations remained underway.

At the press conference, Beshear said he’d just come from the factory. 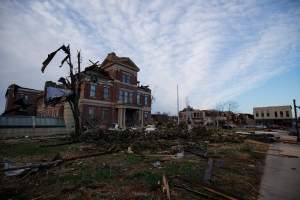 Tangled powerlines and snapped trees created a war zone like scene, along with metal that the powerful winds wrapped around tree trucks. Roofs were blown off homes, and homes were blown off foundations. In some cases, cars were turned over or their windows were blown out. Everyone you looked, there was damage. Power remained out, and a curfew was instituted. 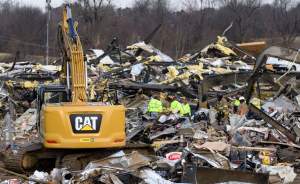 GettyEmergency workers search what is left of the Mayfield Consumer Products Candle Factory after it was destroyed by a tornado in Mayfield, Kentucky, on December 11, 2021.

“This is probably the toughest day of my life,” Graves County Executive Judge Jesse Perry said during the press conference. “We need your prayers, we need your help.”