A Mayfield candle factory in Kentucky was destroyed by the massive, historic tornado that cut through multiple states, trapping people under the rubble. The name of the business is the Mayfield Consumer Products.

CNN described Mayfield, a town of just over 10,000 people, as “ground zero” for the massive multi-state twister — meaning it’s the hardest hit area of Kentucky. 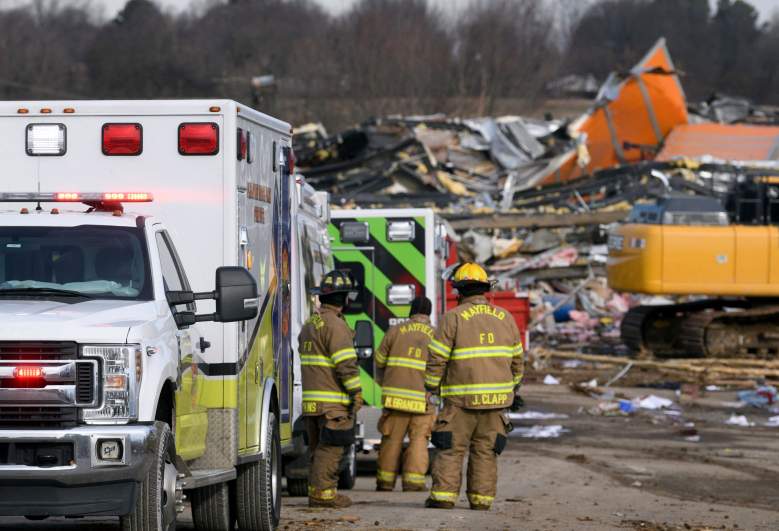 One employee of the candle company, Kyanna Parsons-Perez, livestreamed a Facebook video while trapped in the debris of the candle factory. You can watch her video below, but be aware that some viewers could find it disturbing.

“We going to be fine,” she says, explaining that her birthday was just 10 hours away and asking other people to sing happy birthday to her.

On December 11, Kentucky Governor Andy Beshear said the death toll in the state was more than 70; it could exceed 100, Weather.com reported.

“I’m now certain that number is north of 70. It may in fact end up exceeding 100 before the day is done,” Beshear said, according to Weather.com. “The damage is even worse now that we have first light.”

Among the dead are dozens of people in the candle factory in Mayfield, a town that suffered massive destruction. More than 110 people were inside the candle company when the tornado struck, according to CNN. People were trapped under rubble for hours, CNN reported.

“The level of devastation is unlike anything I’ve ever seen,” Beshear said in a noon press conference. “This will be, I believe, the deadliest tornado system to have ever run through Kentucky.”

Mayfield Has Been ‘Devastated,’ the Governor Says

“A roof collapse at a candle factory has resulted in mass casualties.”

Kentucky Governor, Andy Beshear says the city of Mayfield “has been devastated” by a tornado outbreak.

At the noon press conference, Beshear said he’d just come from the factory.

Beshear said after seeing what remains of the candle factory, he thinks the number of people who have been pulled from the rubble alive is “absolutely incredible.”

He described heavy machinery working at the scene, seeing cars from the parking lot on top of the rubble, and knowing huge metal drums of corrosive chemicals are inside the leveled building.

A violent tornado has raked through Mayfield, #KYwx tonight. Numerous folks were hurt & trapped or missing inside the Mayfield Consumer Products building. S&R Continues. Building completely destroyed with vehicles in the roof of it. Governor reporting 50 fatalities in town. pic.twitter.com/LuzwL4xPwC

He said tens of thousands of Kentuckians were without power. He said he was “absorbing the difficult news in real time,” and was in contact with Mayfield’s mayor and county judges. The courthouse was also damaged, its tattered flag flying in the wind.

Before midnight, he declared a state of emergency and activated the National Guard, including experts in search, extraction and debris clearing.

“State police have been working all night to save lives,” the governor said.

“Kentucky is united today,” he said. “…This is not a one day thing.”

Dozens of people are dead after tornadoes and severe storms hit the central U.S., with at least 70 estimated killed in Kentucky alone. In Mayfield, Ky., a candle factory was hit, leading to multiple fatalities. https://t.co/2FBYLDy7rR pic.twitter.com/jNeeaVM8eJ

Officials said in the news conference that the police station was destroyed in the storm. Police are beginning 12-hour shifts, and other departments have flooded into the community to help. There will be a curfew in place at 7 p.m. on December 11, 2021, in Mayfield.

“This is probably the toughest day of my life,” Graves County Executive Judge Jesse Perry said during the press conference. “We need your prayers, we need your help.”

The Candle Factory Was Hiring

People left Google reviews for the company. “Very great place to work! Nice people to work with and good management! My long shifts didn’t even feel like long shifts here because I stayed busy and it helped pass the time quicker! Awesome place to grow with the company!” one woman wrote.

Another woman wrote, “Worked for Mayfield Consumer Products for 2 1/2 years. It can be challenging, but very rewarding. There are some very nice people there. There is always room to grow in the company if you have good work ethic and are dependable. It is what you make it.”

Parsons-Perez Described the Moment ‘Everything Came Down’

Chilling video shows the cries of a candle worker trapped inside a factory after a deadly tornado collapsed their building. Kyana Parsons-Perez is speaking out on this horrifying experience amid severe tornado storms across the country. pic.twitter.com/zsr0rhc3RQ

Kyanna Parsons-Perez was trapped for two hours inside the candle company. “It was extremely scary,” she said to TODAY. “Everything happened so fast.” She said they were in an area to shelter from the storm. She said lights were flickering and then they felt a gust of wind. Her ears started popping. “And then … everything came down on us.” She heard screams.

She said it was a diverse company, and she heard employees screaming and praying in Spanish.

She said it was “absolutely the most terrifying thing I’ve ever experienced in my entire life,” adding, “I did not think I was going to make it.” Her back was against the wall when the tornado hit. She couldn’t feel her legs at first. It was a “complete mess,” she said. The man who rescued her said she had about five feet of debris on top of her, Parson-Perez said.

According to Yahoo, she streamed live on Facebook before being rescued, asking co-workers to sing happy birthday to her.

READ NEXT: Amazon Warehouse Damaged From the Tornado in Edwardsville, Illinois

Loading more stories
wpDiscuz
0
0
Would love your thoughts, please comment.x
()
x
| Reply
A Mayfield candle factory in Kentucky was destroyed by the massive, historic tornado that cut through multiple states, leaving people alive and dead under the rubble. The name of the business is the Mayfield Consumer Products.