Getty U.S. First Lady Melania Trump arrives at a roundtable on sickle cell disease in the State Dining Room of the White House.

The First Lady revealed how she was feeling via Twitter:

“Thank you for the love you are sending our way. I have mild symptoms but overall feeling good. I am looking forward to a speedy recovery.”

She also tweeted that she is quarantining and upcoming events are all postponed until further notice.

“As too many Americans have done this year, @potus & I are quarantining at home after testing positive for COVID-19. We are feeling good & I have postponed all upcoming engagements. Please be sure you are staying safe & we will all get through this together.”

The Trump’s physician, Dr. Sean Conley, released a memo saying he will be keeping an eye on them while they recover.

“The White House medical team and I will maintain a vigilant watch, and I appreciate the support provided by some of our country’s greatest medical professionals and institutions. Rest assured I expect the President to continue carrying out his duties without disruption while recovering, and I will keep you updated on any future developments.”

His memo, which is below, also confirmed that the rest of the Trump family tested negative for COVID-19.

The Mortality Risk For Women Aged 50 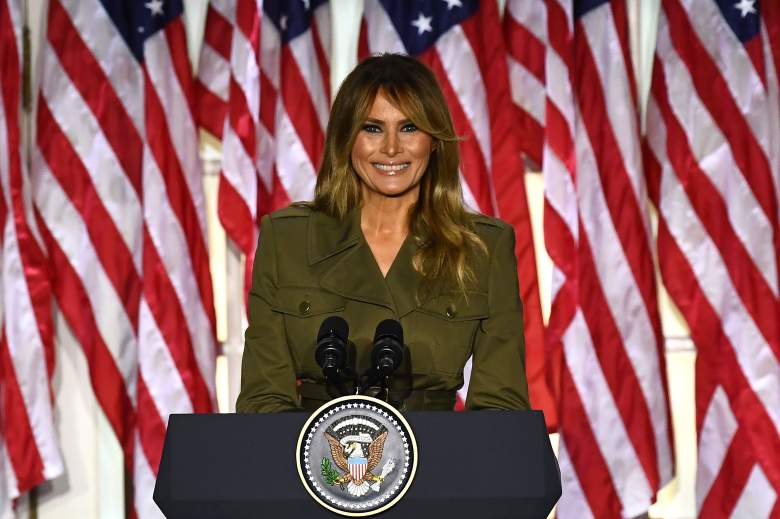 GettyMelania Trump at the RNC.

The CDC stated that the risk for experiencing severe illness from COVID-19 increased with age. It was also noted by an article from the  Nature Research Journal that “age is by far the strongest predictor of an infected person’s risk of dying.” According to Biography.com, Melania Trump is 50-years-old and the Nature Research article stated that out of all the “people in their fifties and early sixties, about five will die.”  In an infographic provided by the CDC, it was stated that people aged between 50 to 65 four times more likely to be hospitalized and the risk of death was 30 times higher when compared to 18 to 29-year-olds. In another dataset from the CDC, it said that from February 1, 2020 to September 30, 2020, there were 31,114 COVID-19-related deaths for people aged 50 to 64-years-old in the United States.

“COVID-19 is not just hazardous for elderly people, it is extremely dangerous for people in their mid-fifties, sixties and seventies,” Andrew Levin, an economist at Dartmouth College, told the Nature Research Journal.

The Lancet noted that mortality rates differ in men and women. According to their research, 77, 652 men died and 59,591 women from England and Wales, France, Germany, Italy, Netherlands, Portugal, Korea, and Spain died.  Their research found that “the overall male to female mortality sex ratio per 100,000 population was 1 to 4” and that for the male to female mortality rate it was “2 to 3 in the 50–59 year age group.”

Overall, men are at a higher risk of death than women are.

“Men face twice the risk of women,” Beatriz Pérez-Gómez, an epidemiologist at the Carlos III Institute of Health in Madrid, Spain, told the Nature Research Journal.