Jim Piwowarcayk for Heavy Thomas Glazewski is accused of putting I did that Biden stickers on gas pumps. These are other stickers.

Thomas Glazeski is a Pennsylvania man who police arrested after accusing him of putting “I did that” Joe Biden stickers on gas station pumps, being combative and running from and resisting officers. He is also accused of being “irate” toward an employee and running at her when she said he couldn’t put the stickers on the gas pumps.

Video of the arrest in the area of Lancaster, Pennsylvania, has gone viral. You can watch two videos later in this article. His full name is Thomas Richard Glazewski.

The “I did that” Biden stickers have popped up all over the country as a criticism of the president and rising gas prices. Heavy has contacted Glazewski through Facebook to seek comment.

A man named Aaron Phillips took the videos and posted them on his Facebook page on March 31, 2022. He wrote,

MUST WATCH! Happened today at Turkey Hill located on Columbia Ave in Lancaster, PA. 03/31/22 at about 12:50PM. This guy stuck stickers on a gas pump, got yelled at by a clerk for doing so and went crazy afterwards. Shout out to Manor Township Police Department, East Hempfield and Manheim township for handling the situation quickly and correctly! The guy admits he stuck the stickers there, he ‘chased after the camera’ and got to where he is now…The build up was just him yelling and flipping out at the clerk for him putting the sticker on the pump. Enjoy.

In the first video, you can see a commotion on the ground as a police officer arrests a man in a gas station parking lot. The man periodically yells things in the video, saying he needs a “lawyer for this S***.” In the beginning of the video, he points to a gas station pump and says, “I did this.”

A man wrote on the comment thread, “Biden stickers? What is the location address? I’ll swing by and add some on the pump.” Phillips told that man, “in fact was Biden stickers but dude got REAL upset when told not to put them on there.”

Police Accuse Glazewski of Causing a Disturbance After an Employee Told Him He Couldn’t Put the Anti-Biden Stickers on the Gas Pumps, Calling Him ‘Irate’ 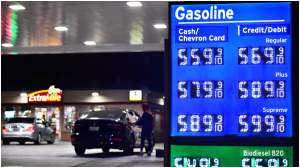 GettyWe could see the highest gas prices in history.

Heavy has contacted Manor Township police for additional details. According to the Lancaster police blotter, police say that Glazewski was causing a disturbance at the gas pumps on March 31.

They arrived and learned he had placed the I did that stickers on the pumps.

“A store employee approached Glazewski and told him he could not place stickers on the pumps. Glazewski reportedly got in the employee’s face and began screaming at her,” the police news release said. Police said in the release that an officer tried to deescalate the situation but accused Glazewski of instead running “towards a store employee in an aggressive manner.”

Here is the full release:

At approximately 1250hrs, Thursday, March 31, 2022, East Hempfield Township Police were dispatched to Turkey Hill – 1503 Columbia Ave. for a Disturbance in-progress involving an irate male at the gas pump area of the business. Upon arrival officers encountered the male, who began yelling at police. The officer attempted to verbally de-escalate the situation to no avail. The irate male then ran towards a store employee in an aggressive manner. The officer was able to intervene and subdue the male, who was identified as Thomas R. Glazewski, 53 of Lancaster. In speaking with witnesses at the scene, police learned that Glazewski had reportedly placed ‘Joe Biden’ stickers on the gas pumps, and he made reference to the high price of gasoline. A store employee approached Glazewski and told him he could not place stickers on the pumps. Glazewski reportedly got in the employee’s face and began screaming at her. Glazewski was subsequently transported via EMS to a local hospital for treatment of self-inflicted injuries that he sustained while seated in the back of a police vehicle. East Hempfield Police were assisted in bringing the situation under control by officers from the Manor Township and Manheim Township Police Departments. On Monday, April 4, 2022 a criminal complaint was filed against Thomas R. Glazewski charging him with one count each of: Resisting Arrest (M2); Disorderly Conduct (M3); Criminal Mischief (Sum); and Harassment (Sum).

Loading more stories
wpDiscuz
0
0
Would love your thoughts, please comment.x
()
x
| Reply
Thomas Glazeski is a Pennsylvania man who police arrested after accusing him of putting "I did that" Joe Biden stickers on gas station pumps.