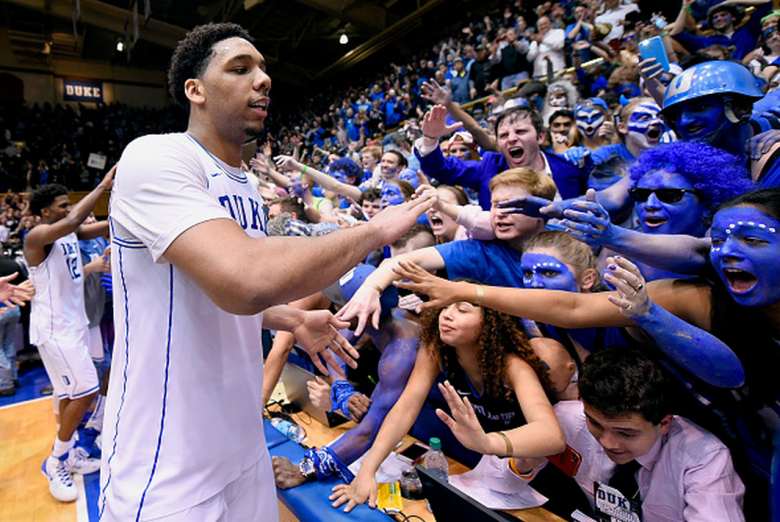 Jahlil Okafor #15 of the Duke Blue Devils celebrates with fans after a win against the North Carolina Tar Heels at Cameron Indoor Stadium on February 18, 2015 in Durham, North Carolina. Duke won 92-90 in overtime. (Getty)

Duke has been grabbing headlines all year. From adding a highly-touted recruit to the roster to the surprising loss to Miami on January 13. From coach Mike Krzyzewski – aka Coach K – making history by being the first NCAA Division I men’s basketball coach to reach 1,000 wins to him reaching another first, this one not-so-lustrous, and kicking a player off the team.

And like the Blue Devils program, that highly-touted recruit has remained in the spotlight – something he’s been doing since he was in middle school.

His name is Jahlil Okafor, and here’s what you need to know:

1. Okafor Is The First ESPN Top 100 Recruit To Go to Duke

Believe it or not, in his 34-year coaching career at Duke, this is Coach Krzyzewski’s first ESPN Top 100 recruit to commit and suit up in a Blue Devils uniform. The 6-foot-11 freshman phenom was highly-touted and sought after by many basketball programs, and for good reason.

He was a 4-year varsity letterman and had a career average of 14.8 points, 7.2 rebounds and 2.7 blocks per game, according to MaxPreps. Okafor helped his team to a state championship his senior year and was named Illinois Mr. Basketball, McDonald’s All-American Game Co-MVP and Jordan Brand Classic Co-MVP.

On November 15, 2013, Okafor committed to Duke as part of a package deal with Tyus Jones. With the Blue Devils, Okafor’s shooting 66 percent from the field and averaging 17.7 points, 9.0 rebounds and 1.4 blocks per game. 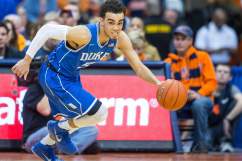 How to Watch Duke vs. Robert Morris Live Stream Online

2. Okafor Was Recognized as The Preseason National Collegiate Player of the Year. 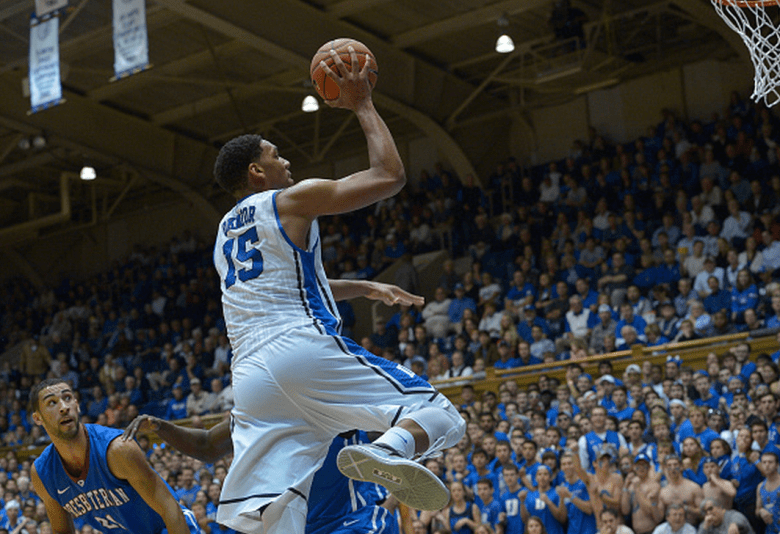 Jahlil Okafor #15 of the Duke Blue Devils against the Presbyterian Blue Hose during their game at Cameron Indoor Stadium on November 14, 2014 in Durham, North Carolina. (Getty)

Heading into his freshman season, Okafor wasn’t just touted for his high school accolades, but was also predicted as being the 2014-15 recipient of the National Collegiate Player of the Year award.

So far he’s been named as the ACC Player of the Year and if chosen as the National Collegiate Player of the Year, he would join players such as Larry Bird, Michael Jordan, Tim Duncan, Kevin Durant, Blake Griffin, Anthony Davis and last year’s winner Doug McDermott.

Unlike most recruits, Okafor didn’t have to wait until his junior and senior years to get noticed by college coaches. In fact, he didn’t even have to grace the hardwood of a high school court. Instead, Okafor received his first scholarship offer when he was just in eighth grade.

Standing 6-foot-7, he was given an oral offer by DePaul University’s interim coach Tracy Webster following their loss to Syracuse, 59-57, at Allstate Arena on January 30, 2010.

This offer, which was a direct NCAA recruiting rules violation, was confirmed in February by the Blue Demons’ athletic director Jean Lenti Ponsetto in a statement to ESPNChicago.com:

This is a young guy we’ve been talking with for a long time, and who has been to games and we have a relationship with because his uncle works for the Rosemont Police Department…I think it’s a prospect who has grown up around DePaul basketball. I think he’s probably a fan and someone who has been a fan for some time, since we have played in Rosemont for the last 30 years.

His freshman year, Okafor received an offer from then-Illinois head coach Bruce Weber during a one-day camp at University of Illinois at Urbana-Champaign. And by his junior year, Okafor had offers from Kentucky, Louisville, Ohio State, Michigan State, Duke, North Carolina, Florida and Arizona.

Not only did Okafor’s school play draw attention, but also his AAU team, Mac Irvin Fire, which has seen players such as Jabari Parker, Cliff Alexander, Wayne Blackshear and Kiefer Sykes come through the system.

4. Okafor Watched His Mom Die Before He Was 10-years-old 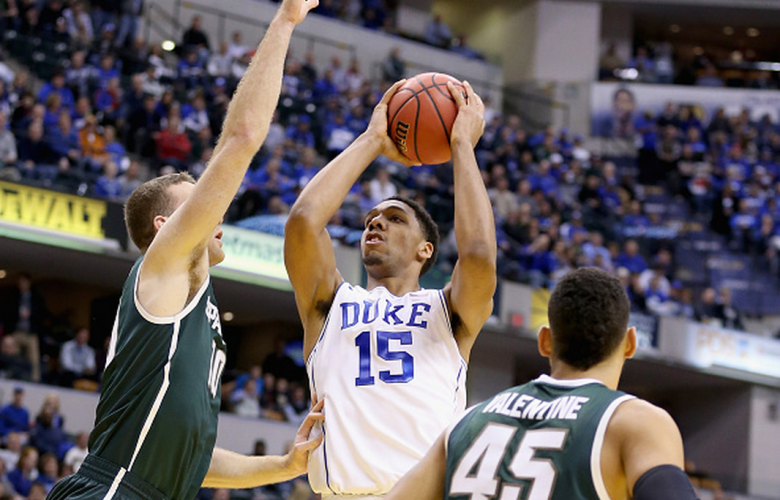 Jahlil Okafor #15 of the Duke Blue Devils shoots the ball during the game against the Michigan State Spartans in the State Farm Champions Classic at Bankers Life Fieldhouse on November 18, 2014 in Indianapolis, Indiana. (Getty)

Okafor’s parents, Dacresha “Dee” Benton and Chuckwudi “Chucky” Okafor, met when his father played college hoops in Dee’s Oklahoma hometown. They had two children, Jahlil and his sister Jalen. And they split up when Okafor was 7-years-old. While he and his sister stayed with their mom in Oklahoma, his father moved back home to Chicago.

Okafor told ESPN he has a lot of memories of his mother, but one is not so fond. He wasn’t quite 10-years-old when his mom was dealing with bronchitis. Okafor said she started breathing funny and it turns out one of her lungs had collapsed. He called 911 and watched medics perform CPR on her, but they couldn’t save her and she died. Okafor said:

I think about it just about every day. Any time I get to a quiet spot, in my room by myself, it drops in my mind.

Coping with the loss of their mother, Okafor and Jalen moved to Chicago to live with their dad and gain support from their aunt, Dr. Chinyere Okafor-Conley.

While basketball was an outlet for Okafor, the lesson learned was something Okafor-Conley said impacted his play in a deeper way.

He gets it. With his mom’s passing, he knows that you’re not promised tomorrow and that you’re not guaranteed anything. We’ve had this discussion over and over again. Life can change in a matter of a minute, so enjoy it. That’s what he’s doing. He’s enjoying it. 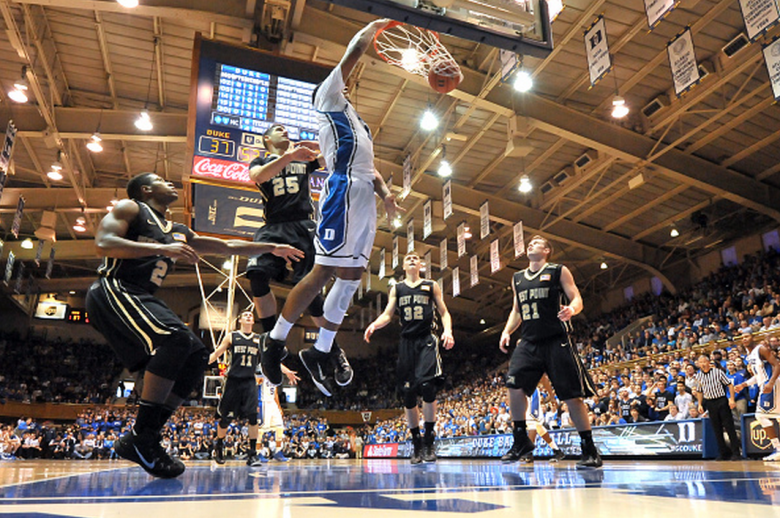 Jahlil Okafor #15 of the Duke Blue Devils dunks against the Army Black Knights during their game at Cameron Indoor Stadium on November 30, 2014 in Durham, North Carolina. Duke defeated Army 93-73. (Getty)

Okafor was the No. 1 recruit coming out of high school and he is projected as the No. 1 overall NBA Draft pick this year.

Whether he opts for the draft or not, one thing is for certain, Okafor and the Blue Devils are focused on one thing right now – a national championship. 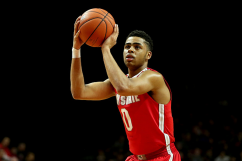