A video revealed the moment Dillon Danis tried to tap out while he was being choked by a bouncer at a New Jersey bar. Conor McGregor’s jiu-jitsu training partner was later arrested on a disorderly conduct charge. The incident occurred on Sunday, September 29, 2021, in Seaside Heights on the Jersey Shore.

The 28-year-old Danis is currently signed to the Bellator MMA roster. He is 2-0 in his Bellator career. Danis is a jiu-jitsu black belt and has competed in grappling matches. Danis was in the spotlight during a brawl between McGregor’s team and Khabib Nurmagamedov’s team after McGregor was submitted by the former UFC champion in 2018. And Danis, who trains alongside McGregor at SBG Ireland, has also tried to line up a boxing match with Jake Paul as part of a lengthy social media feud.

After word of Danis’ arrest emerged online, the fighter and coach tweeted simply, “you need people like me.” He has not posted anything else on Twitter or Instagram and has not commented publicly about his arrest. Heavy reached out to the Seaside Heights Police Department for more information. 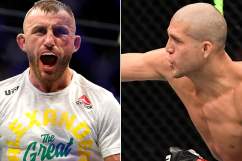 Video of the incident was posted on YouTube and Twitter by a witness named Melissa Waite. The video shows Danis on the ground in the grasp of a bouncer, who has his legs wrapped around his body and his arms around his neck in a rear-naked choke, while a crowd of people walks around.

Danis gives a thumps up a few times to the bystanders while the bouncer holds him down. But after the bouncer adjusts, Danis appears to try to tap out. After about a minute, police officers remove Danis from the bouncer’s grasp and handcuff him, lifting him to his feet. Another video shows Danis being removed from the area by police, while a woman watching says, “Oh no, baby.”

MMA Fighting reports the arrest happened at Beachcomer Bar and Grill. Danis was kicked out of the bar after “creating a disturbance,” MMA Fighting reports. He was charged with disorderly conduct an is scheduled to appear in court in October. He faces up to six months in jail, along with possible fines and probation.

The bouncer seen in the video told Grappling Insider that Danis came to the bar about 12:30 a.m. on Sunday with a wedding party, but he didn’t have an ID with him.

“At the time I had no idea who he was and none of the bouncers did either so we denied him entry based on lack of proof of age,” the bouncer said. “Once we told him no he began to become defensive asking us ‘Do you know who I am? Because I’d you don’t your going to be fired if you don’t let me in/’ As a bouncer at the Jersey Shore we hear this multiple times a night. We continue to tell him we can’t let him in unless he has an ID and telling him he can go get it or anything else but without a valid ID we won’t let him in.” The bouncer said at that point Danis was told to leave.

Danis Has Not Fought Since 2019

Danis has not competed in MMA since 2019 and had to pull out of a fight in January 2020 in Bellator because he suffered an injury while training with McGregor. He last competed in grappling in 2017. Danis, a New Jersey native, defeated Kyle Walker by toe hold at Bellator 198 in 2018 and Max Humphrey by armbar at Bellator 222 in 2019. His fight against Kegan Gennrich was canceled in 2020.

Several UFC fighters and others in the MMA community reacted to Danis’ arrest and the video of him being choked on Twitter after the video emerged online. Danis hasn’t commented on the video.

Eryk Anders tweeted, “He tried to tap in a street fight. 🤣 😭” Al Iaquinta added, “Broooo 🤣🤣🤣… Does anyone know how to contact the bouncer that choked out Dannis in seaside? Neeed to have him on @CallMeAlShow tomorrow night. 🙏🏼”

Lol how funny is this? Cop has Danis back and applying RNC. It’s no wonder we never see him in the cage 😂😂😂😂 https://t.co/JdnTrQq1V2

Ben Askren tweeted, “Lol how funny is this? Cop has Danis back and applying RNC. It’s no wonder we never see him in the cage.” 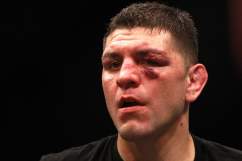 Loading more stories
wpDiscuz
0
0
Would love your thoughts, please comment.x
()
x
| Reply
A video revealed the moment Dillon Danis tried to tap out while he was being choked by a bouncer at a New Jersey bar. Conor McGregor's jiu-jitsu coach was later arrested.