The iPhone 5S is rumored to be Apple’s pride and joy this fall as the corporation gears up to announce its newest set of smartphones. Here are the top 10 facts you need to know.

1. Pop The ‘Champagne’ as Apple Introduces a Brand-New Color

The “champagne”-colored cover is one of the top selling points for the new iPhone. (9to5Mac)

Avoiding the traditional color scheme of black and white, Apple will sell the iPhone 5S with a champagne case. The luxurious look has serious commercial appeal and could be the infusion of color that Apple needs for this sputtering product line. Many sources noted that the gold hue was easy to anodize, which would have helped with production. This is one of the few speculations that has actually turned out to be true, which is a good thing. 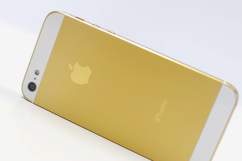 2. China’s Lust for Luster Could Explain the Golden Skin

Gold is an important symbol in China, where Apple’s smartphones are quite popular. (AllThingsD)

The Brattleboro Reformer notes that CEO Tim Cook conferred with China Mobile head honcho Xi Guoha a few months ago. The details of this discussion were kept under wraps but could be an explanation as to why the tech titan elected to try a golden coating. The Mercury News elaborated that gold stands for prosperity and influence in the country. In case the phone underwhelms upon release, this extra additive would support soaring sales in that country. The L.A. Times divulged that Apple had arranged a deal with China Mobile to help them in this market. This is still unconfirmed, but it might be a precaution by Cook to hedge his bets.

Although it’s been dubbed the “iPhone 5S,” the name could change into “iPhone 6.” The company began leaking enough information about the phone to generate the usual hype they enjoy. However, the name hasn’t been acknowledged. Technically, it could be the iPhone 6 since it’s the sixth gadget within the patented phone category. The assumptions that the newest installment could a 5S are based on the size, shape and probable features.

A possible fingerprint sensor is the most anticipated new feature (Modmyi)

Of course, the new phone has a selection of features Apple enthusiasts eagerly anticipate. The rumor mill has churned out this particular bit of information inquiring if a fingerprint sensor could be enveloped in the home button. Last year, Apple bought Authentec. Neither side commented on the purpose of this acquisition, leading inquisitive minds to think Apple was creating a new security program. This is another element that has yet to be confirmed or denied. Cult of Mac cites noted KGI Securities analyst Ming Chi-Kuo, who claimed the 5S will have a biometric sensor embedded in a sapphire crystal home button. If true, the iPhone 5S gained just a little more sheen to its flashy new look.

5. Other Features Could Include an A7 Processor & Dual-LED Camera

The pictured schematics imply that the fingerprint sensor rumors could be true, with an opening at the bottom for a new installation based on the images Nowhereelse.fr obtained. Also, BGR asserts that Apple will incorporate an A7 processor as well as a dual-LED-flash camera. New distinguished factors is what this phone needs to impress Wall Street, shareholders and the eager audience awaiting these new toys.

Ming-Chi Kuo should be nicknamed Apple’s Oracle. His stellar track record when it comes to Apple predictions has caused him to become the best source for information about this firm. Kuo assumes that the newest iPhone will have 128 GB of memory when it arrives. This memory capacity is exactly the same as the iPad 4. The analyst is rarely wrong and had a few other interesting ideas about what this new phone could contain.

This is a mock-up of the iPhone 5s (Apple Insider)

Surprisingly, Kuo predicts that the company’s supply chain will produce a smaller volume of iPhone 5S phones compared with its “cheaper” cousin, the 5C. He places the blame on difficulties in creating the top-of-the-line piece of Apple gear. While 5.2 million is the estimated 5S output for September, 8.4 million is the outlook for the iPhone 5C. For the crucial holiday season, Ming Chi believes shipments for the 5S will increase exponentially.

The Wall Street Journal reported that Tim Cook and his crew told suppliers to prepare shipments of two phones this fall. The video above was leaked last week by rising star blogger Sonny Dickson, comparing both of these gadgets. Both phones have their special features, but it could illustrate why suppliers may have struggled with production. Both iPhones on the market at the same time would be financially smart as long as the difference is emphasized. Market control is Apple’s goal, and having both iPhones on shelves could crush the competition.

9. The Rumored Release Date is September 20

Since Steve Jobs began introducing his firm’s newest arsenal of Apple gear, the trend has been sending showcased pieces of tech to stores pretty quickly. September 20 could be the official release date of the luxury phone. With production probably picking up in the next few weeks, we should see the 5S sooner than we think. Before we know it, commercials like the one above will be storming across our TV screens as the holidays approach.

These rumors are tantalizing, but September 10 will reveal how true each of them is. Tim Cook and his staff are under a lot of pressure to deliver some compelling new tech. The fate of the final iOS 7 Beta should be explained as well, since the innovative OS is associated with the final release of these phones.

Let us know in the comments below if you’re leaning toward buying the 5s or 5c!

Save The Date? New iPhone (6?) May Be Unveiled September 10