Another “Jersey Shore” star will soon walk down the aisle.

Ronnie Ortiz-Magro is engaged to his girlfriend Saffire Matos, whom he has been linked with since last fall. The controversial MTV star shared the happy news in a post to his Instagram page. Ortiz-Magro posted a photo of a Santa Monica, California beach decorated with oversized white letters that spelled out “MARRY ME.” A blanket with roses scattered on it could be seen in the distance.

The reality star’s future bride could be seen from behind as he held her hand, which was adorned with a huge diamond ring.

“I love you,” Ortiz-Magro captioned the post. “Thank you for sticking by my side through thick and thin! Til death do us part! #SheSaidYes.”

Ortiz-Magro hired the Event Factory for the boho style romantic proposal set up, as well as a private chef who provided sushi and non-alcoholic champagne, an insider told E! News.  He also hired a videographer to capture the surprise proposal.

Ortiz-Magro’s Instagram comments are disabled, so fans can’t see if any of his “Jersey Shore” castmates have offered him congratulations.

Ortiz-Magro has one daughter with his ex, Jen Harley. An insider told People that the reality star’s 3-year-old daughter, Ariana, was also on hand for the beachside picnic proposal.

“Ronnie has been taken this time to work on himself and his daughter,” the source told the outlet. “For him, he felt like this right time. They’re both really happy for this next chapter. His health and happiness are what is most important.”

In addition to his daughter, Ortiz-Magro celebrated his engagement with his mom and stepfather. The E! source added that he has been “working hard on his mental health” and recently completed a program at a health and wellness center and that his fiancée” has been really supportive of his recovery and is looking forward to the next chapter of their journey.”

The engagement came two months after Ortiz-Magro was arrested for domestic violence, and released from jail after posting $100,000 bail, per TMZ. The MTV veteran is currently logging a 36- month probation as part of a plea deal stemming from prior domestic violence charges when he was with Harley.

Shortly after Ortiz-Magros’ latest arrest, Matos issued a statement on social media to confirm that they were “fine” and to blast the misleading information that was reported about his arrest. She also asked for privacy and for people to “please leave Ron and I alone.” 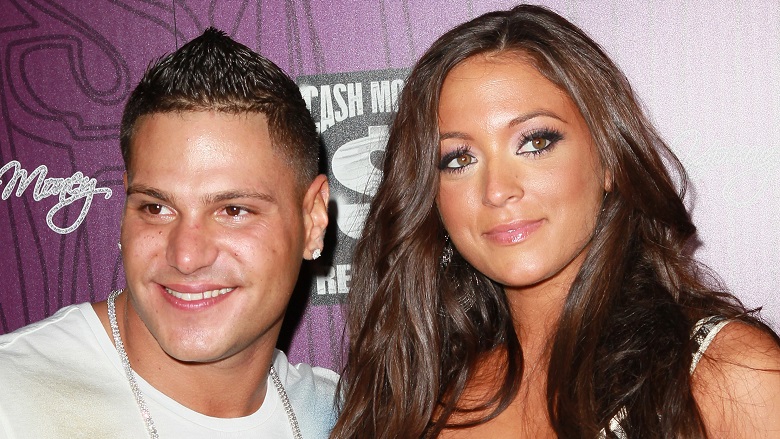 As Ortiz-Magro celebrates his happy news, his ex-girlfriend Sammi “Sweetheart” Giancola appears to have ended her relationship with her fiance Christian Biscardi. At the recent grand opening of her Sweetheart Coast store on the Ocean City, New Jersey boardwalk, fans noticed that Giancola was not wearing her engagement ring two years after accepting a proposal from Biscardi, an insider told Us Weekly.

A third source told E! News that Giancola “didn’t mention her fiancé or wedding,” and that her sister and her mom both attended her grand opening event “but Christian wasn’t there.”

Giancola and Biscardi have also stopped following each other on Instagram and have removed most pictures of each other from their social media pages.