The fixed-wing aircraft was fully engulfed in flames before firefighters could get to the plane. The victims have not yet been identified.

1. All on Board Have Been Killed

A photo from close to the scene. Image via Twitter.

Ten people are reported to be dead, nine passengers as while as one pilot. The crash killed all of those on board.

2. It Was a Light Aircraft Crash

The plane that crashed was a light aircraft, a de Havilland Otter Air Taxi. The aircraft was designed to seat 11 people. It’s believed the plane was coming in to land at Soldotna Airport, about 150 miles south east of Anchorage.

3. The Crash Occurred on Sunday Morning

Plane crash at the Soldotna Airport in Alaska, killing all 10 people on board. http://t.co/qpk8VVpu6z pic.twitter.com/douMxTFXlS

The crash is believed to have happened at around 11:20 a.m. on Sunday morning. Early reports had indicated that the crash happened just after take-off.

4. An NTSB Investigator On His Way to San Francisco Has Been Held Back 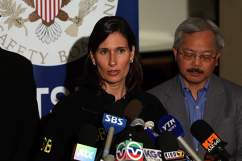 5. The Cause of the Crash is Still Undetermined

The NTSB in Alaska will launch “major go-team” to investigate the cause.

Read More
Breaking News, Deaths, Plane Crash, Tragedy
Ten people are reported to be dead in a small airplane crash in Soldotna Airport in Alaska. All of those on board have died.