The man who filmed the arrest of Freddie Gray was arrested Thursday night in Baltimore, according to reports on Twitter and Counter Current News.

Moore was later released without charges, while two others who were in a car with him remained in custody.

@marymad yup. our Ferguson copwatchers we're driving with him. he's free. our folks however are not.

Gray died April 19 after his arrest in West Baltimore on April 12. He suffered an injury to his spine and voice box at some point during the arrest, but details of how he died haven’t been released yet. The investigation into his death is in the hands of the state’s attorney’s office and six police officers have been put on paid leave pending the outcome. His arrest sparked outrage in Baltimore and led to both peaceful and violent protests, as well as a state of emergency and curfew.

1. Moore Said He Feared Being Targeted By the Police

Moore, who filmed the above video, had told people he was afraid of police retaliation. He and others compared his situation to that of Ramsey Orta, the man who filmed the death of Eric Garner in New York City and was later arrested.

2. He Was in the Car With 2 Members of ‘Cop Watch’ From Ferguson Who Were Also Arrested

According to Counter Current News, Moore was in a car with two members of a “Cop Watch” group that had traveled to Baltimore to join the protests. They have been identified as Chad Jackson and Tony White and remained in custody as of early Friday morning in Baltimore.

Moore spoke to Carlos Miller of the website Photography Is Not a Crime after he was released:

3. Police Released a Photo of Moore Saying They Wanted Help Identifying Him as a Potential Witness

Police released this image of Kevin Moore to the media. (Baltimore Police)

Moore spoke out after police released a surveillance photo of him and asked for the public’s help identifying him, saying he they wanted to question him about what he saw when Gray died. Moore told the Sun he had already talked to police before the release of the photo, and that they knew who he was and only released the photo to intimidate him.

“What is so important that you have to plaster my picture over the Internet? I’ve already spoken,” Moore told the Sun. “How do you not know that picture is me?” 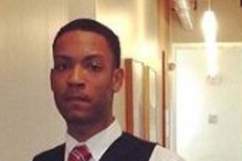 Moore’s video, the second one taken by a witness to be released, shows Gray being dragged to a police transport van by officers, with his legs hanging limp. He appears to stand on one leg before entering the van.

“They had him folded up like he was a crab or a piece of origami. He was all bent up,” Moore told the Baltimore Sun.

Did Freddie Gray Have a Spinal Injury Before His Arrest? No.

5. He Said He Was Friends With Gray & Lives Near Where He Was Arrested

Moore, 30, told the Sun that he was friends with Gray and also lived in the Gilmor Homes. He said he rushed out to see what was happening.

“Once I got around to see where Freddie was, I instantly started recording,” Moore said.

Loading more stories
wpDiscuz
3
0
Would love your thoughts, please comment.x
()
x
| Reply
Kevin Moore, the man who filmed the arrest of Freddie Gray, was arrested Thursday night in Baltimore, according to reports on social media.