Five people were shot late Monday night in Minneapolis, where Black Lives Matter and other groups have been gathering for more than a week demanding action in the shooting death of Jamar Clark.

Two suspects were arrested Tuesday afternoon, Minneapolis police said on Twitter. A 23-year-old white male, Allen “Lance” Scarsella, was arrested in Bloomington. Two other suspects, Daniel Macey, 26, and Nathan Gustavsson, 21, later turned themselves in to police. All three men are being held without bail on suspicion of assault.

A 32-year-old Hispanic male, who goes by “Saiga Marine” in online postings, was also in arrested Tuesday, but was later released when police determined he was not at the scene Monday night.

Activists at the scene say the gunmen were “white supremacists.”

The scene is near the Minneapolis Police Department’s 4th Precinct in North Minneapolis. Police say the victims suffered serious injuries, but are expected to survive.

The shooting was reported at about 10:40 p.m. Officers said they heard the sound of multiple shots in the area of 1400 Morgan Avenue North, a block away from the 4th Precinct. Dispatchers then received multiple 911 calls reporting five people had been shot in that area, police said.

1. The Victims Were Taken to Local Hospitals & At Least 1 Was in Surgery

Two victims were taken to Hennepin County Medical Center by ambulance and three others were driven by private vehicles to the North Memorial Medical Center, police said.

Black Lives Matter says one of the victims was shot in the stomach and was in surgery early Tuesday morning.

Wesley Martin, one of the victims of last night's shooting, returned to the scene with a cane and a pronounced limp. pic.twitter.com/YfrA8duftD

Martin, who knew Clark, says he was shot once in the leg after he and others chased the gunmen away. Bullet tore through his right knee.

Another one of the victims of last night's shooting outside the precinct house was Jamar Clark's cousin, a family friend said.

The demonstrators have criticized the police response to Monday night’s shooting on Twitter, saying officers staged outside of the scene for several minutes before coming to the aid of the gunshot victims. They also say officers maced protesters who were filming them.

Police radio audio recorded from a scanner can be heard here.

Watch a live stream from the scene below:

Police said in a statement, “Dozens of officers responded almost immediately attending to victims and secured the scene. Additional resources were called in and are actively investigating the shootings, interviewing a multitude of witnesses. The Police Department is working to identify suspects. The police are asking that anyone with information to please come forward. … The Minneapolis Police Department has additional uniformed officers in the area to ensure the safety of all persons.”

Activists who witnessed the shooting are saying that the suspects were white males, possibly wearing ski masks, who opened fire on a crowd of peaceful protesters.

Dana Jaehnert of St Paul says she witnessed at least 3 white "supremacists" @ the shooting, some in masks. @MPRnews pic.twitter.com/oHsoIJjLW7

“A group of white supremacists showed up at the protest, as they have done most nights,” Miski Noor, a spokesperson for Black Lives Matter, told the Minneapolis Star-Tribune.

Noor told the newspaper the protesters tried to get the group away from the area, and the men then “opened fire” on about six demonstrators. The shooting occurred in an alley about a block from the 4th Police Precinct, Noor said.

There has not been any confirmation that the suspects are white supremacists, but according to KSTP-TV, police sources have confirmed the suspects are believed to be white males wearing bullet proof vests.

“I am obviously appalled that white supremacists would open fire on nonviolent, peaceful protesters,” Nekima Levy-Pounds, president of the Minneapolis chapter of the NAACP, told the Star-Tribune.

Just to give you an idea of the protest looked like before the white supremacist shot it up #4thPrecinctShutDown https://t.co/WBRJKUK8ti 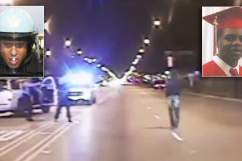 According to City Pages, two men wearing camouflage with masks over their faces came to the protests last Friday night. Protesters said they felt threatened by the armed men.

A video posted by the two men (which can be watched above) was found online by Black Lives Matter Minneapolis.

Police said last week they were aware of the threat to protesters.

“The Minneapolis Police Department has received information that a group may attempt to cause a disturbance this evening in front of the Police Department’s 4th Precinct,” police spokesman Scott Seroka said in a statement. “We are asking gathered demonstrators to be vigilant and report any actions that may seem out of the ordinary. If anyone notices something suspicious, please contact a nearby officer or call 9-1-1. A physical description, clothing description, and/or vehicle description is helpful. Also, please report any ‘out of the ordinary’ actions you have observed.”

After the shooting, the brother of Jamar Clark, Eddie Sutton, issued a statement to the media:

Thank you to the community for the incredible support you have shown for our family in this difficult time. We appreciate Black Lives Matter for holding it down and keeping the protests peaceful. But in light of tonight’s shootings, the family feels out of imminent concern for the safety of the occupiers, we must get the occupation of the 4th precinct ended and onto the next step.

Activists with the Black Lives Matter movement have said on Twitter that they will not let the shooting scare them away from protesting the against the police.

The revolution will not be derailed. We stay hungry for justice. #4thPrecinctShutDown #Justice4Jamar #BlackLivesMatter

Jamar Clark, who was unarmed, was shot by in the head by a police officer on Sunday, November 15. He died the next night.

Police told the Minneapolis Star-Tribune Clark, 24, was suspected in an assault, and was interfering with emergency workers trying to provide aid to a victim. He was shot during a physical struggle, police said. The police union says Clark was shot after he tried to take a gun from one of the officers, KARE reports.

But witnesses say Clark was not resisting arrest and was laying on the ground when he was shot, according to the NAACP. Witnesses have also claimed that Clark was in handcuffs before he was shot. Police deny those claims.

Teto Wilson, a witness, was quoted by the NAACP as saying, Clark “was just laying there. He was not resisting arrest. Two officers were surrounding the victim on the ground, an officer maneuvered his body around to shield Jamar’s body, and I heard the shot go off.”

A family member says Clark was shot in the head “execution style,” the Star-Tribune reports.

Protesters have demanded the release of videos that show parts of the shooting, but authorities say they will not release the video until the investigation is concluded. Officials say the investigation could take months to be completed. They say the video is not conclusive, and does not show the whole incident.

The demonstrators, made up mostly of members of Black Lives Matter Minneapolis and the local NAACP, along with other community groups, have said they are willing to stay at the precinct as long as it takes to get justice and have their demands met.

5. Two Officers Are Being Investigated in the Clark Shooting

The shooting is being investigated by the Bureau of Criminal Apprehension, which is part of the state Department of Public Safety.

“I want to acknowledge that this is a very difficult situation for everyone involved: For members of our community, members of the Minneapolis Police Department and their families, and for the people that are standing here beside me,” Minneapolis Police Chief Janee Harteau said last week. “We need to know exactly what happened. We need to know the truth. Everyone involved needs that and deserves that.”

According to the Star Tribune, Ringgenberg, 30, and Schwarze, 28, have both been with the Minneapolis Police Department for 13 months.

According to federal court documents, Mark Ringgenberg was sued for excessive force and false arrest in 2012, while he was a San Diego police officer. He was sued by Fred Clark Jr., a Bergenfield, New Jersey, man who was arrested while he was in San Diego in 2010. The lawsuit was dropped by Clark, because it was becoming too expensive for him to fight, he told Heavy.com.

Read more about the lawsuit and the officers at the link below: