WARNING: The video below is graphic. Viewer discretion advised:

The video, which you can watch above, was recorded on a police vehicle’s dashboard camera and does not have audio. It begins with several minutes of the officer whose vehicle recorded the shooting driving to the scene. At about the five-minute mark of the video, the officer arrives at the scene. McDonald can be seen running down the street.

McDonald, who was armed with a knife and suspected in an armed robbery, was shot 16 times in about 30 seconds, from about 12 to 15 feet away. Van Dyke was the only officer at the scene to fire, and he did so just seconds after exiting his SUV along with his partner, who did not shoot McDonald. Several of the shots were fired while McDonald was on the ground. Van Dyke’s partner then approaches McDonald and kicks away the knife. No medical aid was provided to McDonald by the officers.

An autopsy report shows where McDonald was shot: 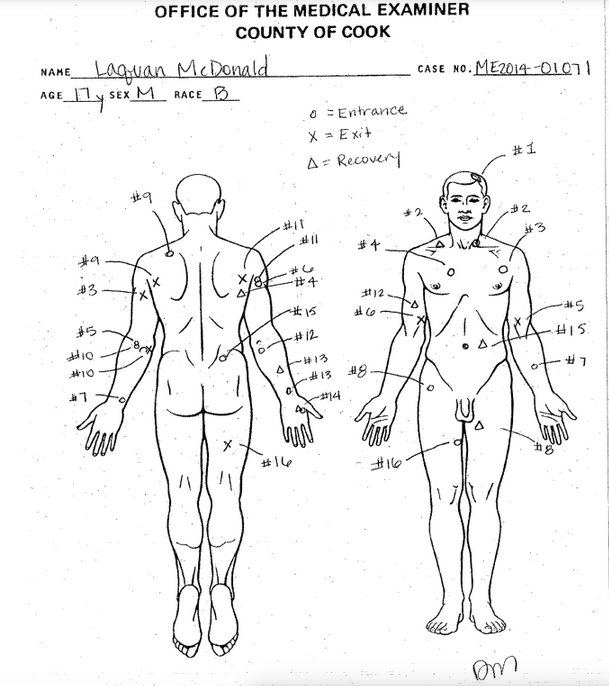 Van Dyke was arrested on Tuesday, more than a year after the shooting, and charged with first-degree murder.

Read more about Van Dyke at the link below:

You can read the charging documents in the murder case below:

The city initially fought the release of the video, claiming it would interfere with the state and federal investigations into the shooting, but decided not to appeal a judge’s decision that it must be made public. The Cook County State’s Attorney said the murder charge against Van Dyke was moved up because of the judge’s order to release the video. She said she wanted to wait until the completion of the federal investigation, but decided it would be best to announce the charge along with the video.

The video shows McDonald walking west in the middle of Pulaski Street with a knife in his right hand. Two officers jump out of a SUV with their guns drawn. McDonald can be seen continuing to walk west, with a lane of traffic separating him from the officers. One of the officers, later identified as Jason Van Dyke, begins shooting from about several feet away from McDonald. The teen is spun around by the first shots and the officer continues firing. McDonald falls to the ground and an officer walks up to him and kicks the knife out of his hand.

McDonald’s family settled a lawsuit with the city for $5 million in April.

According to the Chicago Tribune, officers began to follow McDonald after he was allegedly trying to break into vehicles at a trucking yard. The officers followed him for nearly a half-mile, through a Burger King parking lot and onto a busy street. The officers were waiting for backup units with Tasers and tried to corral McDonald to keep him away from passers-by, the Tribune reported.

The caller reporting the attempted break-ins at the trucking yard had told police McDonald was armed with a knife and had threatened him with it. He also punctured a tire of a police vehicle that was following him and struck the vehicle’s windshield.

The police union says Van Dyke was in fear for his life.

“The officers are responding to someone with a knife in a crazed condition who stabs out tires on a vehicle, on a squad car,” Fraternal Order of Police spokesman Pat Camden told the Chicago Tribune. “You obviously aren’t going to sit down and have a cup of coffee with him. He is a very serious threat to the officers, and he leaves them no choice at that point but to defend themselves.”

City officials and McDonald’s family have called for peaceful protests after the video’s release.

“We ask for calm in Chicago. No one understands the anger more than us but if you choose to speak out, we urge you to be peaceful. Don’t resort to violence in Laquan’s name. Let his legacy be better than that,” McDonald’s family said.