Frank Gaffney, founder and president of the Center for Security Policy, testifies during a hearing of the Senate Judiciary Committee in 2013. (Getty)

In his statement calling for a complete shutdown of Muslim immigration to the United States, Donald Trump cited a study by the controversial Center for Security Policy.

The center is a far-right think tank run by Frank Gaffney Jr., a radio host who worked in the Department of Defense in the Reagan administration.

Trump, the Republican frontrunner for president, said in his statement, “Without looking at the various polling data, it is obvious to anybody the hatred is beyond comprehension. Where this hatred comes from and why we will have to determine. Until we are able to determine and understand this problem and the dangerous threat it poses, our country cannot be the victims of horrendous attacks by people that believe only in Jihad, and have no sense of reason or respect for human life.”

Trump’s statement has been widely criticized by fellow presidential candidates and other politicians.

Here’s what you need to know about the Center for Security Policy and Frank Gaffney:

1. The Polling Data Cited by Trump Was Released in June

Donald Trump calls for an end to Muslim immigration, citing a flawed study by the Center for Security Policy. pic.twitter.com/6Iwb1F1NiP

Trump cites in his statement a poll from the Center for Security Policy.

He said the Center for Security Policy poll shows, “25% of those polled agreed that violence against Americans here in the United States is justified as a part of the global jihad” and 51% of those polled, “agreed that Muslims in America should have the choice of being governed according to Shariah.”

Trump defined Shariah by saying it “authorizes such atrocities as murder against non-believers who won’t convert, beheadings and more unthinkable acts that pose great harm to Americans, especially women.”

The Washington Post has called the poll “shoddy,” saying it was an online opt-in poll of 600 U.S. Muslims.

The poll was also criticized by Georgetown University’s Bridge Initiative, “this survey should not be taken seriously. It comes from an organization with a history of producing dubious claims and ‘studies’ about the threat of shariah, and was administered using an unreliable methodology. Its proponents seize upon its shoddy findings, exaggerating and misrepresenting them to American audiences, and falsely claim that the survey data represent the views of Muslims nationwide.”

2. Trump Has Been Invited by Gaffney to His National Security Action Summit

Trump has been invited by Gaffney to take part in his National Security Action Summit on December 14 in Las Vegas. Trump has not confirmed if he will participate, according to the event’s website.

“The conference will feature many of the most influential national security practitioners of our day addressing the current state of U.S. foreign and defense policy in an increasingly perilous world. Specifically, the event will cover four key topics of interest to both our nation and the state of Nevada: The Hollowing Out of The U.S. Military, America’s Electrical Power Grid and Threats to Critical Infrastructure, The Threat from Iran, Shariah and The Global Jihad Movement and Border Insecurity and Illegal Immigration.”

Trump did speak at a similar event in Iowa in May, along with fellow presidential candidates Ben Carson and Senator Ted Cruz.

3. The Center for Security Policy Was Founded by Gaffney in 1988

Gaffney founded the Center for Security Policy in 1988 after leaving the Reagan administration. According to the center’s website, “Under Mr. Gaffney’s leadership, the Center has been nationally and internationally recognized as a resource for timely, informed and penetrating analyses of foreign and defense policy matters.”

Gaffney is also the host of Secure Freedom Radio.

The Center for Security Policy is a not-for-profit, non-partisan educational corporation, according to its website. Salon reported in 2013 that the center has received donations from Boeing, General Dynamics, Lockheed Martin, Northrup Grumman, Raytheon and General Electric.

Gaffney was paid $309,000 in 2013 for being president of the center, according to tax documents on its website.

4. Gaffney Believes in a ‘Massive Islamist Conspiracy’ Against the United States

According to the Southern Poverty Law Center, Gaffney’s believes are rooted in discredited statements made by a lone Muslim Brotherhood member in 1991.

The SPLC says, “to Gaffney, this document is a smoking gun, a mission statement pointing to a massive Islamist conspiracy under our noses.”

Gaffney said in 2011, “When it is impracticable to engage in violence, Shariah-adherent Muslims are still obliged to engage in jihad through stealthy techniques or, in the words of the Muslim Brotherhood, ‘civilization jihad.’ They are doing it through influence operations, the target set of which is comprehensive — government, law enforcement, intelligence agencies, the military, penal institutions, media think tanks, political entities, academic institutions. And they are very aggressively targeting non-Muslim religious communities in the name of ecumenicalism.”

Gaffney has supported the “Birther” conspiracy, and has also claimed Hillary Clinton aide Huma Abedin and Republican Party strategist Grover Norquist are both secret agents of the Muslim Brotherhood.

5. The SPLC Calls Gaffney ‘One of America’s Most Notorious Islamaphobes’

Frank Gaffney testifies at the US Senate Judiciary Committee. (Getty)

The Southern Poverty Law Center calls Gaffney an extremist, referring to him as “one of America’s most notorious Islamophobes.”

The SPLC says the former Washington insider is “gripped by paranoid fantasies about Muslims destroying the West from within,” and “believes that ‘creeping Shariah,’ or Islamic religious law, is a dire threat to American democracy. He favors congressional hearings to unmask subversive Muslim conspiracies, and was even banned from far-right Conservative Political Action Conference events after accusing two of its organizers of being agents of the Muslim Brotherhood.” 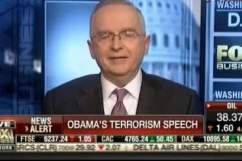