Martin Shkreli, the hated CEO of Turing Pharmaceuticals who became infamous after his company hiked the price of a life-saving drug used by AIDS and cancer patients, was arrested on December 17, 2015, on federal fraud charges.

Shkreli, 32, is accused of using money from another drug company he ran, Retrophin, to pay off debts owed by his failed hedge fund, MSMB Capital Management, Bloomberg Business reports. His attorney, Evan Greebel, was also arrested.

The Brooklyn-born Shkreli has an estimated net worth of $100 million, according to Celebrity Net Worth.

Shkreli’s company, Turing Pharmaceuticals, purchased the rights to the drug Daraprim, which is used to treat a rare parasitic infection that targets pregnant women and AIDS and cancer patients. The 60-year-old drug’s price was hiked from $13.50 a tablet to $750 overnight, sparking outrage earlier this year.

He was released from custody Thursday afternoon after posting $5 million bail following his first court appearance.

1. He Has Already Lost Millions of Dollars Because of His Arrest

Shkreli’s arrest is already causing his net worth to drop.

He owns a majority stake in another drug company, KaloBios Inc. But word of his arrest has caused the value of that company to drop quickly. According to MarketWatch, Shkreli is losing more than $25 million on his KaloBios stock.

Trading on the stock was halted indefinitely Thursday morning, but not before it’s price dropped. Shkreli was named as CEO of KaloBios in November after buying 2,075,200 common shares in the company.

2. He Is Being Sued for $65 Million By His Former Company

In addition to being arrested in connection to the alleged Retrophin fraud, he is also being sued by his former company.

Shkreli is being sued for $65 million, Forbes reports. He has called the accusations were “preposterous.”

Read Retrophin’s claims against Shkreli below: 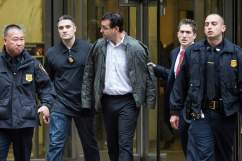 3. He Has Worked on Wall Street Since He Was 17

Martin Shkreli is brought out of 26 Federal Plaza by law enforcement officials after being arrested for securities fraud. (Getty)

Shkreli has been working on Wall Street since he was 17, starting as an intern for Jim Cramer’s company, Cramer Berkowitz & Co.

He was born in Brooklyn as the son of working-class immigrants from Albania and Croatia, according to Bloomberg Business, which says he “both epitomizes the American dream and sullies it.” His parents worked as janitors. 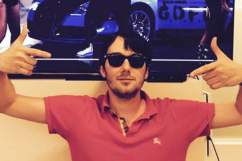 4. He Is Single & Lives in an Apartment in Midtown Manhattan

Shkreli, who is not married and does not have any children, lives in an apartment building in midtown Manhattan.

He was seen by reporters being escorted by FBI agents out of the Murray Hill Tower Apartments Thursday morning, Reuters reports.

A cached version of the page can be seen here. He describes himself as “native new yorker seeks girlfriend. intelligent, handsome and all sorts of other good qualities. i am endlessly entertaining, providing comedic relief and artistic thought in one convenient package. what a catch!”

When asked what he’s doing with his life, Shkreli wrote “i started a drug company to find treatments for rare and severe diseases. i have spare time, however, and i’m excited to build a relationship and share my life with someone.” He’s “really good at logic, difficult situations and tough choices.” Shkreli says he spends “a lot of time thinking about human suffering.”

After Shkreli entered the spotlight, one of his ex-girlfriend’s posted on her blog that he once tried to pay her for sex. She said they dated in college, and he emailed her years later, offering to pay $10,000 for oral sex. She posted screenshots on her blog.

“The final point of contact, which sadly I didn’t capture, was his attempt to refriend me on facebook this summer,” she wrote. “I had unfriended him after he solicited me for prostitution and wouldn’t stop pestering me. Unbeknownst to me, his latest attempt came at around the same time he became CEO of Turing Pharmaceuticals. A friend in finance speculated the surprise contact could be explained by Martin’s sudden acquisition of cash to spend… on women.”

5. He Bought an Exclusive Wu-Tang Clan Album for $2 Million

"THEY SEE ME ROLLING…" pic.twitter.com/D1mDBEeZMq

Shkreli was revealed as the person who purchased the lone copy of a Wu-Tang Clan album for $2 million.

The rap group made only one copy of the album, Once Upon a Time in Shaolin, in 2014 and sold it to the highest bidder. RZA, the de facto leader of the Wu Tang Clan, told Forbes, “We’re about to put out a piece of art like nobody else has done in the history of music. We’re making a single-sale collector’s item. This is like someone having the scepter of an Egyptian king.”

The buyer of the album was forbidden from releasing it commercially for 88 years. Shkreli is allowed to release it on the Internet for free, or to play it himself.”

Shkreli said in a recent interview with Hip Hop Dx, ” I’m not going to play it for no reason. If Taylor Swift wants to come over and suck my d**k, I’ll play it for her.”

Loading more stories
wpDiscuz
7
0
Would love your thoughts, please comment.x
()
x
| Reply
Martin Shkreli, the CEO of Turning Pharmaceuticals who hiked a life-saving drug's price, was arrested on securities fraud charges. What is his net worth?