The shooting was investigated by the Independent Police Review Authority, and was reviewed by the Cook County State’s Attorney’s Office. The FBI declined to participate in the investigation.

On December 7, 2015, State’s Attorney Anita Alvarez announced at a press conference that Hernandez will not face charges in the shooting.

Alvarez also released 911 calls and police radio transmissions related to the shooting. The video does not include audio, but the police radio audio was timed to play over it by the state’s attorney’s office.

Johnson was shot as he ran from officers during a foot chase. Hernandez shot him two times moments after the officer exited his vehicle. At least two other officers were also chasing Johnson at the time of the shooting. Johnson was shot in the right knee and through the right back shoulder. The second shot severed his jugular vein and exited through his eye socket, the state’s attorney’s office said.

Johnson, 25, was shot on October 12, 2014, after he was involved in another shots fired incident. He was in a car with friends when someone fired at their car, shattering the back window. Police said Hernandez responded to the shooting in an unmarked car and tried to stop Johnson. Hernandez can be seen in the video firing at Johnson as he fled from the responding officers.

Police said they recovered a gun near Johnson after he was shot. The state’s attorney’s office said the responding officers told Johnson to drop his weapon numerous times, and did not know if he was the shooter or the victim in the earlier shots fired incident.

The release of the video comes after a dashcam recording led to a charge of first-degree murder against Officer Jason Van Dyke in the 2014 shooting of Laquan McDonald. That video was released to the public after a judge ordered the city must comply with a Freedom of Information Act request. The city had initially fought the release of the video. The Johnson video was released without protest by the city.

The video was released on the same day the U.S. Department of Justice announced it has launched a Civil Rights probe into the city of Chicago’s police department, and about a week after Mayor Rahm Emanuel asked the city’s police superintendent, Garry McCarthy, to step down. Emanuel has also removed the head of the Independent Police Review Authority and set up a task force to review the department. 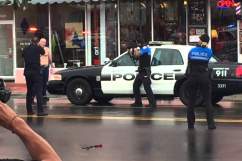