A video, which you can watch above, shows Kansas shooting suspect Cedric Ford firing a rifle into a field.

The video was posted in September 2015.

Ford is suspected in a series of shootings, including at his workplace, Excel Industries, in Hesston, Kansas, and around Harvey County. A father and painter at the lawnmower plant who was known as a “nice guy,” he had multiple photos on his Facebook page with weapons. He had a felony record in Florida and had also been arrested in Kansas, according to online court records.

After someone said to him in a comment on the above photo, “Ain’t nothing new my Dogg been having that heat,” he responded, “Every day since I hit them streets … And all my real goons know.”

Another photo shows him with a handgun on his lap:

You can read more about the shooting and the suspected gunman here: 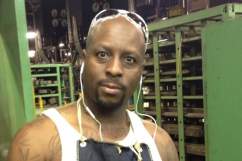