Joshua James is accused of throwing a gator through the drive-thru window of a Palm Beach, Florida, Wendy’s restaurant. (Florida Fish and Wildlife Commission)

A 24-year-old Florida man is accused of throwing a live alligator through the drive-thru window of a Wendy’s fast food restaurant.

Joshua James, of Jupiter, was charged Monday with aggravated assault with a deadly weapon and unlawful possession and transportation of an alligator, WPTV-TV reports.

The incident happened in October 2015 at the Royal Palm Beach restaurant, but James was just arrested this week by U.S. Marshals, the news station reports. He was charged by the Florida Fish and Wildlife Conservation Commission.

1. James Allegedly Threw the Gator Through the Window After an Employee Got Him a Drink

The gator on the loose in the Wendy’s restaurant in Palm Beach, Florida. (Florida Fish and Wildlife Commission)

Joshua James admitted to police that he found the alligator on the side of Southern Boulevard, near the Wendy’s restaurant, and captured it, putting it into his truck, WPTV-TV reports.

At about 1:30 a.m. on October 11, Fish and Wildlife Conservation Commission officers were called to the Wendy’s, which is in Royal Palm Beach near Loxahatchee, for a report that an alligator had been thrown from a vehicle into the restaurant.

According to the incident report, the officers watched surveillance video, which has not been made public. The report says the video shows a white pickup truck, allegedly driven by James, pulling up to the drive-thru window. He was wearing a white T-Shirt and a backwards hat. The employee can be seen giving the driver a drink and then turning her back to him to go to the register.

James then “reaches across the inside of his vehicle in the passenger area and throws an alligator from his vehicle,” into the restaurant, the report states.

He was tracked down using a credit card receipt for the drink he bought, according to the report. 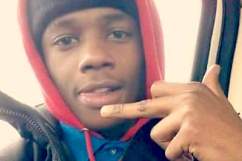 2. The 3 & 1/2 Foot American Alligator Was Released Into a Canal After Being Caught

An American Alligator sits in a waterway at the Merritt Island National Wildlife Refuge March 27, 2009 in Titusville, Florida. (Getty)

The Fish and Wildlife Conservation Commission officers were able to capture the 3 and 1/2 foot American alligator after it got loose in the restaurant, according to the incident report.

The gator was in the Wendy’s kitchen.

“I taped its jaws shut for safety and took custody of the alligator,” the officer said in his report. He then released the alligator into a nearby canal.

3. His Mother Says the Incident Was a Prank on a Friend Who Works at Wendy’s

James’ mother told WFLX-TV that it was just a prank on someone he knows who works at the Wendy’s restaurant.

“It was just a stupid prank that he did that’s now turning into this. He’s a prankster. He does stuff like this because he thinks it’s funny,” his mother, Linda James, told the news station. “It was somebody at Wendy’s that they were pranking.”

When asked by a reporter if she thought the Wendy’s employees saw it as a prank, she replied, “well, I mean, how could you not think something like that was a prank?”

4. James Does Not Have Any Criminal History Besides Traffic Tickets

Joshua James, man who allegedly threw an alligator into a Wendy's in Loxahatchee in October, appears in court. pic.twitter.com/RWbsvf4CPL

According to the Palm Beach Post, James does not have any prior criminal history, except traffic tickets.

James’ mother, Linda, told WFLX-TV her son is not a violent person. He is charged with assault with a deadly weapon with intent to do less than murder.

“I don’t even get that. I don’t get it,” she told the news station about the charge.

She said James will cooperate.

“He’s a stupid kid. He did a stupid prank,” she told WFLX. “He had no problem with turning himself in.”

5. James Was Issued $6,000 Bail & Ordered to Stay Away From Animals Other Than His Family’s Dog

James’ bail was set at $6,000 when he appeared in court for the first time on Tuesday, according to the Palm Beach Post.

The judge barred him from being around any animals, except his family’s dog, the newspaper reports.

Loading more stories
wpDiscuz
15
0
Would love your thoughts, please comment.x
()
x
| Reply
A 24-year-old Florida man is accused of throwing a gator through the drive-thru window of a Royal Palm Beach Wendy's restaurant.