A previously deported undocumented immigrant from Mexico is suspected in the deaths of five men in Kansas and Missouri, authorities say.

The suspect, Pablo Antonio Serrano-Vitorino, 40, was arrested early Wednesday morning after being on the run for more than a day, police said, according to the Kansas City Star.

Four people were found dead Monday night in a home in the 3000 block of South 36th Street in Kansas City, Kansas, the newspaper reports. A fifth man was shot to death Tuesday in Missouri.

Two of the victims have been identified as brothers Clint and Austin Harter, KSHB-TV reports. The other victims were identified as Mike Capps, Jake Waters and Randy Nordman.

1. Serrano-Vitorino Lives Next Door to the House Where the First 4 Victims Were Found

Pablo Serrano lives in a house next door to the home where four people were found shot Monday night, the Kansas City Star reports. He is believed to have been in the home prior to the shooting and then fled before police arrived, investigators say.

Three of the men were dead when officers arrived and the fourth later died at the hospital, police said in a press release.

4 homicide victims found in house on right, person of interest lived in house on left pic.twitter.com/WtdCdcf1Kn

“There’s a lot of neighbors outside,” Kansas City Police Officer Cameron Morgan told WDAF-TV. “A lot of them know each other, a lot of these houses back here are owned by the same people, so they’re all familiar with each other. They had some information for us, but they all pretty much heard and saw things.”

Police have not yet said if they have a motive for the shooting.

2. The 5th Victim Was Shot Dead Not Far From Where Serrano-Vitorino’s Car Was Found

Kansas City murder suspect's truck found between #STL and Columbia on I-70. Police are searching for Pablo Serrano pic.twitter.com/Xu8kd2TXEL

Police found the fifth shooting victim dead not long after locating the vehicle Serrano-Vitorino is believed to have driven away from the quadruple homicide scene in Kansas, WDAF-TV reports.

Serrano-Vitorino’s red 2002 Dodge Ram 1500 pickup truck was found abandoned along I-70 near Montgomery County, Missouri, which is about 170 miles east of Kansas City, the news station reports. It was found at about 8 a.m.

The fifth victim was then found inside a home east of Highway 19 on the south outer road, police said.

3. He Was Deported in 2004 & Was Released From Custody Following a 2015 Arrest, Despite an Immigration Detainer

Serrano was arrested for alleged domestic violence in Wyandotte County back in June 2015. Unknown if went to court pic.twitter.com/njZ7lGlfJA

According to WDAF-TV, he was charged with domestic battery in June 2015 and was held in the Wyandotte County jail. Details of that case have not been released.

According to the Kansas City Star, Serrano-Vitorino was previously deported for being in the country illegally.

The Department of Homeland Security told KSHB-TV that Serrano-Vitorino was deported back to Mexico in April 2004 and then illegally returned to the United States on an unknown date.

Immigrations and Customs Enforcement placed a detainer on him while he was being held at the Johnson County Detention Center in Kansas in 2015, but he was released from local custody “without ICE being notified,” Homeland Security says.

4. Serrano-Vitorino Was Found After Police Received a Tip About a Man With a Gun

Police were able to take Serrano-Vitorino into custody Wednesday morning after receiving a tip from a member of the public about a man with a gun, WDAF-TV reports.

He was found in a ditch near the convenience store where he had been spotted, police said.

“Us as law enforcement, we’re very relieved that it ended the way it did,” Missouri Highway Patrol Sergeant Scott White said. “And I know a lot of the citizens are breathing a sigh of relief also. We have five people that have been killed and certainly we didn’t want anymore injuries didn’t want anymore deaths.”

He was considered armed and dangerous, the Missouri Highway Patrol said. He was possibly armed with an AK-47 rifle, KMBC-TV reports.

5. One of the Victims Lived in the Home & the Other 3 Were Friends From the Neighborhood

Family says Clint Harter & his brother Austin were visiting two friends at this house before a neighbor opened fire. pic.twitter.com/TdHunzr9Ps

One of the men killed in Kansas City lived in the home where the victims were found, the Kansas City Star reports. The other three were friends who live in the same neighborhood, the newspaper reports.

“He was a pretty good guy,” a man who lived nearby told the Star “As a neighbor he would give you the shirt off his back.”

Ruth Harter, the pregnant wife of Clint Harter and brother-in-law of Austin Harter, told WDAF-TV, “I want him found. I just want justice for my kids.”

Family friend Lana Payton told the news station, “This family just had a lot of losses lately and they just really need everybody’s prayers in and help to try to find whoever did this.” 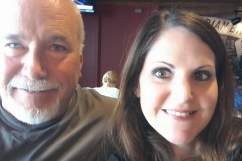