A 27-year-old Colorado mother has been arrested after police said she was recorded abusing her young son in a video that went viral online.

The video, which you can watch below, has been viewed more than 400,000 times on YouTube and also spread across Facebook. A petition started on Change.org to have the 3-year-old boy taken away from his mother has received more than 29,000 signatures.

“In regards to the viral video an arrest has been made and the child is safe in protective custody,” Lochubie Police said in a Facebook post on Thursday.

Kennedy was in a wheelchair during her first court appearance on Thursday, The Denver Channel reports. Her attorney said she is a single mother on permanent disability who suffers from scoliosis and cerebral palsy. Prosecutors called the video “horrifying.”

1. The 16-Minute Video Shows a Woman Threaten to Kill Her Son & Throw a Booster Chair Into His Playpen

The 16-minute long video shows the woman, who police say is Katrina Flores Kennedy, verbally berating her young son, including threats that she is going to kill him. The woman is also seen throwing a booster chair into the boy’s playpen and hitting him.

The woman is apparently angry at the boy because she cannot find her phone charger.

You can watch the video above. It was recorded on April 30, 2016, police said. Investigators learned of the video on May 9 after it was posted online, according to the arrest affidavit obtained by The Denver Channel.

Police say Kennedy tells the boy “you’re going to die,” and says “I’m going to kill you.” She also calls him a “f*cking piece of sh*t” and says “where’s my f*cking charge, find my charger.”

The boy can be heard screaming and crying in the video.

The boy had bruises on his right and left arms and a bruise on the back of his legs, police said, according to the Denver Post. He also had dark spots on his forehead, police said.

Kennedy told police she lost her temper and knows she was wrong, according to court documents. She also said she will “take responsibility” and admitted to throwing something at him.”

She also said her son lost his phone charger and he later found it for her.

Kennedy said social services has been involved with her in the past, according to the affidavit. 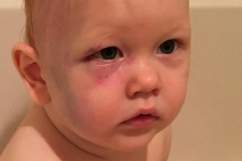 2. The Woman Who Filmed the Video Told Police She Didn’t Report It Because She Was Scared of Kennedy

The woman who recorded the video posted it to Facebook after realizing the child was still with his mother, according to KMGH-TV. She told police she didn’t turn the video over to police because she was scared of Kennedy, KKTV reports.

“I wish I had called 911 but me and him were terrified, we were scared,” she told KMGH.

The woman who recorded it, who has not been named, was also cited for child abuse, KUSA-TV reports.

Kennedy, who went by Trina Marie on Facebook, posted about the video after it began to go viral:

Sigh… So apparently sue posted the video of me yelling at my son bc of a charge. & it’s being shared all over Facebook. Well first of all, I’ve spoke to Denver police & Lochbuie police & am speaking w Denver Social Services for over a week now so all the ppl commenting saying they will report me by all means I sent the screenshots of the posts to the social worker & her supervisor & they are aware of everything. So ppl can stay out of my inbox & my sister’s not knowing the circumstances leading up to her recording me losing her temper. & I don’t have to explain any further bc I been very very honest w the social service since last June. If they felt Romeo was in any danger or harm I wouldn’t have him now…Plain & simple. Its my life my stress & unless anyone is really gonna step in & help me constantly with my son & his terrible twos or give me a clean environment to lay my son’s head down at night or help me provide for him, I don’t wanna hear shit.

3. The Officer Said He Recognized Kennedy’s Voice From Previous Interactions

Mom arrested, child in custidy after alleged abuse videoLochbuie police have arrested a mother accused of cruelty to a child after a video showing a toddler allegedly being abused was posted on Facebook and YouTube. ◂ The Denver Channel, 7News, brings you the latest trusted news and information for Denver, Colorado, Mile High and the Rocky Mountains. Our mission is to provide useful,…2016-05-19T18:07:54.000Z

According to court documents obtained by KKTV, the video was reported to police in Lochbuie, Colorado, by a man who received it from a friend and knew the suspect’s name.

He brought the video to Lochbuie Police Officer A.C. Ramirez, who said in an affidavit he “recognized the voice from previous contacts.”

Details of the previous contacts involving Kennedy have not been made public.

Ramirez found the woman who recorded the video. An investigation was completed and turned over to the Weld County District Attorney, who made the decision to charge Kennedy.

The first child abuse charge is for “knowingly/recklessly causing injury” and the second is for “permitting a child to be placed in a situation posing a threat of injury.”

She made her first court appearance on Thursday and had her bail set at $3,000. Judge Dana Nichols also ordered her to have no contact with anyone under the age of 18.

Kennedy is due back in Weld County Court on May 27 at 2 p.m.

5. Police in Denver & Other Colorado Cities Also Investigated After Receiving Tips That the Woman Lived in Their Jurisdiction

District Attorney investigating Facebook video of alleged child abuseAuthorities are investigating a video posted on Facebook that allegedly shows a Colorado toddler being abused. Several people emailed the video to Denver7 concerned about the welfare of the child. Denver police told Denver7 that detectives investigated the video Tuesday, determined the incident happened in Lochbuie and contacted authorities there. Aurora police said its detectives…2016-05-19T04:36:05.000Z

The video drew the attention of police in several Colorado cities after multiple departments received tips from concerned citizens who had seen the video online.

The Denver Police Department said on Facebook on Thursday, “To everyone to has been messaging us, tweeting at us and calling our dispatch center to report this video — thank you! However, this is not a Denver case, as it did not occur in Denver. We were made aware of the video earlier this week and have sent it to the proper authorities to investigate. Thanks again to all for your concern and willingness to ‘See Something, Say Something.'”

“We recently had some concerned members of our community post on our page a video which is circulating around on social media that shows a child being abused. It was reported to us because the Facebook user who original posted the video listed Aurora as where she lives,” the department said Wednesday in a Facebook post. “APD began investigating this as soon as we were made aware of the video and discovered that this act of abuse did not take place in Aurora and that it occurred in Weld County. We notified authorities in Weld County and discovered that they were already aware of the existence of the video and that they have already started investigating this matter.”

The Colorado Department of Human Services said in a statement, “The Lochbuie Police Department has announced that an arrest has been made and the child is safe in protective custody. To protect the confidentiality of children and families potentially involved, and in accordance with Colorado statute, we cannot comment further. However, we deeply appreciate the outpouring of concern from Coloradans.

“CDHS encourages anyone witnessing a child in a life-threatening situation to call 911 immediately. If it is not an emergency, call 1-844-CO-4-KIDS (1-844-264-5437) to report all concerns for a child’s safety and well-being to the Colorado Child Abuse and Neglect Hotline.” 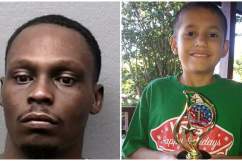