A new poll shows that Hillary Clinton is ahead of Donald Trump by double digits in Iowa, a swing state.

In the poll from Loras College, Clinton is beating Trump in the state 48% to 34%. 11% of respondents said they were undecided, while 4% planned to vote for someone else.

This is a significantly larger lead than previous Iowa polls have shown. A Public Policy Polling poll released last week has the two candidates much closer, with Clinton only beating Trump 41 percent to 39 percent in Iowa. Polls from earlier in the year found the race between Trump and Clinton to be even closer, with several having the two all tied up. 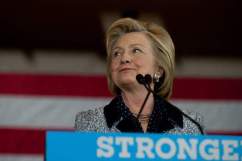 Donald Trump did not name Iowa as one of the states he plans to focus on in the general election. Instead he says he’ll be going for New York, California, Ohio, Florida, Virginia, Minnesota, Michigan, Pennsylvania, Wisconsin and Maine.

This Iowa poll is the latest that is worrying for Donald Trump supporters. A recent poll found that Trump is only 7 points ahead of Clinton in Texas, one of the most overwhelmingly red states in the country. For comparison, in 2012 Mitt Romney defeated Barack Obama in Texas by 16 points.

However, it’s not all bad news for Trump. A recent general election poll from Rasmussen actually shows Trump with a 4-point lead over Clinton nationally. That same poll found that 75 percent of Republicans support Trump for president, as do 14 percent of Democrats.