The man who committed the worst mass shooting in American history was married for two years to a woman from Uzbekistan. Online records show that Omar Mateen wed Sitora Alisherzoda Yusufiy in Florida in 2009. The couple divorced in 2011, reports WPTV’s Joshua Chavers. The announcement for the wedding says the pair lived in Port St. Lucie, Florida.

Mateen later married a second time, around 2013. He had a 3-year-old with his second wife, Noor Zahi Salman.

On June 12, Mateen was responsible for the shooting deaths of 50 people and the wounding of 53 at the gay nightclub Pulse in Orlando. He called 911 to pledge allegiance to ISIS before the attack.

Here’s what you need to know about his ex-wife:

1. Yusufiy Told Heavy.com That Her Parents ‘Rescued’ Her From Mateen

In an interview with Heavy.com, Yusufiy said that she lived in Florida with Mateen between April 2009 and August 2009. She said that her parents then “rescued” her from the relationship and she never saw Mateen again. The divorce process took two years because of the long distance.

During the aftermath of the shooting, Yusufiy posted a note of condolence to her Facebook page, saying:

May they transition in peace may their souls be healed, may the wounded victims recover and heal in peace, may the families and loved ones heal and find their peace….

In a separate interview with the Washington Post, Yusufiy said that the couple met online and she moved to Florida in 2009 to be with him. The couple lived in a condo owned by Mateen’s parents. She told the Post:

He was not a stable person. He beat me. He would just come home and start beating me up because the laundry wasn’t finished or something like that…He seemed like a normal human being. He was a very private person.”

She added that her parents “literally saved my life” when they came to rescue her.

2. She Believed Ebola Came to America Because the U.S. Government Is ‘Destroying the World’

In a 2014 Instagram post, Yusufiy described her feelings upon hearing that a case of Ebola had been diagnosed in the United States. She said she wasn’t surprised because “Americans want to swear they’re on another level of untouchable.” Yusufiy added, “Lol if only they knew it’s because their own government is destroying the world. But it’s only a matter of time before it all hits home.”

3. She Says on Her Blog That ‘The Self Is the Reason for Our Conflicts’

On her Facebook page, Yusufiy says she’s engaged to a Brazilian man named Marcio Dias. He is the founder and CEO of Rainforest Awareness Worldwide.

According to her LinkedIn page, Yusufiy also works there as the creative marketing director. She also maintains a blog called Story of a Star, where she posted the following:

Here we are, with our experiences, our memories, our perception of what is. Our individuality, heritage, race, religion, culture, social status, and so on … our manifestation of the SELF, the EGO.

This SELF is ultimately the reason for all our conflicts in everyday life and in humanity and this entire planet as a Whole. I mean it bothers me that as capable as we are as humans, as many senses as we have, we have still not come to the common sense of living in harmony. So I figured I’ll start with myself.

In another blog post, Yusufiy wrote that she left her native Uzbekistan for the United States when she was 11 years old. The post makes no reference to her time living in Florida. Yusufiy describes meeting Dias when she was 26, referring to him as a “spiritual leader and medicine man from Brazil.” She also says:

Thanks to my father I spent a lot of my childhood traveling, attending private schools and fluently speaking 5 languages by the age of 8.

Living in different continents really opened my mind to the beauty of our World, while going back to live with my grandparents firmed my roots deep in the Earth and elevated my dreams to the highest stars.

Yusufiy says, “I envision the day that every being is happy, healthy and in peace.” In another section of her website, she writes, “I was 6 years old when I recognized my love for art. Staring at a painting Rembrandts Museum in Amsterdam, I got lost in the moment the artist captured so magnificently. I could’ve been there for hours for all I know because I was lost in time, until my father came looking for me.” 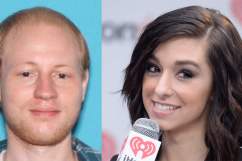 4. She Has a Cosmetology License in New York City & Previously Worked at a High-End 5th Avenue Salon

Yusufiy attained her cosmetology license in New York City in July 2014, according to online records. Between 2014 and 2015, she worked at the upmarket Louis Licari salon on 5th avenue in Manhattan, according to her LinkedIn page. She’s also a graduate of Montclair State University, where she studied psychology, and has a license to work as a home health care worker in New Jersey.

5. Mateen’s Father Says His Son Was Angry After He Saw 2 Men Kissing in Miami

Yusufiy told the Washington Post that when she lived with Mateen he wasn’t very religious. She said he would often go to the gym and to work, as a security guard at a local juvenile hall. The Post reports Mateen “gave no signs of having fallen under the sway of radical Islam.”

Mateen’s father told MSNBC that the shooting was not about his son’s religion, but that his son became very angry after seeing two men kissing in Miami months ago. He said “we are apologizing for the whole incident.”

“We are saying we are apologizing for the whole incident. We weren’t aware of any action he is taking. We are in shock like the whole country,” Mir Seddique, his father, told NBC News.

Loading more stories
wpDiscuz
53
0
Would love your thoughts, please comment.x
()
x
| Reply
The man who committed a mass shooting at an Orlando nightclub on June 12 married his wife in Florida in 2009 and divorced in 2011.