Officer Brad Garafola, a 45-year-old sheriff’s deputy and married father of four, has been identified as one of the three deceased officers in the mass shooting of Baton Rouge law enforcement. His wife told The Advocate newspaper that Garafola made family a priority.

The other two officers who died were also named; they are Montrell Jackson and Matthew Gerald of the Baton Rouge Police Department. Garafola worked for the East Baton Rouge Sheriff’s Department.

Brad Garafola #BlueLivesMatter Pray for these officers and their families. pic.twitter.com/JE2uw6lGy0

In addition, three other officers were shot in the July 17 early morning shooting, according to the East Baton Rouge Sheriff’s Department. “These men are husbands, fathers, sons and brothers,” Sheriff Sid Gautreaux said. 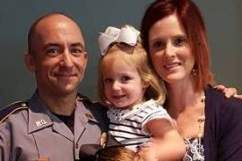 The Sheriff’s Department said the gunman, Gavin Eugene Long, was shot and killed at the scene. WBRZ says the dead gunman is from Missouri.

Police now say they think Long was the only gunman, despite earlier reports that others could be at large; however, they are still investigating whether anyone knew about the plot. Long is a former Marine who served in Iraq and who posted prolific ramblings online about police-related shootings, dating advice, the military, revolutionary bloodshed, and conspiracies. He used an alter ego named Cosmo Setepenra to do so, and praised the Dallas police shooter, as well as expressing upset over the deaths of Alton Sterling and Philando Castile, African-American men killed by police in Baton Rouge and Minnesota.

1. Garafola Was Working Extra Duty at The Store Near The Shooting & His Wife Encountered The Scene on Her Way to Meet Him

The Advocate newspaper says Garafola was “working extra duty” at the B-Quik convenience store on Airline Highway, and his shift ended at 8 a.m. His wife, Tonja, went to see him and “ran into a sea of police cars.” Her husband, who was working a final shift before going on vacation, didn’t answer his cell phone, said The Advocate.

One witness told WAFB news station that up to 30 shots were fired. “A witness described hearing at least 25 to 30 gunshots in the area of the B Quick store,” said WAFB. “Unknown where the shots are coming from,” WAFB said police dispatch audio recorded one officer as saying.

“I walked out into the street to see what was going on, there was a man lying in the street,” the witness said. “I assume he was dead because he wasn’t moving.” That witness believed the shooting started before police arrived, however, said the station.

Another witness told The New York Times he heard up to 12 shots. Mark Clements heard the shots while in his backyard. “I heard probably 10 to 12 gunshots go off,” he told The Times.

WBRZ said the highway where the mass shooting happened is located less than a mile from the headquarters of the Baton Rouge Police Department.

2. Friends Posted Tributes to Garafola, Who was 45 & Married With Four Children

One woman who knew Garafola wrote on Facebook, “RIP Officer Brad Garafola. This breaks my heart. I loved him so much, he was such a great friend to all of us growing up.”

Another woman who knew him wrote, “Brad was always a great example to so many in the Southeast area! Please pray for some peace!!”

The Advocate says Garafola had four children – ages 21, 15, 12, and 7. His wife told the newspaper that family was his priority, saying, “He loved us so much. He was always bragging about his family.”

Officers from both the Baton Rouge Police Department and Baton Rouge Sheriff’s Department had responded to a report of a man carrying a rifle on a highway, according to The New York Times. The man was later identified as Long, a former Marine who was from Kansas City, Missouri.

Long used the name Cosmo Setepenra online and, in online writings, he had discussed the Dallas mass shooting of police officers and recent police shootings of black men. “Violence is not THE answer (its a answer), but at what point do you stand up so that your people dont become the Native Americans…EXTINCT?” said one post he wrote on Twitter just four days before the attack in Baton Rouge.

#Breaking: Police received call of "suspicious person walking down Airline Highway with an assault rifle," when they arrived he opened fire.

The shooting occurred along Airline Highway, which has been the scene of recent protests over the shooting death by Baton Rouge police of Alton Sterling, an African-American man whose shooting outside a local convenience store was captured on citizen cell phone video. Protesters temporarily blocked traffic on the highway. The Sterling shooting is still under investigation.

3. Garafola Had Worked For the East Baton Rouge Sheriff’s Department For Half His Life

Garafola had served with the East Baton Rouge Sheriff’s Department for 24 years, more than half his life, said The New York Daily News. A man who knew him wrote on Facebook, “My heart breaks for the officers that were gunned down, especially this man, I have worked with him a few times in the past, very professional and just a nice guy, always a pleasure. He used to do the evictions with us in Baton Rouge.”

WBRZ said a suspect with a mask was walking down the highway shooting “indiscriminately.” That suspect turned out to be Long, whom authorities now believe acted alone at the scene (although they are still investigating whether anyone else knew about the plot). Police sent a robot to check for explosives, WBRZ said. Sheriff’s officials said in a Sunday afternoon press conference that there was no longer a threat of an active shooter.

Officials with the Ascension Parish Sheriff’s Office, which contributed to the SWAT team at the scene, released a statement on Facebook saying in part: “At mid-morning today, at least one person and (likely more), dressed entirely in black, armed with a rifle and walking South on Airline Highway in Baton Rouge, opened fire on responding East Baton Rouge Sheriff’s Office deputies and Baton Rouge Police Officers killing several and wounding more.”

That sheriff blamed a “frenzy of anti-police rhetoric” and defended police officers (again, authorities have now said they think Long acted alone, although they initially took two other people of interest into custody).

Federal authorities say a group of men and a young boy were involved in a foiled plot to steal guns from a pawn shop and use them to kill Baton Rouge police officers. A robbery led police to uncover that plot before anyone was harmed.

That plot, which also involved a 15-year-old boy, according to police, was planned in retaliation for the Alton Sterling shooting.

5. Some Black Lives Matter Protesters Were Applauding the Deaths on Twitter & Others Were Blaming the Protest Movement

Some expressed happiness over the deaths, attracting heated criticism from other users.

However, others said it was unfair to blame an entire movement, especially when so little was known.

If you're already blaming #BlackLivesMatter for #BatonRouge, when we have very few details, you are the problem.

Other people called for everyone to stop generalizing.

Not all cops are bad
Not all black people are criminals not all white people are racist
Stop labeling! #BatonRouge