A young girl told 911 dispatchers that her parents were dead in their Fullerton, California home the morning of September 24. When officers arrived they found three deceased adults identified as Christopher Yost, his wife Jennifer Yost, and Arthur William Boucher, who was reportedly a friend of the couple.

Two children of the couple, aged 6- and 9-years-old, were found unharmed in the home. However, an alert was made to help locate a third child, Katlynn Goodwill Yost, 17, the daughter of Jennifer Yost. She was later found in good health.

Police arrested three suspects in the triple homicide, including a 17-year-old. Police are not confirming if that suspect is Katlynn at this time. According to The Orange County Register, authorities said state law prevented them from giving out this information because of the suspect’s age.

A source who said he knew Katlynn spoke with Heavy.

1. One of the Suspects Warned About the Murder Before it Happened

In addition to the teen’s arrest, Josh Acosta, 21, and Frank Felix, 25, were also arrested on suspicion of murder.

Prosecutors said the victims were shot to death, and Acosta and Felix are charged with three counts of murder, and special circumstance charges of committing multiple murders, according to the Orange County District Attorney’s Office.

The teen’s charges aren’t being broadcast to the public at this time.

It is not known if prosecutors will seek the death penalty in the case, and the suspects are being held without bail, NBC Los Angeles reported.

An anonymous source told Heavy that he believes Felix and Katlynn were romantically involved, and provided a screenshot showing an alleged conversation between Felix and Cody Dunn, which shows Felix sending out a warning that he was going to be “assisting someone with murder”:

Dunn apparently tried talking Felix out of the murder. “U make your own decisions if u want to help murder someone ur going to have to suffer the consequences,” he wrote.

It is not known if authorities were called about the conversation, which occurred four days before the slayings took place.

Personally, having met Katlynn in the past, heard her speak of her mother, and her behavior, I am not the least bit surprised nor do I believe she is an innocent part in this tragedy…As far as her talk of her mother it was never positive, always seemed resentful and disrespectful. She was definitely a mentally unstable teen.

Authorities said all of the suspects knew the family, according to KTLA.

Katlynn, who goes by “Katie,” was friends with Frank Felix, who used the name “Entey Felix” on Facebook.

In a post from September 21, Felix said he was often “bullied” and felt “out of place” in the past. However, he said things changed and that his life was looking better.

Acosta was described in a Facebook post by Carlos Beltran. “That boy Josh Acosta? Met him not too long ago,” he said. “We talked about our military experiences. The dude seemed so mellow and kind and chill. I guess it goes to show, you never know who you is talking to.”

“We hope the quick arrest of these individuals will bring comfort to the community and assist the friends and family of those affected by this unthinkable crime,” Fullerton police Sgt. Jon Radus told the Associated Press.

2. She Belonged to a ‘Furry Community’ & Was Looking for a ‘Handler’ 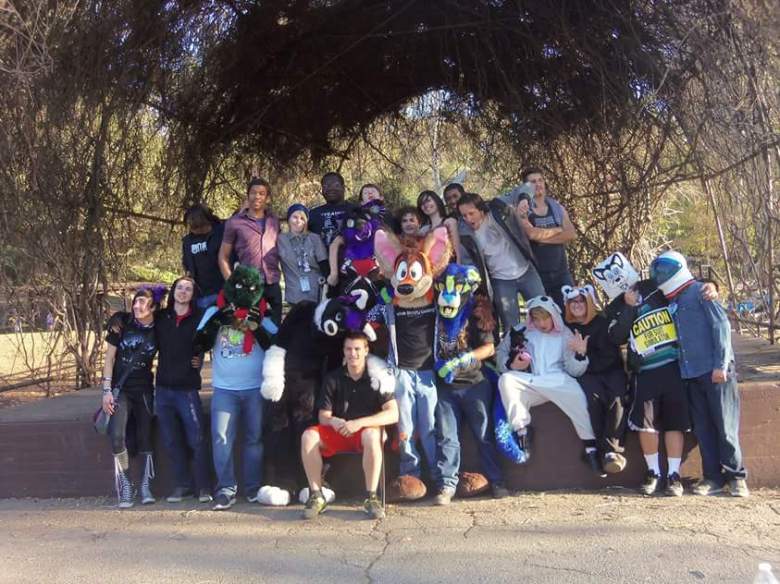 Throughout Katlynn’s social media accounts are photos and links to the “furry community.”

The suspects in the case were also linked to the group, according to their social media accounts.

The term ‘Furry’ is used to describe the Furry Fandom or an individual ‘Furry’ fan, also referred to as ‘Furries’.The Furry Fandom grew out of the science fiction and fantasy communities as a unique group focused on anthropomorphic animals and creatures. Anthropomorphic animals are animals with human characteristics such as the familiar cartoon characters Bugs Bunny and Mickey Mouse or popular mascots like the Philadelphia Eagle or San Diego Chicken.

It appears the teen has been involved in the furry scene for years. A photo from 2011 showed her holding a knife to a masked figure while appearing to be in costume herself:

In December 2015 Katlynn tweeted that she was looking for a handler:

Some of you may know that I am getting a full suit soon I am looking for a handler who can help me. pic.twitter.com/AtR9UBcZDG

She was especially drawn to fox furries, and used the handle “daydreamerfox” on Twitter:

Katlynn said she worked at and attended “Califur,” a convention for furries in California.

A source told Heavy the furry community shouldn’t be judged based on the murders. He stated:

Basically, the community is like a big family, and like all families we have those few who are bad eggs. I believe three troubled youths were very troubled, not completely there by a mental stand point. However like anything else, you can’t judge the group as a whole, many of the Socal furry community are stand up citizens, many holding high level jobs with companies like jet propulsion labs for NASA, even some attorneys and doctors, they are a charitable community and these events are saddening and to some unlike myself, very surprising.

In the above tweet, Katlynn described being pushed into a mirror by bullies who called her “ugly and worthless.” She continued the tweet into four parts and ended it by saying:

The teen seemed to have better self-esteem at one point:

Since when did I become decent looking pic.twitter.com/yGhU23Unxw

She was excited about being asked out:

Something interesting happened today my crush asked me to go to the mall with him so I went, and he asked me out in a engagement ring store!

But she often tweeted about using alcohol:

4. She May Have Had Relationships With Older Men That Her Parents Didn’t Approve of

In the screenshot above, people said Katlynn dated older men, and that her parents didn’t approve. Nick Miller said “she didn’t get along with her mother.”

Chris Yost, who worked as a mechanic, was Katlynn’s stepfather. The two were friends on Facebook and his profile picture featured the teen:

The Associated Press spoke with a friend of Katlynn’s mother, who said she had forbidden her daughter from seeing Felix. “To protect her daughter, Chris and Jenn were like, ‘We don’t want you to be friends with our daughter anymore,’” Melinda Giles told the publication.

The couple was also involved in the furries community. A source spoke with Heavy and said that she believed they were hiding from bigger issues through the costumes and lifestyle:

Sometimes (in my opinion often) when a person is uncomfortable with themselves they become furies. Therein they can cover themselves entirely (they don’t even have to speak) and escape into someone/thing that is completely fabricated and “attractive.” Katlynn was then a party to this. On the one hand it could be good for her self-esteem to be able to cover herself, but in this case I think it lead to a severe detachment from reality. My husband states that looking back, he never saw Katlynn exhibit any form of compassion or empathy. Another friend said many years ago they had to stop allowing their own 6 year old being babysat by the Yosts because Katlynn was too mean to their child. Even the 6-year-old knew how she behaved was wrong. She needed counselling. She was not mentally healthy. This was not addressed.

The source stayed with the Yost family and spoke about her experience. She said:

My husband and I used to stay with them for few months of the year. Everyone has painted them in social media as such a nice loving family, but I’ll bet they have never been around them full time. It is the only place I have actually vehemently vetoed staying. It was a very unhealthy place for us to be and I couldn’t stand it for too long. The mother screeched and yelled all the time like a 10-year-old and was a terrible example for her children.

5. Her Mother Sold Voodoo Dolls for a Living

According to her Facebook account, Jennifer Yost owned “Vixie’s Creations,” where she sold crystals, “plushies,” and voodoo dolls.

On the jadenravendeviantart.com, she described herself as an artist and hobbyist. She also stated:

I’m a very out spoken person I am very proud of what I believe in and speak freely about my belifes. I am fun loving and enjoy a good time as much as the next person. My priorities lye with my family and a few of my close friends that I consider family. I’ve worked hard to get where I am if my life and I try to not to let things bring me down. I’m a carefree spirit with alot of love to give when the right person comes along…

Katlynn also tried making money off of art and sketches:

Yo peeps I'm opening up for commissions for Califur! I need to make atleast $110 but anything less is okay. pic.twitter.com/vgWR2skepA

Loading more stories
wpDiscuz
26
0
Would love your thoughts, please comment.x
()
x
| Reply
Investigators discovered a triple homicide Saturday in Fullerton, California. An alert was issued for a member of the "furry community," Katlynn Yost, who may also be a suspect in the killing of her parents and a family friend. Read the latest on the case here.