Phoenix Police End Chase and Shoot Suspect***WARNING – VIOLENT AND DISTURBING IMAGES*** On Tuesday September 6, 2016 at around 1220, Phoenix Police officer ends a pursuit of a suspected armed robbery suspect by using undercover and personal vehicles to ram and PIT the fleeing vehicle. The officers then fired when thier lives were put in jeopardy.2016-09-06T20:00:19.000Z

An armed bank robbery suspect was killed by police at the end of a pursuit that was shown live on television in Phoenix, Arizona, on Tuesday, officials say. You can watch video of the shooting above.

The Tempe Fire Department said the suspect was pronounced dead at the scene, KPNX-TV reports. Local TV stations quickly cut away from coverage after several officers opened fire on the SUV after it was stopped using a “pit maneuver,” in which officers intentionally crashed into the vehicle, causing it to spin out and then be boxed in.

The chase ended on Interstate 10 and Baseline Road in Temple after beginning about noon in Phoenix, the Arizona Republic reports.

Police began chasing the suspect through the Phoenix area after a credit union was robbed at gunpoint in Avondale, KPNX-TV reports.

You can watch the full chase, and aftermath below:

Phoenix Police said they were assisting Avondale Police during the chase, KTAR-TV reports.

Police said shots were fired at officers responding to the call.

Officers began pursuing the SUV, and the chase lasted about 45 minutes, covering 30 miles, police told the newspaper. Two other suspects exited the vehicle during the chase, and were both taken into custody.

The shooting incident, pursuit and the robbery all remain under investigation by several agencies, including local police, the Maricopa County Sheriff’s Office and the FBI.

The names of the suspect killed by police and the two who are in custody have not been released. 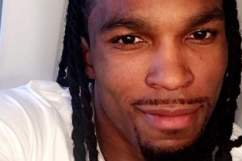 Read More
Arizona, Breaking News, Crime, Phoenix, Police, Video
Phoenix Police opened fire on a bank robbery suspect at the end of a pursuit that was shown live on TV. You can watch video of the shooting here.