EpiPen Maker CEO Grilled By CongressHeather Bresch, the CEO of Mylan which makes the EpiPen is grilled by House members on why the price of the device has risen to about $600. The price of the device, used in emergencies to treat severe allergic reactions, has increased more than 500% since Mylan acquired it in 2007. A two-pack of the EpiPen now has a list price of $608. Rep. Jason Chaffetz asked a simple question to start: You raised the price — what did you think was going to happen? Bresch did a lot of gymnastics to explain how Mylan actually doesn't make that much money on the drug, but Chaffetz wasn't having it. "This doesn't make any sense," he said. "This is why we don't believe you."2016-09-22T04:24:57.000Z

UPDATED: The post has been updated to include lawmakers’ request to Mylan for documents related to EpiPen sales

Mylan CEO Heather Bresch faced a storm of public shaming which included a four-hour Congressional hearing, where she testified about raising the price of EpiPens to $600.

She joins the hated Pharma Bro Martin Shkreli as the latest pharma executive accused of profiting off those consumers who cannot afford to do without lifesaving medication.

Bresch was paid $18 million in 2015 as EpiPen prices increased to $600. The move has renewed the debate surrounding corporate excesses. Hillary Clinton’s campaign has called the EpiPen price hike the, “[the] latest troubling example of a company taking advantage of its customers.”

However, Bresch whose father is US Sen. Joe Manchin (D-WV), knows politics inside and out and has responded swiftly to quell the controversy. She announced rebates on the device for some patients and unveiled a $300 generic version of the EpiPen. Nevertheless, the 47-year-old executive was grilled before the House Oversight Committee on September 21.

“You get a level of scrutiny and a level of treatment that would ordinarily curl my hair, but you asked for it,” said Representative Mick Mulvaney (R-SC) during the hearing.

Here’s a brief history of Bresch’s career path from clerk to notorious CEO of a major pharmaceuticals company. 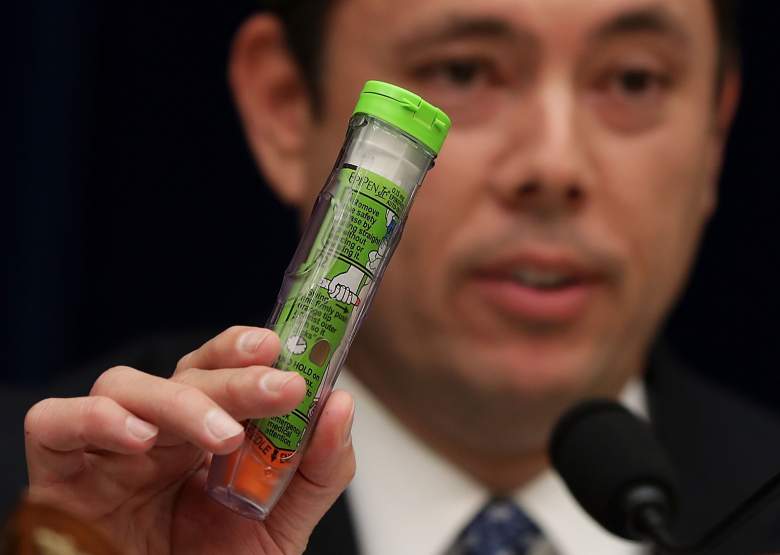 Committee chairman Jason Chaffetz (R-UT) holds up an EpiPen during the hearing. (Getty)

When Mylan acquired EpiPen in 2007, Bresch called the project “her baby”. As the price of the device grew, so did Bresch’s prestige within Mylan. When she became CEO shortly after the acquisition, Bresch focused on marketing EpiPens, turning a middling $200 million business into a $1.1 billion goliath.

The auto-injecter has a near monopoly on epinephrine devices with 90 percent market share at the end of last year, reports Fortune. The price of the anti-allergy, lifesaving device has increased more than 400 percent since it acquired EpiPen in 2007.

Bresch has said EpiPens should be as accessible as defibrillators are, the heart reviving devices found throughout public places. She has supported laws that would require schools to stock EpiPens. They are already required in West Virginia schools, where Bresch’s mother Gayle Manchin was head of the Board of Education. 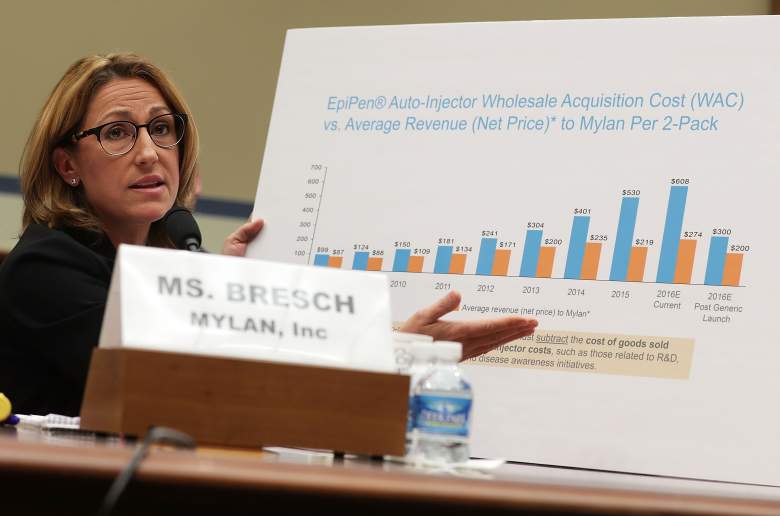 Mylan paid Bresch $18 million in 2015. The company has the second-highest executive compensation out of all US drug and biotech firms in the last five years, according to the Wall Street Journal.

When asked to justify her high salary in a NBC interview, Bresch suggested that the Media misrepresented the situation. She shifted the blame to a healthcare system that overcharges customers.

3. She Is the Only Woman to Run a Fortune 500 Pharma Company 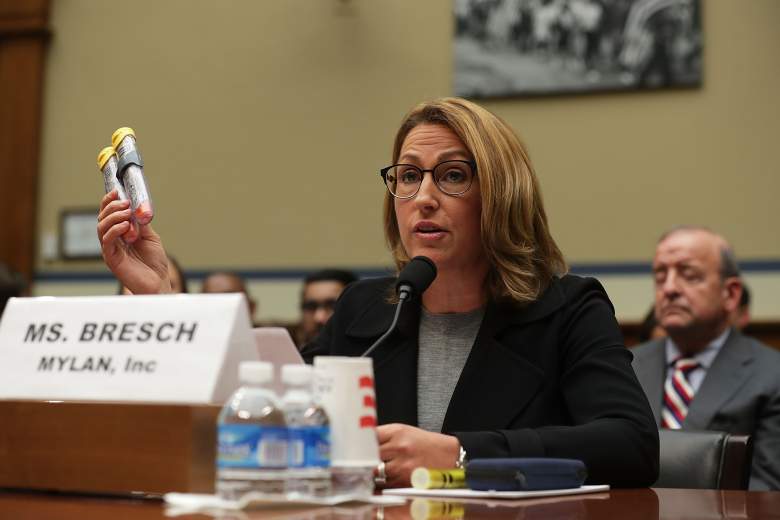 She started out as a clerk at Mylan with the help of her father who knew the pharma company’s CEO at the time. She aspired beyond printing labels and racked up several promotions while learning the ins and outs of the pharmaceutical industry. When CEO Robert Coury took the helm, he laid off several employees and warned Bresch that she might be next. Not wanting to be seen as weak for leaving, she worked even harder impressing Coury and her colleagues. Her coworkers recalled how she once dialed into a conference call from a hospital room after giving birth to her son, reports Fortune.

However, Bresch’s headstrong attitude has often put her at odds with Wall Street. She’s been accused of putting her own interests ahead of investors. When the multi-billion dollar biopharmaceutical Teva showed interest in buying Mylan, Bresch removed decision-making power from shareholders. Bresch previously said her company does not serve Wall Street. 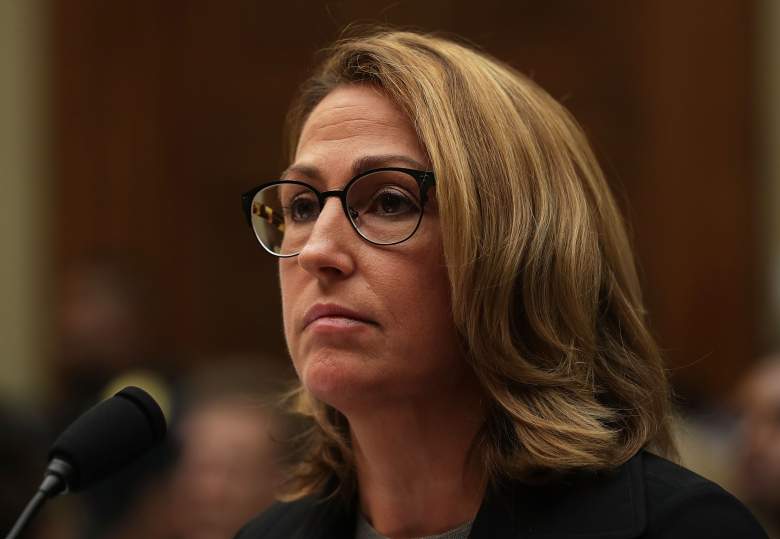 Bresch isn’t a politician, but her family has political sway. (Getty)

No stranger to political drama, Bresch grew up in a family where all issues were on the table, reports West Virginia Living. With eccentric personalities like Uncle Jimmy (former Secretary of State A. James Manchin) in the household, Bresch said she thought heated debates followed by doors slamming was the norm.

While Bresch said she never considered becoming a politician, her family exposed her to the cutthroat nature of politics. While she was in college, her Uncle Jimmy was impeached as West Virginia’s treasurer for losing $279 million in state funds through bad investments. Bresch has also said she took her father’s defeat in his first race for West Virginia’s governor very hard. According to Grapiq Inside Gov, Bresch most recently donated to the Democrats though she did lean Republican prior to 2006. Her spouse Jeff Bresch is a partner at the law firm Jones Day, where he handles a wide range of civil lawsuits from trade secret laws to medical devices.

Still, being a political insider didn’t seem to smooth her way during the House committee hearing. Representative Elijah E. Cummings, the ranking Democrat on the committee, called Mylan’s steadfast refusal to lower EpiPen prices part of a ‘rope-a-dope’ strategy.

“After Mylan takes our punches they’ll fly back to their mansions in their private jets and laugh all the way to the bank,” Cummings said.

Committee members also learned that Mylan’s pre-tax profit for EpiPens was 60 percent higher than the number Bresch reported. Now they are demanding clarification on how much Mylan actually makes per EpiPen. After the hearing, Mylan revised Bresch’s figure of $50/EpiPen to $80. However, the committee still wants Mylan to hand over documents on EpiPen sales.

5. Bresch’s Father Introduced Her to Mylan’s Former CEO & Was Suspected of Approving a Fake MBA for Bresch as Governor of West Virginia 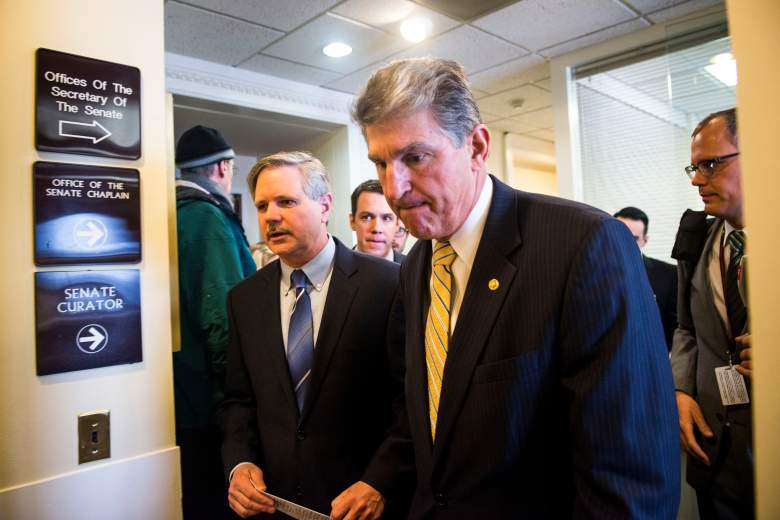 Bresch’s father was a member of the West Virginia senate when he introduced his daughter to Mylan’s CEO at the time. Heather was looking for a job as a newlywed, but she had misgivings about accepting a low position at Mylan as a clerk. Her father eventually convinced her it was a good choice.

While nepotism isn’t new, Bresch made headlines in 2007 after a scandal broke over her MBA degree from West Virginia University. WVU had awarded Bresch an MBA even though she had completed only half the required coursework. The revelation put a spotlight on the relations between Bresch’s dad – West Virginia’s governor at the time – and high ranking school officials.

Although Manchin and Bresch have denied any wrongdoing, the MBA controversy resulted in the provost’s resignation. The school also rescinded Bresch’s MBA. Bresch has said she took the courses for personal enrichment, not to advance her career.

Read More
5 Fast Facts, Congress, Health, Politics
Mylan CEO Heather Bresch came under fire for putting the price of anti-allergy EpiPens beyond reach of many Americans. She appeared before Congress to answer for the price hike.