Delta has apologized after a video showing a supporter of President-Elect Donald Trump standing up and going on a disruptive rant on a flight from Atlanta to Allentown, Pennsylvania.

You can watch the video, posted to Facebook by Delta passenger Emma Baum on November 22, below:

“We have followed up with the teams involved and all agree that this customer should not have been allowed to continue on the flight,” Delta said Sunday in a statement. “Our responsibility for ensuring all customers feel safe and comfortable with Delta includes requiring civil behavior from everyone.”

The man in the video has not been identified.

Baum, who lives in Belize, captioned the video, “Didn’t take long to notice that I’m back in ‘Merica…”

The 21-year-old was traveling home to Pennsylvania for Thanksgiving, she told The Allentown Morning Call. She said she first noticed the man while waiting to board the plane in Atlanta, as he shouted Trump’s slogan, “Make America Great Again,” several times.

She was originally seated next to him on the flight, but switched seats so that the man’s traveling companion could sit next to him, she told the newspaper. While they were waiting for the flight to take off, Baum said she asked the man about the election, and he stood up to talk to her. She asked if he could record him with her cell phone.

“He said, ‘Go ahead! I want to tell everyone about Trump. I hope it goes viral,'” Baum said.

In the video, the man can be heard saying “Really? Ain’t nobody going to say s*it on this plane?”

A woman can be heard yelling, “we can’t hear you!” And he then starts yelling, “Donald Trump, baby! We got some Hillary b*tches on this plane?”

Before sitting down, the man says, “Trump is your president! Every goddamn one of you. If you don’t like it, too bad.”

She told the Morning Call the man was taken off the plane by a flight attendant but later returned.

“When he came back in, he said, ‘This is what I get for being a patriot,'” Baum told the newspaper. He didn’t disrupt the flight again. Baum said she later reported him to airport security and police when they landed in Allentown.

The video had more than 2 million views on Baum’s Facebook page by Sunday.

“The behavior we see in this video does not square with our training or culture and follow up will continue so we can better ensure our employees will know they will be fully supported to make the right decisions when these issues arise,” Delta said in its statement.

In another Thanksgiving week incident, a customer at a Michaels craft store in Chicago was caught on camera during a “racist” rant against employees. You can watch that video below: 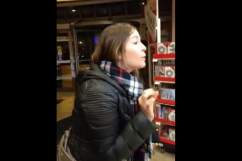 Loading more stories
wpDiscuz
10
0
Would love your thoughts, please comment.x
()
x
| Reply
Delta has apologized and says it should have removed a Donald Trump supporter from a flight after he went on a disruptive rant. Watch the video here.