At a canvass kick-off hosted by the Nevada Democratic Party, Clinton and Labor Secretary Tom Perez will discuss the high stakes of November’s election for Nevada families and highlight Clinton’s vision for an America “that is stronger together, with an economy that works for everyone, not just those at the top.”

She will hold the event at the Plumbers & Pipefitters Training Center at 760 N. Lamb Boulevard. Doors will open at 1:15 p.m. and the event is set to begin at 3:15. The public is invited to attend.

Strong early-voting turnout by registered Democrats shows Clinton has the advantage in Nevada. As of Tuesday morning, 511,000 Nevadans had voted, of those, 43% are Democrats and 37% are Republicans, according to CNN.

However, according to the RealClearPolitics average of statewide polling, GOP nominee Donald Trump holds a 1.6-lead. 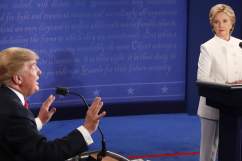