President Barack Obama delivered his Farewell Address on January 10, marking the last time he will speak to the American people as Commander in Chief. The speech is being delivered just 10 days before Donald Trump takes office on January 20.

Obama announced on January 2 that the speech will be delivered live from Chicago’s McCormick Place. It’s a different venue for the traditional farewell address, which has usually been delivered from the White House. Instead, Obama decided to return to the city where his political career began.

“I’m just beginning to write my remarks,” Obama wrote on January 2. “But I’m thinking about them as a chance to say thank you for this amazing journey, to celebrate the ways you’ve changed this country for the better these past eight years, and to offer some thoughts on where we all go from here.”

In addition to the live stream on YouTube, the administration will stream the address live on Facebook at Facebook.com/WhiteHouse.

Obama became the first African American elected President when he beat Senator John McCain in 2008. In 2012, he became the third consecutive president elected to a second term when he defeated former Massachusetts Governor Mitt Romney. He campaigned for Hillary Clinton during the 2016 campaign, but she was defeated by Trump. 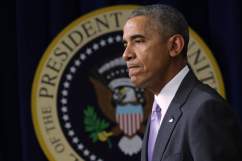