Fox News anchor Martha MacCallum, who anchors The First 100 Days at 7 p.m. ET, has been at the network since 2004. She has been married to Daniel John Gregory since 1992.

The 53-year-old MacCullum and the 54-year-old Gregory are the parents of three children – sons Harry and Edward, and daughter Elizabeth. MacCullum also co-hosts the weekday morning show Newsroom with Bill Hemmer.

Here’s a look at Gregory and their family.

MacCullum and Gregory have been married since August 1992. According to the New York Times wedding announcement, the happy couple tied the knot at St. Elizabeth’s Church in New Jersey in a Roman Catholic ceremony.

The Times notes that Gregory is a graduate of Villanova University. He is from Upper Montclair, New Jersey and MacCallum is from Wycloff, New Jersey. At the time of their marriage, MacCallum was in corporate relations at Dow Jones & Company.

The company currently makes Suncup Juice. “Using SUNCUP as a proprietary portion label and GREGPACK as their brand for 12/32 oz concentrates Gregory Packaging provides an extensive product offering tailored for Health Care, K-12 Education, Elderly Feeding, Day Care Centers and Prisons,” reads a statement on the company site. “All of our juices are packed to USDA and FDA Grade A standards.” 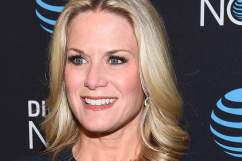 According to her obituary, Cecelia earned a B.A. in English from Kean College, New Jersey after her children started school. Gregory has seven siblings.

She loved musical theater and supported groups like NJPAC and the New Jersey Shakespeare Theater. She was an avid reader and a talented pianist.

“Her many charitable interests also included the American Indian Project, the Heifer Project, Medical Mission Sisters, Covenant House and Haiti orphan relief. Mrs. Gregory volunteered in so many capacities, but perhaps most important to her was that of English literacy tutor to adult learners, as well as to children through the Montclair public school system,” her obituary reads.

4. His Daughter Elizabeth Is Majoring in Political Science at Villanova

MacCullum and Gregory’s daughter Elizabeth is following in her mother’s footsteps by working in politics, but following her father by attending Villanova.

According to her LinkedIn page, she is majoring in political science at Villanova and is set to graduate in 2018. She has a wide range of minors, including Arab & Islamic Studies.

Since August 2012, Elizabeth has contributed to Fox News as a special coverage volunteer and was also on the Republican National Committee communications team in July 2016. She was a campaign intern for Congressman Pat Meehan in Pennsylvania in 2016.

Elizabeth is active on Twitter and writes for SquaredPolitics.com.

5. The Family Has a Home on Cape Cod With 5 Bathrooms

The Gregory family has a home in Chatham, Massachusetts on Cape Cod. MacCallum gave Country Living a tour of the home in 2014. “It had five bathrooms! It was perfect,” MacCallum said.

The home was built in 1960 and has been remodeled several times. The home’s current look was designed by her friend, interior designer Michael Maher. “We decorated on speed dial,” MacCullum told the magazine.

Loading more stories
wpDiscuz
2
0
Would love your thoughts, please comment.x
()
x
| Reply
Fox News anchor Martha MacCallum has been married to Daniel J. Gregory since 1992. Here's a look at their relationship and family.