The man invited on stage by Donald Trump at his Melbourne rally is a married car salesman from Boynton Beach, Florida whose social media pages are practically shrines to Trump.

Gene Huber’s Twitter profile photo shows him standing with a life-size cardboard cutout of Trump. On CNN after the rally, Huber said, “I’ve been with Mr. President Trump for over two years…” He said that Trump saw him on TV, and Huber said he “loved” Trump “with all his heart.” He said of the cardboard cutout: “I salute that every single day.”

On social media, he’s constantly advanced the president’s narratives against the news media and on other topics. Some people think Huber was a staged plant because he wrote on Facebook on February 14 about receiving a call from Trump and has checked in from various Trump properties and the White House on social media.

That all wouldn’t mean, if true, that he’s not really a Trump supporter (or super fan, as it appears), though, just that the moment was perhaps not as spontaneous as it appeared.

#TrumpRally Gene Huber has 6' cardboard of donald in his home which he salutes daily. Waiting for Rod Serling to appear any minute now.

No way Secret Service would have let Gene Huber on stage w/o his being vetted. Huber just said he salutes a box of paraphernalia every day.

Trump asked Huber on stage at his Melbourne, Florida rally on February 18 and declared: “A star is born.” The February 18 rally mirrored one of the president’s campaign rallies.Trump then hugged Huber and turned his microphone over to the fan. Sure enough, the media attention followed.

Who is the man dubbed a star by the Leader of the Free World?

1. Trump Hugged Huber at One Point on Stage & Huber Said He Was ‘Floating’

Trump allows supporter up on stage to speak at rally. "A star is born," he says. pic.twitter.com/V1wgVqfJYu

The supporter ran on stage, and Trump hugged him.

“This guy,” the president said. “So, he’s been all over television saying the best things, and I see him standing. Didn’t you get here at 4 in the morning? Say a couple of words to this crowd.”

Huber later said he felt like he was “floating” during the moment.

Gene Huber-Trump Supporter said he felt like he was "floating"'when Trump pulled him up on stage to speak pic.twitter.com/khAR3LrVEu

Huber, who was wearing a President Donald Trump T-shirt, took the microphone and said, “Mr. President, thank you, sir. We the people, our movement is the reason why our president of the United States is standing here in front of us today. When President Trump during the election promised all these things that he was going to do for us, I knew he was going to do this for us.”

A star is born – @POTUS To a fan #TrumpRally #MAGA pic.twitter.com/hIA0mEmZmp

“Mr. President, thank you so much sir,” Huber said.

“A star is born,” said Trump, who has arguably the biggest bully pulpit in the world. 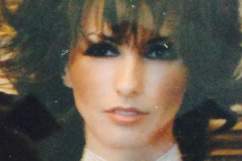 2. Huber Posted on Facebook About a Call From Trump Days Before the Rally, Leading People to Think He’s a Plant

Some people are alleging the moment was staged because Huber posted recently from Trump Winery and checked in at the White House and Trump Tower.

#TrumpPlant "GENE HUBER" Visited WH on Feb 11, among other visits to Trump properties. Received call from Trump on 2.14. pic.twitter.com/lzyTV0AaGE

Huber also made an odd Facebook post on February 14, in which he claimed the president called him. He wrote, “I Guess Our Great President knows how much I Love Him, and Support Him every Second! I Thought it was my Boss Tommy Connor calling me, nope Just Our Smart Leader giving me a Call!”

He was at Trump’s golf club in Palm Beach on February 11.

Bizarrely, though, he also posted from the White House on February 11 at basically the same time.

3. Huber Arrived at the Melbourne Rally at 4 in the Morning & Was First in Line

Gene Huber, first in line at Trump's rally on Melbourne, Florida. 13 hours ahead of time. pic.twitter.com/bJxH6x014K

Huber spoke to the media before the rally and explained that he was first in line.

Here’s another photo he posted of himself with the Trump cut out, this time on Facebook:

On Facebook, Huber has posted that he is co-owner of a car franchise in Bethpage, New York.

Huber has a Twitter page at @Squeakey6. His profile reads, “Donald J Trump, changed America!” On CNN, Huber said he likes Trump because “he speaks the truth” and he “speaks from his heart.”

“There’s never been a movement like this ever,” he said. “I’ve never been into politics in my life until President Trump.”

In fact, his page is basically an homage or shrine to Trump. He doesn’t post about much else.

His page is so Super fannish that he once ran a program that revealed he uses the words President Trump the most of any on social media.

On Facebook, Huber says he went to Connetquot High School, lives in Boynton Beach, Florida, is married, and is from Ronkonkoma, New York. He’s also posted photos on social media of his wife and young son.

5. Huber Streamed His Own Videos From the Melbourne Rally on Facebook

Huber posted several behind-the-scenes moments at the Melbourne rally on his Facebook page.

Huber has dressed up in Trump garb before.

Trump had a week of bad headlines before heading into his comfort zone – a campaign style rally. He would probably disagree, though, as he has blamed the news media and denied that his White House is in chaos.

However, he dealt with a series of developments, such as his choice for national security adviser bowing out in the wake of the resignation of Michael Flynn amid questions about Flynn’s conversation with the Russian ambassador.

Trump also gave a lengthy news conference in which he bashed the news media and later declared on Twitter that the media are the “enemy” of the American people, a remark that was hotly criticized. 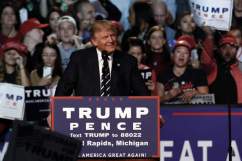 Loading more stories
wpDiscuz
25
0
Would love your thoughts, please comment.x
()
x
| Reply
Gene Huber is the man Donald Trump invited on stage at his Melbourne, Florida, rally, declaring "a star is born." Learn about the supporter, whose Twitter page is an ode to Trump. Was he a staged plant?