Early on during his speech at CPAC 2017, President Donald Trump accused the “fake news” media of making up sources and calling it the “enemy of the people.” He stood by that phrase, first used in a tweet on February 17, claiming that he’s only referring to the “fake news” media, not all of the media.

Trump also referred to a story he saw where nine sources were credited, but he said these sources were made up. “There are no nine people,” Trump said. “I don’t believe there was one or two people. Nine people? And I said, ‘Give me a break,’ because I know the people. “I know who they talk to. There were no nine people.”

Trump was specifically referring to The Washington Post’s February 9 report that former National Security Adviser Michael Flynn did talk with the Russian ambassador about sanctions before Trump’s inauguration. “Nine current and former officials, who were in senior positions at multiple agencies at the time of the calls, spoke on the condition of anonymity to discuss intelligence matters,” the Post reported.

Flynn later resigned, but not because of his phone call with the ambassador. Instead, it was because he lied to Vice President Mike Pence about it. In his February 16 press conference, Trump said he didn’t think Flynn did anything wrong, other than misleading his vice president.

Trump also didn’t like the media’s reporting of his “enemy of the people” tweet, in which he referred to the news organizations of all thee major broadcast networks, plus CNN and The New York Times, as “fake news.” 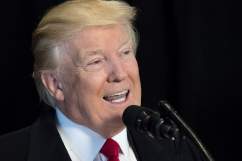 Loading more stories
wpDiscuz
22
0
Would love your thoughts, please comment.x
()
x
| Reply
Early on in his CPAC speech, President Donald Trump accused the "fake news" media of making up sources for its reporting.