During an interview with Today Show anchor Matt Lauer, President George W. Bush gave his thoughts on President Donald Trump‘s policies and said that there should be an investigation into the new president’s alleged ties to Russia.

Lauer asked Bush if he ever considered the media the “enemy of the people” like Trump does. Bush chuckled, then explained why he thinks the press is an integral part of American democracy.

“I consider the media to be indispensable to democracy. We needed the media to hold people like me to account,” Bush told Lauer. “Power can be very addictive and it can be corrosive, and it’s important for the media to call to account people who abuse their power.”

Bush then said he tried to convince Russian President Vladimir Putin how valuable a free press is. “It’s kind of hard to tell others to have an independent free press when we’re not willing to have one ourselves,” Bush said.

This led to Lauer asking about Russia and the reports that people within the Trump campaign had communication with Russian officials during the campaign. A day after Republican House Rep. Darrell Issa said he would like to see a special prosecutor handle an investigation, Bush said we “need answers.”

“I think we all need answers,” Bush replied. “Whether or not the special prosecutor’s the right way to go or not, you’re talking to the wrong guy. I have great faith in Richard Butt for example. He’s the head of the Senate Intelligence Committee, really good buy, and an independent thinker. And if he were to recommend a special persecutor then it’d have a lot more credibility with me.”

Bush was on Today to also promote his new book, Portraits of Courage, which features portraits he has painted of veterans from the wars in Iraq and Afghanistan. Many of the veterans featured in the book were on hand at Today. Bush’s wife, former First Lady Laura Bush, wrote the foreward.

Since leaving office, Bush has taken up painting and has supported veterans from the wars started during his administration. His daughter, Jenna Bush Hager, is also a Today contributor. 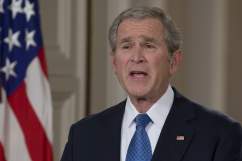