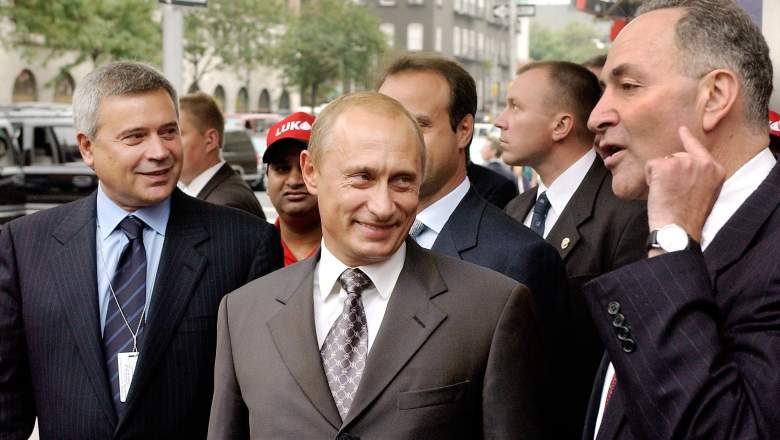 In response to Senate Minority Leader Chuck Schumer’s call for an independent and nonpartisan investigation into the Donald Trump Administration’s possible ties to the Russian government, the president has called for an investigation into Schumer’s own relationship with Russia. Trump tweeted out an old photo of Schumer eating a doughnut with Russian President Vladimir Putin from 2003 after it began circulating on conservative websites.

In his tweet, the president called Schumer a “total hypocrite.”

We should start an immediate investigation into @SenSchumer and his ties to Russia and Putin. A total hypocrite! pic.twitter.com/Ik3yqjHzsA

Schumer then quickly responded, saying that he would happily talk about his contact with Putin under oath.

Happily talk re: my contact w Mr. Putin & his associates, took place in '03 in full view of press & public under oath. Would you &your team? https://t.co/yXgw3U8tmQ

And for the record, they were Krispy Kreme donuts.

The photo has been posted on other conservative sites. It appeared on The Truth Division, Drudge Report and The Gateway Pundit. Trump staffer Dan Scavino also tweeted it directly at Schumer.

.@SenSchumer– do it over a donut and coffee. pic.twitter.com/BvnYukwtXs

The photo originates from September 2003, when Putin visited New York to celebrate the first Lukoil gas station opening in the U.S. after it bought Getty Petroleum in 2000 and began re-branding Getty stations. According to press reports at the time, Putin did not make any public remarks and was only at the gas station convenient store for 10 minutes. That was long enough for Schumer to give Putin a Krispy Kreme doughnut. Lukoil President Vagit Alekperov was also at the meeting.

“When I showed the president of Russia a Krispy Kreme doughnut and he ate it and said it was good, that was one of the more surreal moments I’ve had in politics,” Schumer said at the time.

After Putin left the scene, Schumer told reporters that it was good for the U.S. to have a gas station owned by a company based in a non-OPEC country. “The more competition there is in oil, particularly against OPEC, the better New York will do and the better America will do,” Schumer said.

Schumer also wrote a 2008 Wall Street Journal op-ed, in which he said Russia needed to take a big role in talks with Iran during the George W. Bush administration.

The back-and-forth between the president and Schumer came just a day after Attorney General Jeff Sessions agreed to recuse himself from any potential investigation into Russian ties with the Trump campaign and the election, if one was to happen.

Sessions was criticized for not telling the Senate Judiciary Committee during his confirmation hearings that he met with Russian Ambassador Sergey Kislyak twice in 2016, before the election. The White House also confirmed to the New York Times that Trump’s son-in-law and adviser Jared Kushner and Michael Flynn met with the ambassador in a Trump Tower meeting. Flynn was Trump’s first National Security Adviser, but resigned after it was reported that he lied to Vice President Mike Pence about his communication with Kislyak before the inauguration.

During his press conference on March 2, Schumer argued that it wasn’t enough for Sessions to just recuse himself. Schumer said Sessions should resign from his post as attorney general. He called on the Trump administration to agree on the creation of an independent counsel to investigate.

I hereby demand a second investigation, after Schumer, of Pelosi for her close ties to Russia, and lying about it. https://t.co/qCDljfF3wN