While on his way to Mar-A-Lago, President Donald Trump told reporters on Thursday he thinks “something should happen” to Syrian President Bashar Al-Assad. His comments came two days after a deadly chemical attack in a rebel-controlled province of Syria killed an estimated 100 people.

After arriving in Florida, Trump will meet with his national security team, a White House official told CNN. He will also meet with Defense Secretary James Mattis to discuss options for his Syria policy moving forward, including potential military action.

In his response to the attack, Tillerson said the U.S. will have a “serious response,” Fox News reports. He said “steps are underway” to build an international coalition that will put pressure on Assad, adding that the recent attack “violates all previous U.N. resolutions, violates international norms and long-held agreements.”

The White House officially blamed Assad’s regime for the attack on April 4, condemning the attack and criticizing President Barack Obama for not doing more in Syria. “These heinous actions by the Bashar al-Assad regime are a consequence of the past administration’s weakness and irresolution. President Obama said in 2012 that he would establish a ‘red line’ against the use of chemical weapons and then did nothing,” the White House said.

According to the New York Times, the Turkish Health Agency said the Assad regime used a banned nerve agent called sarin in the attack. At least 86 people, including 28 children, were killed, according to the health department for Idlib Province, a region controlled by rebels trying to topple Assad. President Recep Tayyip Erdogan of Turkey and other officials have estimated that over 100 people died in the attack. 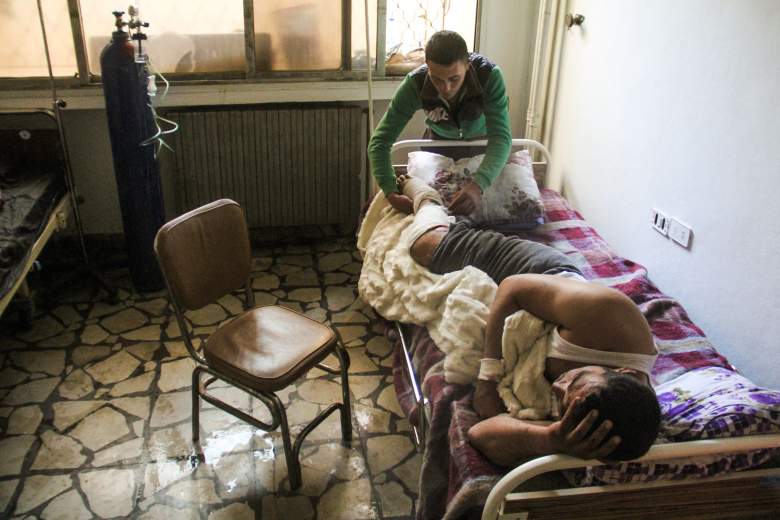 Hassan Youssef, 40, receives treatment after the attack on Idlib on April 4. (Getty)

UNICEF estimates that 546 others, including many children, were injured in the attack.

Assad has denied responsibility for the attack. The Independent reports that Russia, an Assad ally, claims that Syrian jets hit a rebel-controlled weapons facility.

As The Times notes, Russian officials claim that there are insurgents making chemical weapons in the facility that was hit, however, there isn’t evidence showing that such a weapons facility existed where the strike happened. Instead, witnesses said that one early morning strike hit a clinic.