Getty The Stonewall Jackson statue that was removed in Baltimore, Maryland.

Trump did not specifically use the word Confederate in his tweet, but it came amidst news of more Confederate statues and monuments coming down throughout the U.S., making it clear what he meant. The Charlottesville protests were focused on the planned removal of the Robert E. Lee statue there. Confederate General Stonewall Jackson was trending on Twitter when Trump’s tweet flew in because of efforts to remove honors to Jackson in New York, Baltimore and other places.

“Sad to see the history and culture of our great country being ripped apart with the removal of our beautiful statues and monuments. You can’t change history, but you can learn from it. Robert E Lee, Stonewall Jackson – who’s next, Washington, Jefferson? So foolish!” Trump tweeted. “The beauty that is being taken out of our cities, towns and parks will be greatly missed and never able to be comparably replaced!”

Here are the actual Trump tweets:

Sad to see the history and culture of our great country being ripped apart with the removal of our beautiful statues and monuments. You…..

…can't change history, but you can learn from it. Robert E Lee, Stonewall Jackson – who's next, Washington, Jefferson? So foolish! Also…

…the beauty that is being taken out of our cities, towns and parks will be greatly missed and never able to be comparably replaced!

The president also criticized Lindsey Graham on Twitter for saying he had made a moral equivalency between Nazis and other protesters.

Publicity seeking Lindsey Graham falsely stated that I said there is moral equivalency between the KKK, neo-Nazis & white supremacists……

…and people like Ms. Heyer. Such a disgusting lie. He just can't forget his election trouncing.The people of South Carolina will remember!

The Trump remarks were somewhat a reiteration of the comments that the president made in a dramatic and much-discussed press conference in which he defended his decision to condemn violence on “many sides” in the initial response to the Charlottesville car ramming attack that killed paralegal Heather Heyer, a counter protester. Trump later condemned white supremacists but was criticized for not calling them out immediately and for saying that there were good and bad people on both sides of the Charlottesville clashes. (James Alex Fields, an accused Hitler admirer, was charged in the murder of Heyer, and videos and photos showed Neo Nazis marching through the streets with torches.)

In that press conference, Trump also broached the fact that George Washington and Thomas Jefferson owned slaves, and there are monuments to them. However, the president doubled down on August 17, taking it one step farther by dubbing the statues “beautiful” and removing them “foolish.”

GettyA statue of Stonewall Jackson atop his horse looks over Henry Hill at the battlefields of Manassas, or Bull Run as it was generally known in the North July 5, 2005 in Manassas, Virginia.

Meanwhile, on August 17, statue removals focused on Lee but also Jackson as some officials rushed to get rid of them.

On August 16, statues of Robert E. Lee and Stonewall Jackson were removed from public parks in Baltimore, Maryland.

Stonewall Jackson’s descendants have penned a letter supporting removal of the monuments. Jack and Warren Christian penned the open letter asking for the removal of the statues in Richmond, Virginia.

“As two of the closest living relatives to Stonewall, we are writing today to ask for the removal of his statue, as well as the removal of all Confederate statues from Monument Avenue. They are overt symbols of racism and white supremacy, and the time is long overdue for them to depart from public display. Overnight, Baltimore has seen fit to take this action. Richmond should, too,” they wrote.

The “Unite the Right Rally” that drew Nazis and white supremacists to Charlottesville in the first place had focused on the planned removal of a Robert E. Lee statue in that city’s park. 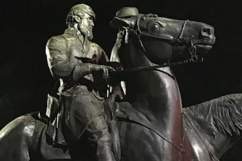