Michael Hamill, one of the so-called “hot Gainesville cops” is getting new, negative attention after it was revealed the department received a complaint that his Facebook page allegedly contained anti-Semitic posts.

Police now say that Hamill has been suspended with pay while the complaint is investigated, which has caused another firestorm on the Gainesville Police Department’s Facebook page.

According to The Gainesville Sun, screenshots from what is purportedly Hamill’s personal Facebook page showed years-old jokes about Jews and Hitler. Hamill was the officer with the beard in the middle of the viral selfie. The three officers in the selfie were Hamill, Dan Rengering and John Nordman.

Their selfie during Hurricane Irma sparked talk of a fundraising calendar and provoked a slew of women to head to the Gainesville PD’s Facebook page to gush over the officers’ good looks.

1. The Posts Allegedly Include a Joke About Putting People in Ovens ‘The Hitler Way’

You may want to reconsider having Michael Hamill as the face of your department, no? pic.twitter.com/rFcXBbxY8b

The Gainesville Sun reported that it had obtained screenshots that form the basis for the complaint against Hamill, who is now 28. They are purportedly from his personal Facebook page, according to The Sun.

The first post, the Sun reported, is from 2013, and reads: “Who knew that reading jewish jokes before I go to bed would not only make me feel better about myself but also help me to sleep better as well. Here is one for everybody, ‘What’s the difference between boy scouts and jews?’ Anybody know? Well it is because ‘Boy scouts come back from their camps.’”

The newspaper reported that a person replied to that Facebook post, calling it “messed up.” Hamill’s page replied, “u don’t like it? don’t read it then,” Gainesville Sun reported.

A 2011 post, according to The Sun, reads: “so I find it funny that people will talk about how our government needs to do something about our economy and in reality it’s YOU who needs to stop taking advantage of our system and get a life and do something with your life. Gotta love reality when it hits you in the face. Stupid people annoy me. Put them in an oven and deal with them the Hitler way. Haha.” Hamill’s Facebook page no longer comes up. 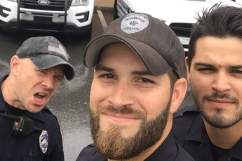 2. Police Confirmed That They Received a Complaint Against Hamill

The Police Department spokesman told The Gainesville Sun that the department had received a complaint against Hamill and was reviewing it, but they said it all remains confidential while it’s being investigated.

On their Facebook page, the police wrote: “Several citizens have brought information to our attention regarding a complaint against Officer Hamill. GPD is reviewing the allegation and will do so in accordance to Florida law and department policy. Under Florida Law, complaint information is confidential until an investigation is concluded. The Gainesville Police Department prides itself with our philosophy and mission of compassion, inclusion, and respect and will fully review the matter.”

Later in the day on September 15, the police added a few twists to the statement, revealing that Hamill was suspended with pay, “Several citizens have brought information to our attention regarding complaints against Officer Michael Hamill. GPD takes these allegations extremely seriously. GPD is reviewing the allegations and will do so in accordance to Florida law and department policy. Under Florida Law, complaint information is confidential until an investigation is concluded. Officer Hamill has been suspended with pay. The Gainesville Police Department prides itself with our philosophy and mission of compassion, inclusion, and respect and will fully review the matter.”

That post and the other filled up immediately with comments, with some people defending the officer, in part because his posts were made before he became one, and others expressing outrage over the post. In about 30 minutes, almost 900 comments had been made on the post.

As a sampling, one woman wrote: “Part of me is floored by the number of women who are excusing the hateful, anti-semitic things he said, according to the screenshots. Instead of putting blame on the person who found it and came forward, maybe you could place responsibility on the person who said it.”

However, another opined, “This is absolutely insane. Let’s take a hard working officer of the law off the streets (not to mention serving during a time of much need) bc someone is insane. I wish people realized what they were doing when making these complaints. Shame on whomever these “citizens” are. Let’s go find every single piece of dirt on you since your birth and judge you for it?”

And another person said that, since the posts were made years ago when he was in his early 20s, maybe Hamill has changed. “Some of our best officers are those who were rotten teenagers, changed for the better and decided to serve and protect. Are we trying to send a message saying you’re only allowed to be a LEO if you have a perfect past?! If that’s the case we would have no police officers.”

‘I’ve never had this much attention.' Meet the Florida 'hot cops' who are going viral https://t.co/AdBiRF08yd

Women filled the Gainesville Police Department’s Facebook page with glowing comments about the looks of the three officers when the selfie first went viral. The post was shared more than 240,000 times and had more than 150,000 comments, but, since the controversy emerged over Hamill, the police have deleted it.

Police explained on their Facebook page, “The viral post has been removed due to numerous complaints and an ongoing internal review. A statement can be found on GPD’s website. Folks wishing to donate to local Hurricane Irma victims can still do so at the link below.” The police then provided this link.

Until the complaint emerged, Gainesville police were enjoying the attention, writing:

“UPDATE:
1. We are dying with the comments. You’ve actually made our chief blush with some of them.
2. MRS. Nordman and MRS. Hamill have also enjoyed knowing how millions of women are going crazy over their husbands.
3. We can confirm that Officer Rengering (far right with the amazing hair) IS SINGLE.
4. On another note, Officer Rengering is being placed into Cougar Prey Protective Care, similar to the witness protection program for his safety.
5. Please do not call 9-1-1 and request this group respond to your “incident”
6. There WILL be a calendar.

Thank you all for the hilarious comments…they have brightened our time up here. As for the calendar, we are going to try and do something fairly quickly and funds raised will go to Hurricane Irma recovery here in Florida.”

4. Hamill Is Married & Hasn’t Been a Police Officer for Long

Of the three so-called hot cops, two of them, including Hamill, are married, the police said previously.

Hamill has been a Gainesville police officer since 2016. According to People Magazine, after the viral selfie, lots of women wrote on the Facebook post, calling the men “hunkapotumuses” and “making mention of calling 911 to ask specifically for them.”

Before the latest controversy, Hamill told Time Magazine of the selfie hype, “I’ve never had this much attention before. It’s an ego boost — very flattering and funny.” He’s only been married since March.

Before the controversy, Hamill told The Gainesville Sun that he and the other officers were “humbled” by the attention but said his wife didn’t like it at first, adding, “now she’s come around to it and realized there’s nothing she can do about it.”

5. It’s Not Clear Whether the Fundraising Calendar Will Still Occur

We went to help @NorthPortPolice & @CityofNorthPort w/ rescues due to rising floodwaters from #Irma. @GainesvillePD has nothing on us?? pic.twitter.com/BtfeTFQWsr

After the selfie photo went viral, the Gainesville police indicated they were considering making a fundraising calendar with the men. It’s not yet clear whether the calendar will go forward even without Hamill in it.

As the Sarasota PD proved above, there are still plenty of hot cops in Florida. In fact, it seemed like every police department in the country was getting into the “hot cop” game:

Seriously, who needs #HotCops when you have #HotDogs? ?#WoofWoof #Denver pic.twitter.com/SQc2bnOL6R

For Gainesville and Hamill, though, the attention has now taken a new, negative twist.

Read More
5 Fast Facts, Breaking News, Florida, Police
Michael Hamill, one of the so-called "hot Gainesville cops" in a viral selfie, is subject of a complaint that says the police officer's Facebook page had anti-Semitic posts.