Stephen Bannon is scheduled to appear on CBS’ 60 Minutes on Sunday night. In the previews of the one-on-one interview with Charlie Rose, one of President Trump’s earliest supporters shares his thoughts on Catholicism, DACA and how he’s been treated by the media.

Bannon has been at odds with the pope previously, but he appears to take things up a notch with an overt statement that the church is in favor of DACA because it needs to fill up the church pews, according to The Washington Post. Before Bannon’s interview with Rose even aired, comedian and the Late Night Show host Stephen Colbert addressed Bannon’s shot at the Catholic church.

In light of Bannon’s first major interview after leaving the White House, here are several things you know about Bannon’s religious views as he re-inserts himself into the national spotlight again:

1. Bannon Suggests New York-based Cardinal Timothy Dolan Has Been ‘Terrible’ In Supporting DACA and Stated ‘They Need Illegal Aliens to Fill the Churches.

Bannon, who himself is Catholic, suggested that the Cardinal Dolan’s motivation to opposed Trump’s move to end DACA is due to “economic interest” and their self-preservation. In the interview with Rose, Bannon said:

The bishops have been terrible about this. By the way, you know why? You know why? Because [they have been] unable to really — to — to — to come to grips with the problems in the church, they need illegal aliens, they need illegal aliens to fill the churches. That’s — it’s obvious on the face of it. That’s what — the entire Catholic bishops condemn him. … They have — they have an economic interest. They have an economic interest in unlimited immigration, unlimited illegal immigration.

Later in the interview, Bannon clarified that he still respected the Catholic church leaders, but didn’t think that supporting DACA was “about doctrine” of the church. “This is about the sovereignty of a nation,” he said. “And in that regard, they’re just another guy with an opinion.”

Dolan, appointed Archbishop of New York by Pope Francis, called Bannon’s words “preposterous and rather insulting,” according to BBC. Further, Dolan said support of DACA was an “issue of Catholic doctrine but a Biblical one.”

“The Bible is so clear, so clear, that to treat the immigrant with dignity and respect, to make sure that society is just in its treatment of the immigrant is Biblical mandate.”

At the expense of Bannon, Colbert unleashed his brand of humor towards Trump’s former advisor, who in the 60 Minutes dubs himself Trump’s ‘wingman.’

3. Bannon Was Accused of Anti-Semitism By His Ex-Wife But the Anti-Defamation League Said It Wasn’t ‘Aware of Any Anti-Semitic Statements’ From Bannon.

In the midst of his turbulent divorce from his second wife, Bannon was accused of making anti-Semitic statements.

As Heavy previously reported, Bannon ex-wife Mary Louise Pickard alleged in court documents that Bannon “had objected to sending their twin daughters to an elite Los Angeles academy because he ‘didn’t want the girls going to school with Jews.”

The ADL acknowledged that Bannon’s involvement at Breitbart meant he helped advance “a wide range of bigotry.” Additionally, “there’s some controversy … from Mr. Bannon’s divorce proceedings in 2007.” However, the organization went on to say it was “not aware of any anti-Semitic statements made by Bannon himself.”

Jewish employees at Breitbart also backed Bannon and some even pointed out that Breitbart Jerusalem was started during his first tenure at the conservative media outlet.

4. From Childhood Spent in Catholic School Through Graduate School at Georgetown University, Bannon Describes Himself as Having ‘Blue-Collar, Irish Catholic’ Foundation. 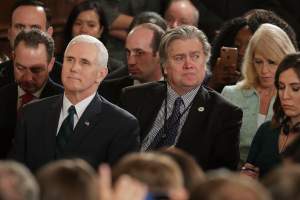 5. During a 2014 Vatican Conference That He Participated In Via Skype, Bannon Discussed His Views On ‘Judeo-Christian West’ Being Endangered By Islam And the Left. 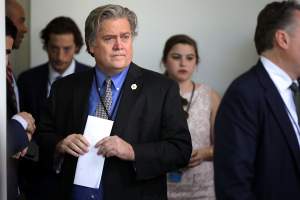 Despite his Catholic roots, politics have led Bannon to lash out at certain views and individuals, including Speaker of the House Paul Ryan, whose “social-justice Catholicism” wasn’t enough nationalist for Bannon.

According to Think Progress, in a summer 2014 speech at the Vatican conference on poverty held by a conservative religious group that sought to promote the Catholic values to be further implemented in the “public square,” Bannon issued out an all-out religion-steeped battle cry.

“We’re at the very beginning stages of a very brutal and bloody conflict, of which if the people in this room, the people in the church, do not bind together and really form what I feel is an aspect of the church militant, to really be able to not just stand with our beliefs, but to fight for our beliefs against this new barbarity that’s starting, that will completely eradicate everything that we’ve been bequeathed over the last 2,000, 2,500 years.”

Read More
Donald Trump, Immigration, Politics
wpDiscuz
1
0
Would love your thoughts, please comment.x
()
x
| Reply
Stephen Bannon is scheduled to appear on CBS' 60 Minutes on Sunday night. In the previews of the one-on-one interview with Charlie Rose, one of President Trump's earliest supporters shares his thoughts on Catholicism, DACA and how he's been treated by the media.