It’s possible that Las Vegas mass murderer Stephen Paddock was considering targeting the “Life is Beautiful” concert with Lorde and Chance the Rapper instead of the country music festival where he eventually struck, according to The Daily Beast and comments made by the Las Vegas sheriff.

Blink-182 was among the acts performing at that venue.

The sheriff, Joe Lombardo, was asked at a news conference if it’s believed that Paddock was scouting other locations in Las Vegas, and he said “what’s possibly been presented with Life is Beautiful.” You can read more about the Life is Beautiful 2017 Las Vegas music event here.

As to the room’s rental, though: “This has been confirmed. The reasons that ran through Paddock’s mind are unknown, but it was directly during the same time as Life is Beautiful,” he said. Authorities recovered “items” and video from that location. They’re reviewing them to determine his actions while there. He booked the room through Airbnb, according to the sheriff.

“We have information that he may have attended ‘Life is Beautiful,’ but we haven’t confirmed it yet,” the sheriff said.

A senior law enforcement source whom Daily Beast did not identify told the publication that Paddock, 64, of Mesquite, Nevada, “might have originally targeted another Las Vegas music festival held the previous weekend.”

Paddock “rented multiple condos overlooking the annual Life Is Beautiful Festival, which this year was headlined by Lorde and Chance the Rapper,” Daily Beast reported, adding that it was possible that Paddock had “lost his nerve.”

Instead, he ended up checking into the Mandalay Bay Hotel on September 28, a few days before the shooting, obtaining a room on the 32nd floor that overlooked the area where the Route 91 Harvest Festival, an event showcasing country music, was being held. Paddock then began firing at the thousands of people gathered below who were watching Jason Aldean sing; he killed at least 59 people and injured at least 524. The motive of the retired accountant remains unclear. He had a cache of firearms in the hotel and in his house.

FacebookSome of the shooting victims.

The ‘Life is Beautiful’ festival “was held in Las Vegas just over a week ago” and “had a line-up including Blink-182, Chance the Rapper and Lorde.”

You can learn more about each victim here: 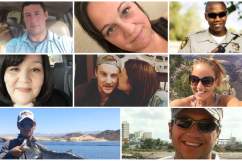