President Donald Trump tweeted that he asked Vice President Mike Pence to leave Lucas Oil Stadium early if any NFL players kneeled during the National Anthem. Pence did just that, leaving the game early because he would not “dignify any event that disrespects our soldiers, our Flag, or our National Anthem.”

I asked @VP Pence to leave stadium if any players kneeled, disrespecting our country. I am proud of him and @SecondLady Karen.

“I asked @VP Pence to leave stadium if any players kneeled, disrespecting our country. I am proud of him and @SecondLady Karen,” Trump tweeted moments after Pence tweeted his own explanation for leaving the game.

Pence was in Indianapolis to watch his home-state Colts play the San Francisco 49ers. But after seeing 49ers players kneeling during the anthem, Pence and Second Lady Karen Pence got up and left.

I stand with @POTUS Trump, I stand with our soldiers, and I will always stand for our Flag and our National Anthem. pic.twitter.com/B0zP5M41MQ

“At a time when so many Americans are inspiring our nation with their courage, resolve, and resilience… now, more than ever, we should rally around our Flag and everything that unites us…While everyone is entitled to their own opinions, I don’t think it’s too much to ask NFL players to respect the Flag and our National Anthem,” Pence wrote on Twitter.

Members of the media following Pence noted that they were told Pence might leave the game early before it started though. NBC News’ Vaughn Hillyard tweeted that the media pool was kept in vans and was not allowed to follow Pence into the stadium. “As media pool has been made aware, a staffer told pool that VPOTUS may depart the game early. Did not indicate how early,” Hillyard reported.

Hillyard also tweeted that Pence’s staff offered no further details about the phone call Trump claims to have had with Pence before the game.

“Asked about whether this happened, top Pence aide referred back to the president’s tweet. The VP’s staff is giving no additional comment beyond tweeted statements,” Hillyard wrote.

Asked about whether this happened, top Pence aide referred back to the president's tweet. The VP's staff is giving no additional comment beyond tweeted statements. https://t.co/pCFlrHWFKs

The Mercury News reported on Saturday that Pence is scheduled to arrive in Los Angeles for a private fundraising event at 6:30 p.m. in Los Angeles tonight.

The incident comes two weeks after Trump’s comments during an Alabama rally on September 22. That night, he called on NFL owners to fire any “son of a bitch” who kneels during “The Star-Spangled Banner.” NFL owners responded with statements denouncing the President’s remarks and joined their players in protesting. Cowboys owner Jerry Jones even kneeled with their players. Since then, most players have returned to standing for the National Anthem, although over a dozen Niners players protested today. 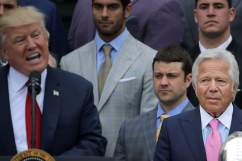