An Idaho high school basketball coach and teacher’s assistant has been accused of sexual battery on a minor, police say.

Ann Kuroki, 26, was arrested by the Gooding Police Department on charges of sexual battery against a child 16 or 17 years of age, KMVT-TV reports.

Kuroki, who worked at Gooding High School, has been fired by the Idaho city’s school district after her arrest, the news station reports. Gooding is located about 100 miles southeast of Boise.

“Our first concern in the Gooding School District is for students and their safety,” Superintendent Spencer Larsen told the Twins Falls Times-News. “When we got information, we acted upon it.”

1. Kuroki Went to the Boy’s House to Confess to the Victim’s Mother, Police Say

The Gooding Police Department began an investigation Wednesday after learning that Ann Kuroki “could be having a relationship with a male student,” KMVT-TV reports. Gooding Police Chief Dave Fisher said the school district fired Kuroki Thursday morning and has launched its own internal investigation.

The incidents took place between November 2017 and January 2018, KIVI-TV reports.

According to an affidavit obtained by the news station, the investigating detective wrote, “I asked Kuroki to estimate the number of times she and (the victim) were physically intimate with each other, to include kissing, and she said about fifteen times. Kuroki told me that every time (the victim) came over to her house, it was generally on a Saturday night. … Kuroki admitted that she had sexual intercourse with (the victim) at least five times and she had also bought alcohol for (him).”

According to the Times-News, police said in the court documents that the victim initially denied going to Kuroki’s house and said they had not been involved in a “sexual relationship.”

Police then obtained a search warrant for Kuroki’s house on Friday and seized three cell phones, bedding and a card with a handwritten note she had been given by the victim, the newspaper reports. The victim’s mother then told police that Kuroki had come to her house to talk about what happened.

“I have Ann with me and I am taking her to the station. She’s going to confess,” the mother texted police. Kuroki and the mother then went to the police station.

During questioning, Kuroki said she began talking with the victim over the summer when she received a “kind of flirty” message from him in July after she posted a photo on Instagram, according to court documents. When school started in August she began talking to him and what started as a typical teacher-student relationship changed when they began communicating via Google Docs as she helped edit his senior paper, Kuroki told police.

In November, Kuroki said “she started breaking down with her resolve to keep things professional with (the boy),” the detective said in the affidavit. “Kuroki stated she was nicer to him, she did not send him to the office nearly as much and they started talking more. Kuroki told me their messages became a lot flirtier.”

Police said after a night of “boozing” pretty heavy at a bar, she sent him an Instagram message and he picked her up there. They then drovea round before he took her home in an left.

She told police she was “boozing” pretty heavy one night when the boy sent her an Instagram message. She asked him to pick her up from the Sidetrack Bar.

She said they drove around for a while, and then he took her home and left. Kuroki said at school the next week things felt different and “she knew what had happened was wrong but at that point she was already ‘Two feet in,'” the Times-News reports.

Kuroki initially said she didn’t “have sex” with the boy, according to police, but said they were “messing around,” including “sexual touching,” at her house. She later confessed to police that she “had sex with the boy six times at her house,” the Times-News reports.

“Kuroki told me she had second thoughts about their relationship at this time and she broke up with him,” the detective wrote in the affidavit. Kuroki said the boy wrote her a note saying he loved her and Kuroki told police it killed her to know she “wrecked him,” according to the Times-News.

Police said rumors began to circulate about Kuroki in the student after Christmas break, but she lied when questioned by school officials. She then met with the boy’s mother and confessed what happened to her. The boy’s mother recorded the conversation and gave it to police, according to court documents, which led Kuroki to admit more details about the case, police said. 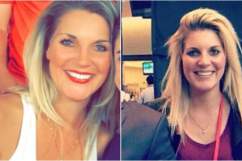 2. Kuroki, Who Told Police ‘Part of Her Just Wanted to See if We Could Catch Her,’ Faces Up to Life in Prison if Convicted

The investigating detective wrote in an affidavit that “Kuroki told me a part of her just wanted to see if we could catch her,” KIVI-TV reports.

Kuroki appeared in court Monday for her arraignment and remains in custody. She has been charged with six felony counts of sexual battery of a minor and two misdemanor counts of dispensing alcohol to a minor, the news station reports.

She could face either up to 25 years in prison or up to life in prison, depending on the classification of the sexual battery charge against her.

According to Idaho state law, sexual battery of a minor child 16 or 17 years of age is a felony “for any person at least five (years of age older than a minor child who is sixteen or seventeen years of age, who, with the intent of arousing, appealing to or gratifying the lust, passion, or sexual desires of such person, minor child, or third party,” to

It is not clear if Kuroki has hired an attorney and she could not be reached for comment while in jail.

3. She Was Hired by the School District to Be the Boys JV Basketball Coach in October & Also Worked as a Paraprofessional

Ann Kuroki moved to Idaho in early 2017, according to her Instagram, which has now been made private. She had been living in California.

“Moving here 6 months ago has been the most mentally challenging transition I’ve had to make coming from a completely different life/lifestyle in California. But the lessons I’ve learned and blessings I’ve received let me know that I’m right where I’m supposed to be; no matter how temporary. S/O to this this dime for being my biggest supporter and rock no homo. Love you long time,” she wrote in an Instagram caption, referencing an Idaho friend.

Kuroki was hired by the school district as Gooding High School’s boys JV basketball coach in October, according to a school board agenda.

On her Linkedin profile, Kuroki also said she worked a a paraprofessional for the school district, describing her job as “IDLA Site Coordinator at Gooding High School.” IDLA is the Idaho Digital Learning Academy, which, “provides innovative education methods through digital learning, creating access and opportunity for all Idaho students and educators.” The school district said she oversaw the computer learning lab.

Kuroki grew up in Hershey, Nebraska, according to her Facebook profile. She has no previous criminal record.

She played college basketball at Southern Virginia University, a “private liberal arts college dedicated to educating Latter-day Saints and those with similar standards and ideals,” according to the school’s website. Kuroki was also on the women’s tennis team at the Division III school. The school is not affiliated with the Mormon church, but its student body is predominately caters to LDS students, according to the Deseret News.

Kuroki began studying at Southern Virginia in 2012 and graduated in 2015 with a degree in general studies and humanities. She previously spent two years at Bellevue University, studying behavioral sciences and earned an associate’s degree in psychology in 2012 at Mid-Plains community College, where she also played basketball, according to her Linkedin profile.

5. She Has Worked Several Jobs in Multiple States, Including as a Live-in Nanny, Bartender, Receptionist & Sales Manager

Kuroki has lived in several states, including Nebraska, Virginia, Nevada, Texas, Oklahoma, California and now Idaho, according to her Instagram. Before moving to Idaho, Kuroki was living in Sunnyvale, California, and working as a sales manager at Vivint Solar, according to her Linkedin page.

She previously worked as a receptionist in Houston, a live-in nanny in Las Vegas and asa bartender/server in Nebraska.

Kuroki also touts her volunteer experience on her Linkedin profile, including time as a jury member in teen court, work at Goodwill, at an animal shelter, as a kids’ basketball coach, referee and scorekeeper and as a “mentor for Autistic and Down Syndrome children.”

Editor’s Note: An earlier version of this report stated that Southern Virginia University is a Mormon-affiliated school. The university is not affiliated with the Church of Latter Day Saints.

Loading more stories
wpDiscuz
0
0
Would love your thoughts, please comment.x
()
x
| Reply
Ann Kuroki, who was hired as a boys basketball coach at Gooding High School in Gooding, Idaho, last fall, has been charged with felony sexual battery of a minor.