Not long after the magazine story was killed, Stormy Daniels says she was threatened by a man who approached her in Las Vegas. “A guy walked up on me and said to me, ‘leave Trump alone. Forget the story.’” pic.twitter.com/JMskKQiYCi

Daniels, 39, says she had an affair with Trump in 2006. In May 2011, Daniels agreed to talk about her experience with Trump in an interview with a sister publication of In Touch magazine, she told “60 Minutes.” Daniels said she was going to be paid $15,000 for the interview. According to Daniels, the magazine called Trump for comment before publishing and his attorney, Michael Cohen, threatened to sue. The interview was never published.

Daniels told Cooper that she was threatened in a parking lot in Las Vegas a few weeks later.

“I was in a parking lot, going to a fitness class with my infant daughter. T– taking, you know, the seats facing backwards in the backseat, diaper bag, you know, gettin’ all the stuff out,” she said during her “60 Minutes” interview. “And a guy walked up on me and said to me, ‘Leave Trump alone. Forget the story.’ And then he leaned around and looked at my daughter and said, ‘That’s a beautiful little girl. It’d be a shame if something happened to her mom.’ And then he was gone.”

Cooper asked Daniels if she saw that as a threat.

Daniels added, “I was rattled. I remember going into the workout class. And my hands are shaking so much, I was afraid I was gonna– drop her.”

She told “60 Minutes” that she never saw the man again.

“No. But I– if I did, I would know it right away,” she said. “100 percent Even now, all these years later. If he walked in this door right now, I would instantly know.”

Daniels told Cooper she did not go to the police because she was “scared.” She also denied the affair when a gossip website reported the affair a few weeks later, according to “60 Minutes.”

After the interview aired, Daniels’ attorney tweeted, “There can be no question where this threat came from. It could only have come from one place.”

There can be no question where this threat came from. It could only have come from one place. https://t.co/2Anhmli6zs

Cohen’s attorney, Brent Blakely, sent a cease and desist letter to Avenatti after the interview, calling Daniels’ statements, “namely that he was responsible for an alleged thug who supposedly visited (Daniels),” were “false and defamatory.”

Cohen’s lawyer fired back almost immediately after the Daniels interview with this letter saying allegation of goon threatening her was false >> pic.twitter.com/TWH2djrFPq

“In truth, Mr. Cohen had absolutely nothing whatsoever to do with any such person or incident and does not even believe that any such person exists or that such incident ever occurred,” Blakely wrote. “You and your client’s false statements about Mr. Cohen accuse him of criminal conduct and constitute, among other claims, libel per se, and intentional infliction of emotional distres.”

Daniels told Cooper that she has risked her safety by speaking out about the alleged affair with Trump. Cooper asked her, “how do we know you’re telling the truth?”

“‘Cause I have no reason to lie. I’m opening myself up for, you know, possible danger and definitely a whole lot of s***,” she responded.

She has boosted security at her home in Texas and has hired bodyguards, according to Inside Edition.

“I have a strangely normal life, yes,” she told Inside Edition. “And then I wake up one morning and there’s news trucks and reporters outside of my house. Now suddenly I’m having to make phone calls to hire security.”

Stormy Daniels: ‘I Hired Security. I Have Been Threatened’The woman who allegedly had an affair with Donald Trump in 2006 says she has been trying to ride out the reported scandal in her home in Texas amid security fears. Stormy Daniels, an adult film star, was reportedly paid $130,000 by President Trump’s lawyer to keep quiet about their alleged affair, which took place months after Melania gave birth to their son, Barron. According to the Wall Street Journal, she signed a non-disclosure agreement when she was paid before the presidential election.2018-01-25T22:23:27.000Z

Daniels, a Louisiana native who is married and has a 7-year-old daughter, alleges that she had an affair with Trump that began in 2006. Trump was married to Melania at the time and she had recently given birth to his fifth child, Barron.

Daniels, who signed a hush agreement with Cohen prior to the 2016 election, is suing to have that agreement ruled invalid.

Daniels was paid $130,000 in hush money by Donald Trump’s personal lawyer, Michael Cohen, before the 2016 election to keep quiet about the affair, according to Daniels’ lawyer, Michael Avenatti. But Daniels, who is suing to have that agreement ruled to be invalid because Trump did not sign it himself, is willing to pay back that money, Avenatti said earlier this month.

“This has never been about the money,” Avenatti, told NBC News. “It has always been about Ms. Clifford being allowed to tell the truth. The American people should be permitted to judge for themselves who is shooting straight with them and who is misleading them. Our offer seeks to allow this to happen.”

Daniels has said she had an “intimate relationship” with Trump in 2006. The White House has denied that the affair occurred.

Cohen has obtained a restraining order from a private arbitrator barring Daniels from disclosing “confidential information,” relating to the agreement, according to NBC News.

“I believe Mr. Avenatti’s actions and behavior has been both reckless and imprudent as it opens Ms. Clifford to substantial monetary liability, which I intend to pursue,” Cohen told The Washington Post.

Daniels could face up to a $1 million fine if she is found to have broken the hush agreement. She started a CrowdJustice fundraiser earlier this month to help with her legal battle.

“I am attempting to speak honestly and openly to the American people about my relationship with now President Donald Trump and the intimidation and tactics used against me,” the page states.

Daniels told Cooper during her “60 Minutes” interview that she signed the hush agreement because she did not want attention and also was concerned for her family.

“The story was coming out again. I was concerned for my family and their safety,” she told Cooper. “I think the fact that I didn’t even negotiate, I just quickly said yes to this v– very, you know, strict contract. And what most people will agree with me extremely low number. It’s all the proof I need.” 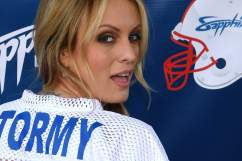 Stormy Daniels’ Net Worth: 5 Fast Facts You Need to Know

Read More
Breaking News, Donald Trump, Editors' Picks, Politics
Stormy Daniels told Anderson Cooper during her "60 Minutes" interview that she and her daughter were threatened in 2011 to "leave Trump alone."