If you tuned in to watch The 100 tonight, then you’re going to get an unwelcome surprise. Instead of Season 5 Episode 6, you’ll be greeted by a rerun episode playing on The CW. What happened to The 100‘s new episode and when will it return?

Unfortunately, we won’t be seeing a new episode of The 100 tonight. But you won’t have to wait long until a new episode premieres. Season 5 Episode 6 will air next week on June 5. So you won’t be waiting too long for the show to come back.

The CW hasn’t announced an official reason why we don’t have a new episode tonight, but there are a couple different possibilities. The show’s absence this week is likely due to a combination of the Memorial Day holiday and planning for July Sweeps.

Memorial Day was yesterday, and that means The 100 might not want to air a new episode the day after the holiday. It doesn’t make a lot of sense, but it’s certainly one possibility. There don’t appear to be any major sports events happening tonight that would compete with the show. And nothing major is airing on The CW tonight either, just a rerun of The 100.

So more than likely, the decision to take a hiatus has to do with July Sweeps. The CW often builds hiatuses strategically into its series to make sure they can take advantage of sweeps. Last year, for example, The CW put The 100 on a three-week break in April because of Sweeps. This year, May Sweeps took place from April 26 – May 23. That means that last week’s phenomenal episode was the last major episode of The 100 during May Sweeps.

Typically the season ends before July Sweeps happens, but because the show started later this year, The CW will actually be able to air the show during summer sweeps, which is June 28-July 26. Since we have about two months of episodes left, The CW likely wants to make sure they air some of their best episodes during July Sweeps.

Last week’s episode brought some pretty crazy theories to fans’ minds. The way Octavia was talking to Bellamy, some believe that Octavia might turn into the villain before the season is over. Other fans are concerned that something bad happened to Niylah, since we haven’t seen her in a while. Still other fans think that Wonkru might have descended into cannibalism to survive. And some fans are still trying to figure out how those missiles missed their target last week. What question are you trying to answer, and what theory are you afraid might be true?

It’s already being reported that next season is going to be 13 episodes long, which is a disappointment to some fans who wanted a longer season. However, other fans point out that this means we won’t have any dreaded “filler” episodes. (But in The 100 universe, is any episode very truly a filler episode?) 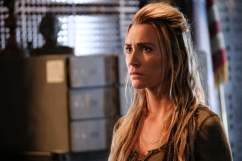 Loading more stories
wpDiscuz
0
0
Would love your thoughts, please comment.x
()
x
| Reply
Sadly, The 100 isn't on tonight. Find out when it's going to return.