Amy Coney Barrett’s name is being raised again as a possible nominee to the U.S. Supreme Court now that Ruth Bader Ginsburg has died.

At only 48-years-old, Barrett also satisfies a potential criterion if Trump wishes to shape the court for generations: Relative youth. Is she a liberal or conservative, though? What are her political leanings if they can be determined? The Washington Times has reported that Barrett is considered a front runner for the nomination.

You can read her Judiciary Committee questionnaire from when she was nominated to the federal bench here.

Trump Appointed Barrett to the Court of Appeals

This lady has liberals quaking in their boots right now. Amy Coney-Barrett could be @POTUS bold pick for #SCOTUS. She is a woman ✅ She is young ✅ She is hot ✅ She has 7 kids ✅ She is not from Yale or Harvard ✅ She would be on the court for 40 years ✅. Love it! pic.twitter.com/On5mqdQchB

Amy Coney Barrett has passed Trump’s muster before; Trump appointed her to the 7th Circuit Court of Appeals in Chicago. She was confirmed on October 31, 2017.

According to Bloomberg, when she was confirmed, all Republicans voted for her and three Democrats did as well (Joe Donnelly of Indiana, Tim Kaine of Virginia, and Joe Manchin of West Virginia).

She is a member of the conservative Federalist Society.

Barrett Is a Devout Catholic

Trump Says He Might Name a Woman to Supreme Court: Why Evangelicals Are Rooting for Amy Coney Barrett https://t.co/IYIpP7gNe9

According to National Review, Amy Coney Barrett is considered a devout Catholic. She is also the mother of seven children. “…she speaks about God as if she really believes in His existence,” the conservative website National Review reported of Barrett’s faith.

In 2017, U.S. Senator Dianne Feinstein (D-California) caused controversy when Barrett was nominated to the federal appellate court by bringing up her religion and saying she was concerned “the dogma lives loudly within you.”

Barrett belongs to a “small, tightly knit Christian group called People of Praise,” The New York Times reported in September 2017. According to The Times, the group’s members “swear a lifelong oath of loyalty, called a covenant, to one another, and are assigned and are accountable to a personal adviser, called a ‘head’ for men and a ‘handmaid’ (now woman leader) for women. The group teaches that husbands are the heads of their wives and should take authority over the family.”

The Times reports that members of the group take direction from the heads and handmaids on major decisions, even down to whom they marry. According to the Times’ interviews with current and former members, Barrett, her husband, and both of their fathers are members of the group. Her husband is Jesse M. Barrett, who is an Assistant U.S. Attorney for the Northern District of Indiana, according to The Commercial Appeal.

The Catholic League wrote an article challenging depictions of People of Praise as a cult and arguing Barrett is unfairly subjected to scrutiny for her Catholicism, writing, “Among other things, it operates interracial schools and camps, and provides for many family outings; members often travel together. Is it a Catholic fringe group? No, for if it were, Pope Francis would not have welcomed it in June: he celebrated with them, and others, the 50th anniversary of the Catholic charismatic renewal; the event drew over 30,000 people from 128 countries.”

The Catholic League article continues, “Praise for People publishes a magazine, V&B (Vine and Branches), that offers concrete proof that it is anything but a cult. The cover story of the Winter 2014 edition was called, ‘Looking at Marriage.'” The Catholic League says the group “was founded in 1971 in South Bend, Indiana. Today it has branches throughout North America and the Caribbean” and “aligns itself with ‘the Pentecostal movement or the charismatic renewal.’”

The group’s website describes itself as “an ecumenical, charismatic, covenant community. Our model and inspiration is the first Christian community, a small band of disciples who ‘were of one heart and soul’ and ‘held all things in common.’ (Acts 4:33, 2:44). We can be difficult for the public and the press to understand. In truth, we are a community that defies categories.”

The website describes the group’s missionary work and says it’s open to more than Catholics. “In Evansville, IN, a group of People of Praise missionaries moved into two houses at a notorious intersection, a place locals called ‘the devil’s corner’ because of all the fights and drug deals. We didn’t arrive with any program or magic formula, but hoped to encounter neighbors in a spirit of Christian friendship,” the site explained. The group claims the covenant is not an oath or vow.

According to The Federalist, which believes concerns about the group are unfair, “It is perhaps worth noting that Pope Francis named a member of this group auxiliary bishop of Portland in 2014, so membership in the group must not be disqualifying in the eyes of the Vatican.”

The Christian Broadcasting Network reported that evangelicals were “buzzing about Amy Coney Barrett.” David Brody, CBN’s Chief Political Correspondent, told the network, “Many of my sources, evangelical in nature, love her. They believe that she is the one that if they had their dream pick that she would be the one. Barrett has been very outspoken of her Catholic views and God.”

She Clerked for Antonin Scalia

Amy Coney Barrett was once a clerk for iconic conservative Supreme Court Justice, the late Antonin Scalia. Barrett was also a Notre Dame law professor before joining the federal bench.

According to The Los Angeles Times, Barrett also clerked for D.C. Circuit Judge Laurence Silberman. He was a Ronald Reagan appointee.

What Are Barrett’s Views on Roe v. Wade? 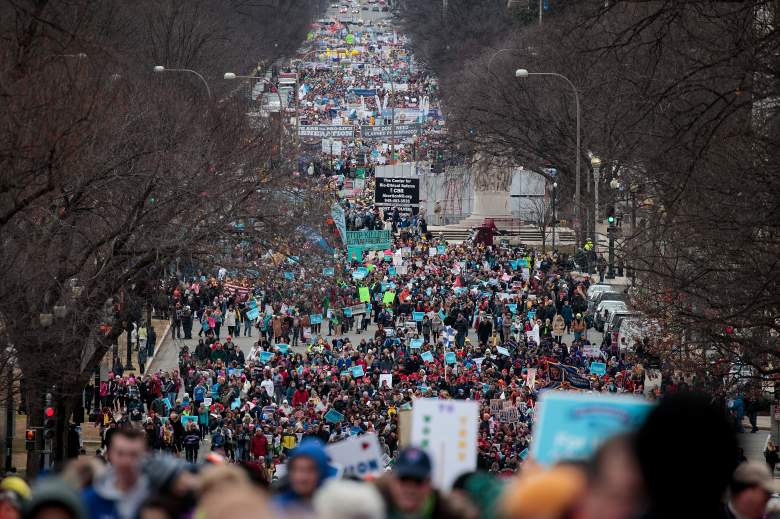 GettyThousands of people march on Constitution Avenue during the March for Life, January 27, 2017 in Washington, D.C.

Barrett has indicated she believes life begins at conception, the LA Times reported. “In a 2003 scholarly article, she suggested Roe vs. Wade was an ‘erroneous decision,'” The Los Angeles Times reported. That stance would likely provoke a massive showdown in a nomination fight if Barrett is picked. However, National Review has challenged the Times’ reporting, saying the newspaper misread the citation, which “does not remotely ‘suggest’ any view of the scholar on Roe.”

While a professor at Notre Dame, Barrett was a member of a group called “University Faculty for Life” from 2010-2016, according to her Judiciary Committee questionnaire. That group’s mission statement starts, “University Faculty for Life was founded in 1989 to promote research, dialogue and publication by faculty who respect the value of human life from conception to natural death. Abortion, infanticide and euthanasia are highly controversial topics, but we believe they should not be resolved by the shouting, news bites and slogans that have dominated popular presentations. Because we believe the evidence is on our side, we would like to assure a hearing for our views in the academic community.”

In 2013, Notre Dame Magazine published an article by associate editor John Nagy on students and faculty marking “20 years of Roe.” How Barrett would decide abortion cases on the Supreme Court would be a focal point of any confirmation fight as liberals express concern that a more solidly conservative court could over turn Roe v. Wade.

The magazine article reports that “Barrett spoke both to her own conviction that life begins at conception and to the ‘high price of pregnancy’ and ‘burdens of parenthood’ that especially confront women before she asked her audience whether the clash of convictions inherent in the abortion debate is better resolved democratically.”

The article says Barrett gave a presentation called “Roe at 40: The Supreme Court, Abortion and the Culture War that Followed.”

The article continued: “By creating through judicial fiat a framework of abortion on demand in a political environment that was already liberalizing abortion regulations state-by-state, she said, the court’s concurrent rulings in Roe and Doe v. Bolton ‘ignited a national controversy.’ Barrett noted that scholars from both sides of the debate have criticized Roe for unnecessarily creating the political backlash known colloquially as ‘Roe Rage.'”

However, she said she thought it was “very unlikely” the court would ever overturn Roe and she “sees the political battle shifting toward matters of public and private funding,” according to the magazine.

According to The Los Angeles Times, the list of 25 possible candidates, which includes Barrett’s name, was compiled by “the conservative Federalist Society and Heritage Foundation.” The writings and decisions of each of the 25 were scrutinized, the Times reported, as the groups want to avoid a situation like that of former Supreme Court Justice David Souter in which the candidate turned out to be more liberal than expected because his views were little known.