Kayla Sprinkles, a 26-year-old former high school social studies teacher and softball coach from North Carolina, is accused in the sexual assault of a student.

The Cherokee County Sheriff’s Department announced the June 7, 2018 arrest in a Facebook post complete with mugshot. Sprinkles also goes by the name of Kayla Alayne Sprinkles, and she is from Hayesville, North Carolina, the sheriff’s release revealed. The accusations involve a time when Kayla Sprinkles was a teacher and coach at Andrews High School, which is located about a half hour from Hayesville in Andrews, NC. Kayla Sprinkles is but the latest female teacher to be accused in the United States of sexual misconduct with a student. You can see some other examples later in this article.

Marissa Yebba, a former student at Andrews High School who had Sprinkles as a teacher, told Heavy in an interview that Sprinkles “was teaching History, American History 1 & 2 and also couching softball. She was one of the top teachers all students liked.” Yebba was one of several people to speak out in the teacher’s defense on Facebook.

1. The Sheriff Says a Grand Jury Brought Down a Five Count Indictment for Alleged ‘Sex Acts With Student’

The Sheriff’s Department executed multiple search warrants “in which items of evidence were collected. Additionally numerous individuals were interviewed who provided information relevant to the case. The HAVEN Child Advocacy Center assisted in some of the interviews due to the age of the individuals interviewed,” says the release.

On June 4, 2018, a Cherokee County Grand Jury handed down a five count indictment for alleged “Sex Activity With a Student” against Kayla Sprinkles, according to the sheriff’s release. Further details of the alleged offenses were not revealed. At the time of the alleged sexual misconduct Sprinkles was a new teacher at the high school, People reported; she no longer works there.

2. Authorities Accuse Sprinkles of Leaving the Area After Gaining Knowledge of the Indictments, Possibly Through Social Media

Sheriff’s officials allege that Sprinkles initially left the area, but she is now in custody. “Apparently Sprinkles gained knowledge, possibly through a social media posting, of the existence of the indictments and left from the local area and surrendered herself to the Mecklenburg County Detention Center where she was served with the indictments and was released on a $25,000.00 unsecure bond. Sprinkles is expected to be in Cherokee County Superior Court on July 02, 2018,” the sheriff’s news release says.

“Our youth and our students are one of the greatest resources that Cherokee County is blessed to have. It is incumbent upon all of us to ensure their safety and wellbeing as they grow and mature,” the sheriff said in the release.

“Due to the nature of the crime and the age of the victim no further information will be released concerning this incident,” the release added, but it encourages people with any information to call 828-837-3144 or submit a tip at crime.tips@cherokeecounty-nc.gov.

However, at least one former student had positive things to say about Sprinkles.

Yebba, the former student of Sprinkles, told Heavy in an interview that she met Sprinkles “my Freshman/Sophomore year of high school. She was my American History teacher and softball coach. She was a really great person. She helped me through a lot of my problems when people were putting me down through high school.”

Yebba, who also left a comment on the Sheriff’s Department Facebook page in support of Sprinkles, added in the interview: “She was really supportive over everything I would do. She’s from Hayesville.” She said that Sprinkles dreamed of joining the Air Force and was working on becoming a paramedic, which is why she left Andrews High School.

“She was pretty much my go to in High School,” Yebba said. “She would be there for anyone that was in need. She’d give the shirt off her back for someone else that needed it that’s how caring she was. She was just all around a great person.” 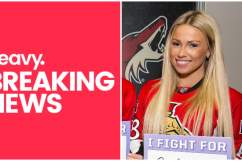 3. Sprinkles Was a Coach at the High School Too

Sprinkles was a teacher at Andrews High School, and the student accuser in the case is 16. You can see another photo of Sprinkles here in the Andrews Journal, which described her as a former teacher and coach.

In 2016, the Citizen Times reported, “Kayla Sprinkles has been hired to coach the Andrews cross country teams. Spinkles has previously been an assistant girls basketball and softball coach for the Wildcats. She teaches social studies.” A woman wrote on the sheriff’s Facebook page, “Kayla Sprinkles was a 7th grade teacher at MMS the beginning of the 2017/18 school year. She was my son’s homeroom teacher.”

Sprinkles’ relationship “with the pupil is alleged to have lasted from around December 2016 to April 2017.” Sprinkles was a runner. An old LinkedIn page in Sprinkles’ name says she worked at a car dealership in tiny Hayesville, North Carolina, as a customer service representative back in 2012, was a waitress at a family restaurant, did custodial work for a Baptist church, and was an assistant manager at a printing company. She graduated from Hayesville High School in 2009, and attended Western Carolina University in secondary social science education.

Court records show Sprinkles is being held on $25,000 bond. On Facebook, most of her public posts are pictures with family. She did like a story about Miranda Lambert and Blake Shelton as well as a website on glow-in-the-dark paint and Outback Steakhouse.

4. Sprinkles Was Described as a ‘Great Person’ but Others Expressed Outrage

In the comment thread of the sheriff’s post, one woman came to Sprinkles’ defense, writing, “I honestly don’t believe this at all. She was a great teacher and a great person. I grew up in this town and moving out of it was the best choice I’ve ever made. I still love to come back and visit but sadly this town is going downhill fast. All you need is money and the right last name and you can get away with anything. And the system there sucks too. I hope she gets a fair trial.”

Another man wrote, “I don’t believe this much, I never personally meet her but I have had grandkids that have had her as a teacher and from what I have heard from them as she sounds innocent.” Yebba wrote on the page, “Kayla Sprinkles was my teacher for 2 years and couch (sic) me in ball! She lived in Hayesville and was willing to drive from Hayesville to Andrews every single day to teach us students.”

However, another woman wrote of the accusations, “I don’t understand why these young women teachers keep ruining thier (sic) lives, ruining kids lives and all families related to both, giving teachers a bad name.”

5. Multiple Female Teachers in the United States Have Ended Up in Trouble With the Law

Female teachers or educational professionals ending up in mugshots has become a too common phenomenon over the past few years. Haley Reed, a high school choir director, was accused in the rape of a student. Miranda Pauley, a former biology teacher, was accused of taking indecent liberties with a minor.